In a bullish outlook for the growth of U.S. liquefied natural gas (LNG) exports by 2024, an energy analyst with the Mizuho Securities LLC’s energy research group said the expansion will include both small-scale and mega projects. 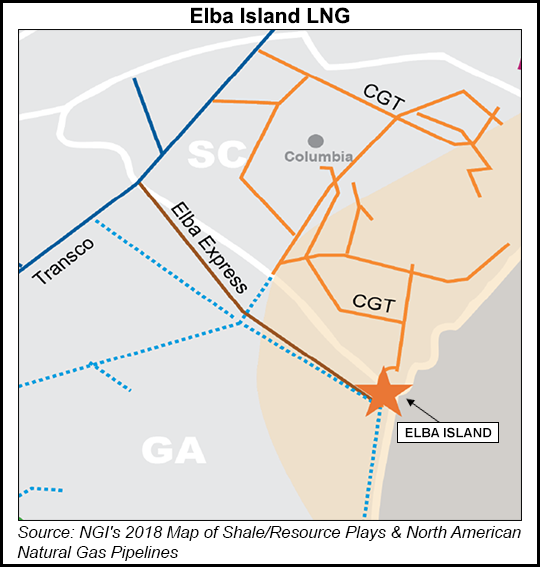 Smaller facilities are looking to drive down costs significantly, according to Mizuho analyst Tim Rezvan. U.S. LNG exports will hit a projected 53 Bcf/d, or 400 metric-tons-per-annum (mtpa), in 2024, compared to totals last year of 34 Bc/f/d, or 260 mtpa, he said.

“The United States is expected to be competitive in fighting for market share, given the deep inventory of low-cost natural gas available,” Rezvan said.

Rezvan called out three small-scale projects slated for startups in the early 2020s — Driftwood LNG, Rio Grande LNG and the re-emergence of Elba Island for an export project at an old import terminal site near Savannah, GA.

Tellurian Inc.’s Driftwood LNG project and associated Driftwood pipeline in Louisiana are slated to begin operation in 2022. Tellurian has a pending FERC filing for the project. In September, Tellurian pushedinto the upstream sector, making a deal to buy gas-laden Haynesville Shale acreage near its planned natural gas export facility in Louisiana.

NextDecade LLC’s Rio Grande LNG terminal is holding U.S. Department of Energy (DOE) authorization to export natural gas to free trade agreements (FTA) nations, using a partnership to market its proposed LNG facility on the Texas Gulf Coast near Brownsville. The Woodlands, TX-based NextDecade’s DOE authorization allows exports of up to 27 mtpa of LNG — roughly equivalent to 3.6 Bcf/d — over 30 years. NextDecade plans to build the facility on a 1,000-acre industrial site at the Port of Brownsville

In 2016, FERC approved Kinder Morgan Inc.’s (KMI) plan to add liquefaction and export capability to the Elba Island LNG Terminal near Savannah, GA, as well as make modifications to existing pipelines in support of the project.

KMI’s Elba Liquefaction Co. LLC and Southern LNG Co. LLC received FERC authorization for the $2 billion Elba Liquefaction Project. The first of 10 liquefaction units is expected to be placed in service in the second quarter of 2018, with the remaining nine units coming online before the end of 2018.

The North Dakota Industrial Commission has extended until Aug. 15 the deadline to submit proposals for a natural gas pipeline connecting the western and eastern portions of the state. The state legislature in 2021 approved $150 million in grants to fund the project, stipulating that $10 million of the total must be used for a…