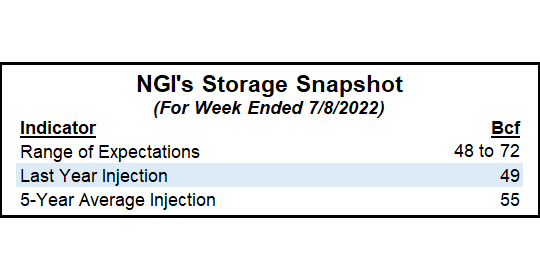 NGI’s Spot Gas National Avg. failed to follow suit, however. It fell 19.0 cents to $6.630 as prices in the South and West pulled back following outsized gains earlier in the week.

Amid a spate of maintenance-related interruptions, production dipped below 94 Bcf on Tuesday – from recent highs near 96 Bcf – and did not budge in estimates Wednesday. This raised concerns about supply/demand imbalance as summer heat persists and the government’s next storage report looms.

Forecasts call for continued lofty temperatures through July and into August, following a record hot June across swaths of the Lower 48.

NatGasWeather said the next two weeks “remain hot and bullish, especially July 17-26.” For that period, “hot high pressure will rule most of the U.S., with highs of 90s to 110s for strong to very strong national demand, including dangerous heat” in the Southwest and parts of Texas.

Demand for U.S. LNG exports, meanwhile, remains elevated. Feed gas volumes have held above 11 Bcf/d throughout July. This effectively has American export facilities operating at full capacity, with the exception of the sidelined Freeport liquefied natural gas plant in Texas.

European demand is elevated and expected to remain so amid Russia’s war in Ukraine. Countries across Europe are at once trying to gradually wean themselves of Russian gas and bracing for the Kremlin to cut them off this summer in retaliation. To address potential shortages, Europe is calling for all the LNG it can get this summer, and the demand is expected to continue through the year.

Punctuating concerns: Russia’s Gazprom PJSC said in a Wednesday statement that vital equipment needed from Canada to repair and restart its Nord Stream 1 (NS1) pipeline remained on delay, potentially dashing hopes of a speedy restoration of natural gas to Europe.

NS1 was scheduled to undergo annual maintenance from Monday through July 21. It has delivered zero flows into Europe since the maintenance began, amplifying supply worries in Europe. Gazprom previously reduced western gas flows to about 40% of total capacity on the NS1 pipeline.

What’s more, the International Energy Agency (IEA), citing the concerns of government officials in Europe, cautioned that Russia may not resume flows to the continent even after the NS1 maintenance work culminates. IEA said Russia could do this to lash back against Western sanctions.

“Europe is on edge and the region is counting down the days until Nord Stream 1 is scheduled to return to its already sub-optimal operational level,” Rystad Energy analyst Nikoline Bromander said.

The continent “needs supplies now to build up its stocks before” winter. “Ample uncertainty surrounding Russian supplies remains amid persistent fears of the continent running out of gas during the heating season,” Bromander added.

With all of the competing interests in U.S. supplies, the market will turn next to Thursday’s Energy Information Administration (EIA) storage report, which covers the week ended July 8.

Ahead of the print, median injection estimates of major surveys hung in the high-50s Bcf.

Results of Bloomberg’s poll showed a median injection projection of 58 Bcf, with a low estimate of 53 Bcf and a high of 72 Bcf. Reuters’ survey produced injection estimates that spanned 48 Bcf to 69 Bcf. It landed at a median of 57 Bcf.

A Wall Street Journal poll found an average injection expectation of 61 Bcf, and it also generated a range of 48 Bcf to 69 Bcf.

From a price perspective, the estimates compare bearishly with an injection of 49 Bcf during the comparable week last year and a five-year average injection of 55 Bcf. Analysts have noted the ongoing Freeport LNG export outage, which has freed up more gas for domestic storage.

EIA most recently posted a storage build of 60 Bcf for the week ended July 1 — about 15 Bcf lighter than expectations. The injection boosted inventories to 2,311 Bcf. Still, it left stocks 322 Bcf below the five-year average.

Spot gas prices fell short of advancing for a third time this week despite searing heat and strong summer temperatures across most of the Lower 48.

NatGasWeather said demand held strong amid high temperatures Wednesday that ranged from the upper 80s in the Midwest to above 110 degrees in southern and western deserts.

However, after prices spiked across the South and West to start the week, prices leveled off or declined Wednesday in most regions.

The Southeast region, where prices on average plunged more than $1.00, stood apart. Prices there had soared in recent days amid stifling heat and elevated humidity levels. Wednesday’s decline led the national average lower, but prices in the region remain among the highest in the country.

Prices elsewhere in the East pulled back slightly ahead of expected cooler weekend conditions.

“A weather system with showers and comfortable highs of 70s and 80s” will track from the Great Lakes into the Northeast late in the week “to ease national demand slightly,” NatGasWeather said. “However, hot high pressure will expand to again rule most of the U.S. next week,” driving robust air conditioner use.

The firm expects more of the same late in July. Peak temperatures in the 90s on up are expected for most of the country, with the Northwest and New England the likely exceptions.

Southern markets are again expected to see the most extreme triple-digit highs.

“Persistent high pressure over the southern United States has been the predominant meteorological cause of this summer’s heat. This has generally created conditions for sinking air, which has led to clear skies and sunny days,” forecaster Eric Berger of Space City Weather in Houston said in a report Wednesday.

“This provides ideal conditions for daytime heating, and outside of one week in late June and early July, we just haven’t had much of a break from this pattern,” he added. “We expect the high pressure pattern to mostly persist at least for the next couple of weeks.”