After trading sideways for the better part of Wednesday’s session, natural gas futures surged in the last half hour as the tight global supply backdrop provided bulls the justification for another rally. The November Nymex gas futures contract settled at $5.170/MMBtu, up 8.2 cents on the day. December edged up 9.7 cents to $5.447. 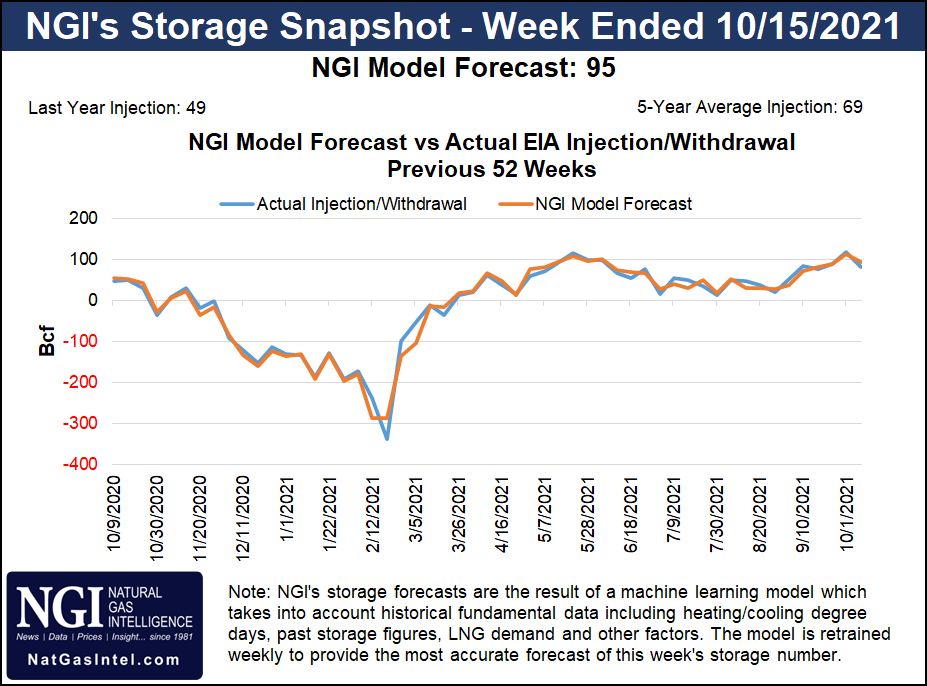 Price action along the futures curve remained volatile midweek, with prices down by more than a dime not long after the session opened. The November Nymex contract dropped to a $4.912 intraday low before popping back into the green. After another dip into the red, the prompt month bounced off support again, this time surging to a $5.221 intraday high.

“The latest Global Forecast System data added a little demand, but to no surprise since it had gotten so bearish it couldn’t be much more,” NatGasWeather said.

While it’s possible the small demand gain in the latest weather model aided the late-session rally, the firm said it’s more likely that prices were influenced by trade in Europe and Asia, where the expectation is that prices are to remain strong. NatGasWeather noted that “speculators use tight supplies in Europe and Asia to justify high prices, which they did again” Wednesday with Title Transfer Facility closing up nearly 4%.

“With that said, the longer it takes for widespread freezing temperatures to arrive over the U.S., Asia and Europe, the more pressure it will put on bulls to reduce risk,” NatGasWeather said.

Will Balances Continue To Loosen?

Until then, the U.S. weekly storage inventory data could dictate where prices go in the near term. Last week’s Energy Information Administration (EIA) storage report surprised to the downside, revealing a lower-than-expected 81 Bcf injection into stocks for the week ending Oct. 8.

Market observers were quick to point out that low wind generation likely led to more robust gas consumption in the power sector during the reference week. However, a strong recovery in wind output could loosen up balances reflected in Thursday’s EIA report.

Analysts responding to major surveys projected a build near 90 Bcf for the week ending Oct. 15. Reuters polled 17 analysts, whose estimates ranged from builds of 80 Bcf to 97 Bcf, with a median injection of 90 Bcf. The average of 14 estimates in a Wall Street Journal poll also landed at a 90 Bcf injection. The median of a Bloomberg survey, in which projections ranged from 84 Bcf to 95 Bcf, was 91 Bcf. NGI modeled a 95 Bcf increase in inventories.

Last year, the EIA recorded a 49 Bcf injection in the similar week, while the five-year average is a 69 Bcf infection.

Bespoke Weather Services, which pegged the build at 90 Bcf, said there is some downside risk to the figure. However, even a slightly lower injection would prevent it from being looser week/week.

“The main factor to watch, moving forward, will be the weather,” the forecaster said. “Our ideas would bring more pressure to prices, favoring a November warmer skew, for now.”

EBW Analytics Group agreed that a potential weather shift remains the “critical wildcard” for the Lower 48. Recent warm weather appears likely to continue into early November, but the progression of the Madden Julian Oscillation into Phases 4-5 could finally dislodge the current milder-than-normal paradigm.

While the second week of November is likely to see remnants of warmer weather from the central United States to the East Coast, cooler temperatures by mid-November could dramatically shift market sentiment, according to EBW. The firm noted that weather forecaster DTN has cautioned that while model guidance on atmospheric drivers is fairly well aligned, temperature anomaly outcomes remain more bearish than analogs suggest is likely.

“The 16- to 30-day forecast shows heating demand nearly even with 30-year normals and 65 gas-heating degree days above year-ago levels,” EBW said. “If it verifies, the forecast would likely arrest declines and could reinflate Nymex winter risk premiums by early to mid-November.”

The EBW analyst team said the importance of weather is magnified with supply and demand both relatively price-inelastic in the short run. With little ability to modify natural gas demand via coal-to-gas or gas-to-coal switching near current price levels, the market is particularly exposed to any weather demand shocks heading into early winter.

“Currently, market positioning suggests the need for at least modest cold, or recent declines may extend to the low-to-mid $4.00/MMBtu range,” EBW analysts said. “Any significant cold shot before Thanksgiving, however, could return prices toward recent highs north of $6.00/MMBtu.”

Spot gas prices snapped a multi-day losing streak amid a series of weather systems moving across the country. Gains were most pronounced in the West, where the “first in a parade of Pacific storm systems” slammed the Pacific Northwest midweek.

The National Weather Service (NWS) said additional storms were forecast for the next five to seven days, with rain expected in the valleys and coastal areas. Snow was likely in the highest elevations of the Cascades and Shastas. A second and more intense Pacific low was seen approaching on Thursday, with the storm pumping ample amounts of precipitation into Northern California and the Pacific Northwest.

Cold weather eventually reaches the East Coast by Friday, according to NWS, allowing for “a cool, crisp air-mass” to return across the Northeast for the upcoming weekend.

A couple of pricing locations in the Midcontinent posted more significant increases, with Ventura climbing 29.0 cents to $4.845.

In the Midwest, Michigan Consolidated cash was up 26.5 cents to $4.835.The majority of locations on the East Coast saw price increases of less than 25.0 cents day/day. One exception was Tennessee Zone 4 Marcellus, which tacked on 30.0 cents to average $4.205.