Natural gas futures continued to bounce around like a pogo stick, with bulls buying the early dip in Wednesday’s trading session and near-term heat fueling the rally. The July Nymex gas futures contract settled at $6.858/MMBtu, up 5.0 cents on the day. August futures climbed 8.9 cents to $6.872. 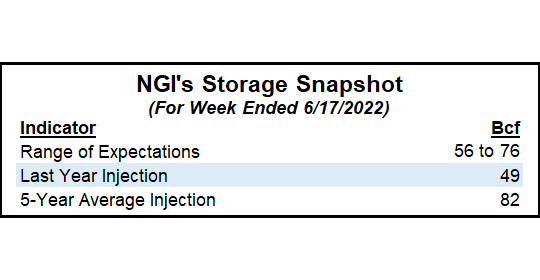 With liquefied natural gas (LNG) demand already hampered by the outage at the Freeport terminal, a further decline in feed gas deliveries helped drag futures lower early Wednesday. Some analysts noted that gas deliveries to U.S. LNG facilities slipped to around 10.5 Bcf. However, NGI’s U.S. LNG Export Tracker data pointed to a recovery in feed gas volumes, back up to around 11.2 Bcf.

Production data, meanwhile, may show gains month/month in June. EBW Analytics Group said pipeline nomination patterns often reveal a phantom drop in production on the first of the month offset by stronger readings toward the end of the month. This occurred in April and May, and it may happen again in June, it said. Further, some producers may bring well pads online at the end of June to boost second quarter exit rates ahead of earnings season.

For now, though, the blistering heat penetrating much of the Lower 48 this week ultimately gained the upper hand. With widespread daytime highs in the 90s and low 100s across the southern two-thirds of the country, the suffocating heat drove momentum along the futures curve into the close. The July Nymex contract ultimately settled only a few cents behind the intraday high of $6.930.

Bespoke Weather Services said the latest weather data continued to show a return to more seasonal temperatures in the final days of June and into early July. Still, the firm noted that it’s been wrong before. There is a risk that the weather pattern can move “materially hotter” again.

“Hot weather is really the key in negating a chunk of what Freeport gave back to storage,” Bespoke chief analyst Brian Lovern said.

The market should get another glimpse into the impacts the Freeport explosion and subsequent outage have had on storage when the Energy Information Administration (EIA) releases its weekly inventory data. The storage report, to be published at 10:30 a.m. ET on Thursday, covers the week ending June 17.

Ahead of the latest storage data, Reuters polled 13 analysts, whose storage injection estimates ranged from 56 Bcf to 76 Bcf, resulting in a median increase of 66 Bcf. A Bloomberg survey produced a lower median projection of 59 Bcf, though the range of estimates was the same. A Wall Street Journal poll, meanwhile, had a tighter forecast range, with an average build of 66 Bcf.

By comparison, the EIA recorded a build of 49 Bcf during the same week a year ago, while the five-year average injection is 82 Bcf.

EBW noted that taking into account the Freeport outage, the storage trajectory this injection season has increased from slightly above 3.3 Tcf to 3.52 Tcf. This would leave stocks within 120 Bcf of the five-year average by the end of October.

“Freeport’s announcement calls for a ‘resumption of partial operations’ in 90 days, but that full plant operations remain unlikely until ‘late 2022,’” Rubin said. “Further delays are possible – or even likely – with the need to secure materials amid supply chain shortages, procure specialized labor, conduct repairs and achieve requisite government approvals before restarting operations.”

The analyst noted that sustained demand losses remain more likely than an early return to service. Nonetheless, even with the full 2.0 Bcf/d Freeport outage through mid-September and only slowly rebuilding lost demand through the end of the calendar year, the end-of-March storage outlook in a normal weather scenario remains at only 1,125 Bcf.

“In other words, while Nymex futures have been delivered a near-term reprieve from building upside price pressures, the longer-term storage outlook remains too low – and upside could still rebuild later this year,” Rubin said.

Great Lakes Gas Transmission declared a force majeure that began Tuesday (June 21) because of an equipment failure at the Iron River Compressor Station No. 6 in Bayfield, WI. As a result, capacity was to be reduced by 33 MMcf/d through July 1. Past 30-day average flows eastbound through Iron River were about 1.59 Bcf/d and maxed at 1.73 Bcf/d, according to Wood Mackenzie.

ANR Pipeline also experienced an unexpected outage at the Cottage Grove Compressor Station on the SE Mainline in Henry, TN. This effectively lowered capacity by 200 MMcf/d through Friday. Wood Mackenzie said average flows southbound through Cottage Grove for the past 30 days were about 942 MMcf/d, maxing out at 1,039 MMcf/d.

Meanwhile, Colorado Interstate Gas (CIG) was expected to see reduced flows during a scheduled emergency shut down test Wednesday (June 22) at the Baxter to Wamsutter Compressor Station along Segment 110 in Sweetwater, WY.

Despite the various maintenance events, price action across the country was fairly quiet as increases were moderate compared to recent days.

Midwest and Midcontinent next-day gas prices also picked up only a few cents day/day, while several locations in Louisiana finished in the red.

East Coast prices were a mixed bag, with most Appalachia locations strengthening and the Northeast region split. Transco Zone 6 NY spot gas was up 12.0 cents to $5.900, but Tenn Zone 5 200L was down a half-cent to $6.130.California markets, meanwhile, posted some of the most significant price increases. SoCal Citygate next-day gas jumped $1.075 to average $7.725.