Physical natural gas for Thursday delivery rose nearly across the country on Wednesday with the exception of eastern points, many of which posted stout double-digit losses. The NGI National Spot Gas Average fell a penny to $2.61. 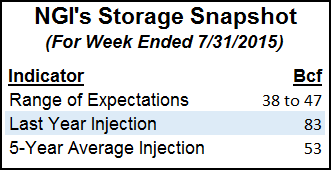 The Aug. 1 expansion of Rockies Express Pipeline, REX Zone 3, to allow for east-to-west (E2W) service from its easternmost point in Clarington, OH, to Moultrie, IL, has received a lot of attention, and for the moment price differentials between western locations on REX Zone 3 appear to be holding their premiums to the primary receipt point in Ohio, as well as traditional Marcellus pricing points.

Sheetal Nasta, in a report by RBN Energy earlier in the week noted that this past weekend’s expansion of REX capacity “will not result in overnight changes to pipeline flows in Zone 3. These changes will take longer to occur because they rely on the addition of new receipts into the mainline pipe from suppliers in the Marcellus and Utica that will take time to get connected in order to fully utilize all of the new capacity.

“So while the completed E2W expansion opens up potential access to new markets for expanding Marcellus/Utica production, the market significance of this change will be determined by how rapidly the new capacity is taken up to meet new westbound receipts and deliveries.” The key “is how well receipt and delivery capacities line up with the new westbound pipeline capacity.”

One Houston-based industry veteran said he “expects that there are some folks who are pleased that there is now the capacity for them to flow gas west.” He added that he hadn’t heard a whole lot of mention about the Aug. 1 ramp up, but expects to in the coming weeks.

“It’s no different than everyone trying to find the fastest way home from work. If everybody and his brother goes the same way, it’s going to back up again. Once everything is open and all this gas hits these markets, there will be a lot of competition to get the price.

“Markets on the receiving end are likely to say ‘today I want Index -5, but tomorrow I’ll try for Index -10. That was too easy, I want Index-20.’ I have heard people say ”I am waiting for Index -30.’ It can also go the other way when demand is high.”

Next-day gas prices at eastern points floundered. Thursday gas at the Algonquin Citygate shed 28 cents to average $1.43, and gas on Millennium was seen at $1.25, down 7 cents. Deliveries to Dominion South shed 8 cents to $1.27, and gas on Tennessee Zn 4 Marcellus fell a penny to $1.16. Packages on Transco-Leidy Line changed hands 7 cents lower at $1.26.

Industry consensus for Thursday’s Energy Information Administration storage report appeared to be congesting in the 40- to 45- Bcf range, well below last year’s 83 Bcf injection and less than the five-year average of 53 Bcf. Evans predicted a fill of 40 Bcf and, taking into account weather forecasts, sees the year-on-five-year surplus sliding from 85 Bcf to 60 Bcf by Aug 21.

“We see this tightening, particularly in contrast to the moderately bearish scenario of a week ago, as giving natural gas a fresh chance at an intermediate-term short-covering rally back above the $3.00 mark,” Evans said.

His earlier long position was stopped out for a modest gain, and he said he is currently on the sidelines, “but with an eye toward opening a long position once we can identify a low-risk entry point.”

Longer term, WSI reported a slight cooling in both its six- to 10-day and 11- to 15-day outlooks with population-weighted cooling degree days decreasing by one in each case.

Futures traders are anticipating one of the leanest storage builds of the season in the inventory report. Last year a plump 83 Bcf was injected and the five-year pace is 53 Bcf. IAF Advisors of Houston calculated an increase of 39 Bcf and ICAP Energy is looking for a 39 Bcf build as well. A Reuters survey of 42 traders and analysts revealed an average 42 Bcf with a range of 38 Bcf to 47 Bcf.