Natural gas supplies are on the rise in British Columbia (BC) even though drilling, slowed by weak prices, has barely scratched the surface of the province’s northern shale deposits. 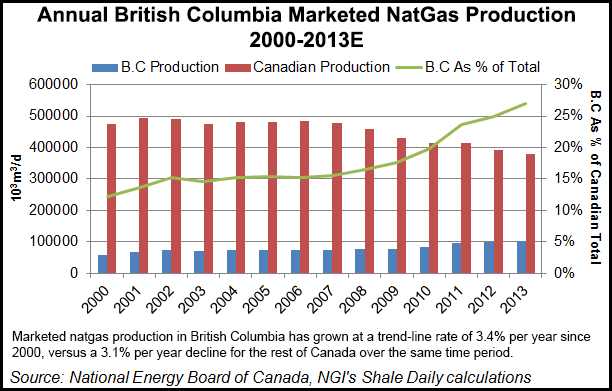 Proven reserves in Canada’s second biggest producing jurisdiction after Alberta are up by 16% to 40.2 Tcf from 34.6 Tcf last year, according to the latest official count by the BC Oil and Gas Commission (BCOGC).

“Unconventional reservoirs have tremendous growth potential, with booked reserves representing less than one per cent of current total resource estimates,” added the agency. Prospective resources — the gas volumes estimated to be available for future drilling, as opposed to currently under development by industry — add up to an astronomical 2,823 Tcf in northern BC.

The enormous estimate is liable to go higher in future years because only two of four big BC shale formations has been systematically studied to date by cooperating teams of earth scientists at the BCOGC, the National Energy Board (NEB) and other federal and Alberta agencies.

A report released last fall estimated the gas in the Montney formation at 1,965 Tcf. The less well-known, remoter Horn River Shale structure is currently estimated to harbor 448 Tcf. BC’s shares of two yet more remote, less-known formations add up to yet another estimated 410 Tcf: 210 Tcf in the Liard deposit and 200 Tcf in the Cordova.

Although the annual number of wells drilled in the province has fallen to about 400 from a peak of more than 1,300 during the 2005-2007 years of high gas prices, shale exploration and field trials of horizontal drilling and hydraulic fracturing under northern conditions continue.

The activity primarily involves companies participating in a growing lineup of liquefied natural gas (LNG) terminal projects proposed for the Pacific coast of BC.

Of 13 Canadian overseas tanker cargo schemes that have matured enough to seek NEB export licenses, 10 have BC locations, two have Oregon sites and one is on the Atlantic coast of Nova Scotia. All the BC terminal projects and the Oregon proposals rely on future development of northern shale production.

BC’s growing importance to the overall Canadian natural gas landscape is also evident in historical production figures. Since 2000, marketed natural gas production in the province has grown at a trend-line rate of 3.4% per year, versus a 3.1% annual decline for the rest of Canada over that time period. That has more than doubled BC’s overall share of Canadian marketed natural gas production, from 12.2% in 2000 to an estimated 27.0% in 2013. Much of the increase has taken place since 2009, no doubt fueled by increased activity in the Montney and Horn River Basin.