Rapid natural gas development has created a growing backlog of depleted wells in need of safety and environmental cleanups in northern British Columbia (BC), according to provincial Auditor General Carol Bellringer. 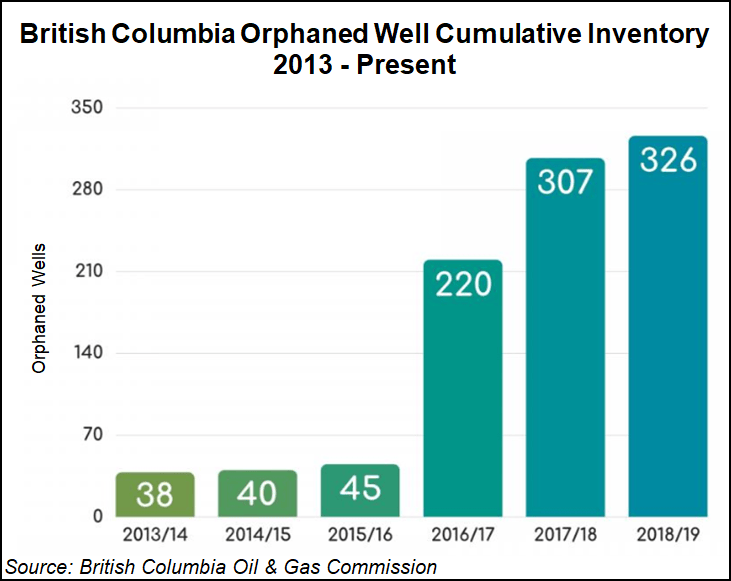 The number of inactive BC wells that have run dry nearly doubled to 7,474 from 3,800 since 2007. Orphan well sites, which become government liabilities because owner firms file bankruptcy or otherwise abandon the wells, jumped to 326 from 45 in just the past four years.

A provincial orphan well program, run by the BC Oil and Gas Commission (BCOGC), is C$19.7 million ($14.8 million) short of its C$33-million ($24.8 million) current cleanup cost forecast, the report to the legislature calculated.

No immediately threatening gas or fluid leak cases were identified. But the industry review by the BC auditor general’s office echoed warnings by northern communities and native tribes that inactive and orphan wells create safety and contamination risks.

Provincial legislation enacted in mid-2018 empowered the BCOGC to catch up with the cleanup backlog, and the commission is currently writing detailed regulations that will put its new authority into action, Bellringer noted in the report..

The stricter new regime would enable the BCOGC to require cleanups of aging inactive wells as a matter of industry routine, rather than use emergency order powers that rely on safety inspections to uncover evidence that responses are urgently needed.

The commission is already using its enhanced authority under the new legislation to cover rising orphan well cleanup expenses with an industry levy. The program ran into the financial red because the levy rate formerly had to be enacted by the legislature.

The BCOGC increased the levy last October, as a preliminary to an overhaul this spring. Beginning April 1, “a new liability levy will be based on forecast annual site restoration costs for all orphan sites in the province, replacing the previous tax that was a set cost per cubic metre of marketable oil or gas product,” the auditor-general said.

Provincial power to enforce the “polluter-pay” principle on the fossil fuel industry and bankruptcy trustees was further strengthened by a January decision of the Supreme Court of Canada. The ruling upheld a similar orphan well cleanup program in Alberta.

The BC gas-field cleanup backlog is an emerging version of a much larger problem sites inventory in the older and bigger Alberta industry, where the current counts are nearly 90,000 inactive wells and 3,127 orphans.