After taking a tiny first step into using renewable natural gas (RNG), British Columbia (BC) has a chance to reach an ambitious goal set by provincial government environmental policy, according to Canadian regulators. 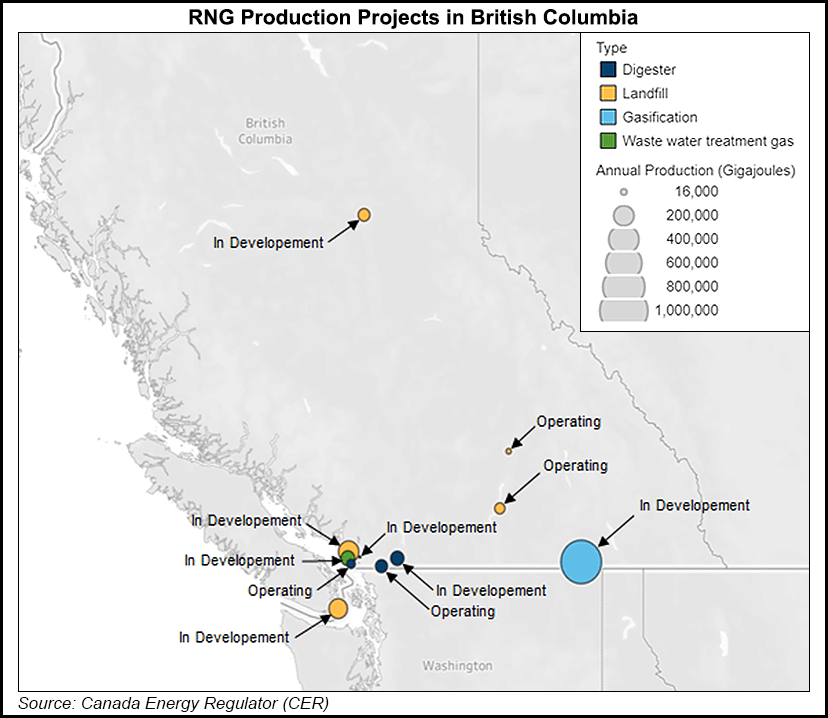 Supplies of RNG have gradually grown in the United States and they are inching higher in Canada. Initially, BC had around 0.2% RNG, the Canada Energy Regulator (CER) said. The provincial CleanBC program has called for swift acceleration into a 75-fold jump to 15% over the next decade.

“This will require a significant increase in production, but according to previous technical estimates, a 15% blending rate is within BC’s potential production capacity.”

The CER cited a landmark study done by the Alberta Innovates (formerly the Alberta Research Council) and the Canadian Gas Association on potential production of methane from Canadian wastes.

The expert assessment calculated that national mountains of accumulating scrap, from farm manure to wood chips and urban sewage, could yield more than enough RNG to satisfy all residential and commercial gas demand.

In BC, scavenging the officially green version of the fossil fuel from waste has created a natural gas counterpart to premium gasoline, CER noted.

Evolving technology strips out hazardous particles, hydrogen sulfide, moisture and carbon dioxide. It also strips out halogenated hydrocarbons, such as chlorine and fluorine, and complex siloxane compounds of silicon and oxygen.

Consumers do not need new hardware.

“Once produced, RNG can be injected into existing gas networks for immediate distribution by utilities,” said the CER. “Residential, industrial, and commercial end users can use this fuel without retrofitting their appliances because the methane content in RNG allows the fuel to be used interchangeably with traditional natural gas units.”Quebec also has seen green shoots in growing the RNG business. In June, Montreal-based Xebec Adsorption Inc. said it had two letters of intent to sell RNG installations with the potential to become firm orders for construction in 2021 from utility and waste management companies.