The Bowland-Hodder Shale of northern England has between 822 and 2,281 Tcf of natural gas in place, according to a new study that is the first to integrate all existing seismic data, geological analyses and well samples from the shale, the British Geological Survey (BGS) said Thursday. The assessment is higher than earlier estimates. 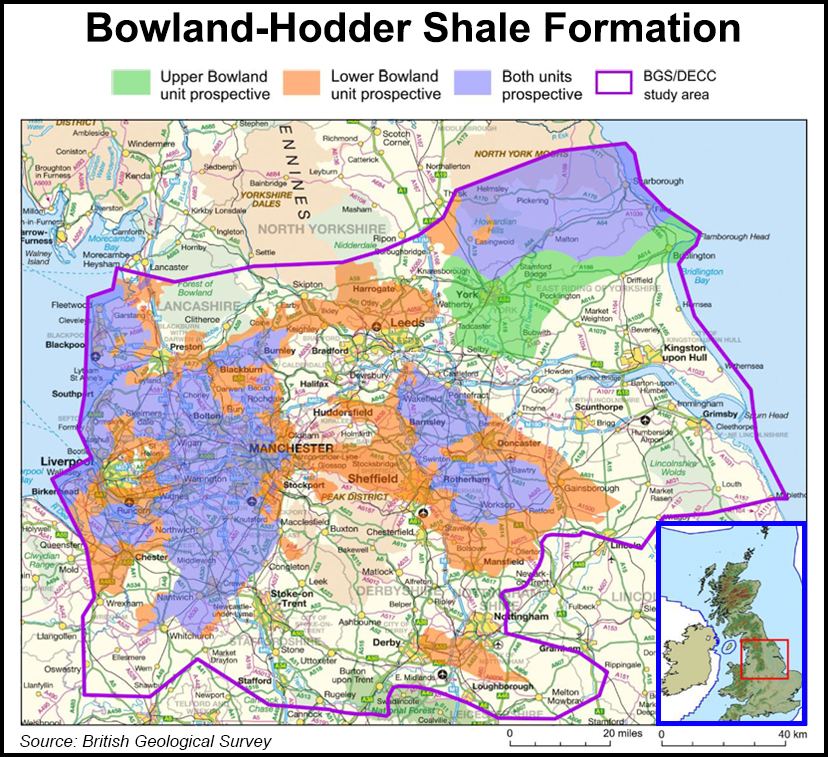 The range of the estimate is intended to reflect geological uncertainty; the central estimate for the resource in place is 1,329 Tcf. How much of this gas could eventually be extracted is unknown and depends upon economics, geology and other factors, BGS said. Previous estimates of gas recoverable in all of Britain have been around 5.3 Tcf based on an estimate of gas in place of around 53 Tcf.

“The study provides the first regional maps and cross-sections to show the extent of the upper and lower shale gas plays together with the estimated thickness of gas-mature shale,” BGS said. “This will provide investors, operators and regulators with an indication of where to target future exploratory drilling, which will be required to determine the extent of the commercially recoverable gas.”

More than 15,000 miles of seismic data were integrated with BGS outcrop and fault mapping, well data, historical and newly-commissioned laboratory studies to identify the potential volumes of shale gas in the Bowland-Hodder formation. The report also summarizes the methodology used in calculating the gas-in-place assessment.

“The maturity of the Bowland-Hodder shales is a function of burial depth, heat flow and time, but subsequent uplift complicates this analysis,” the report said. “Where they have been buried to sufficient depth for the organic material to generate gas, the Bowland-Hodder shales have the potential to form a shale gas resource analogous to the producing shale gas provinces of North America (e.g., Barnett Shale, Marcellus Shale). Where the shales have been less-deeply buried, there is potential for a shale oil resource (but, as yet, there is inadequate geotechnical data to estimate the amount of oil in-place).”

Energy retailer Centrica recently agreed to pay US$63 million to acquire a one-quarter stake in a Bowland license held by Cuadrilla Resources Ltd. and Australian engineering firm A.J. Lucas. It also committed $94 million for exploration and appraisal costs, which may be doubled if test drilling proves successful. The deal implies a payment of US$1,800-3,000/acre, depending on whether the project proceeds (see Shale Daily, June 14).

“The UK is in a good position to begin exploration for shale gas,” said Shale Gas Europe spokesperson Monica Cristina on Thursday. “There is adequate existing regulation at UK and European level. It is important to do initial exploration to determine size and commercial viability of UK shale gas resources. It is during that phase that industry can demonstrate on the ground that shale gas can be produced in a safe and environmentally sound manner.”