Brigham Minerals Inc., a company with a long lineage of successful Lower 48 operators, is planning to launch an initial public offering (IPO) to raise up to $100 million. 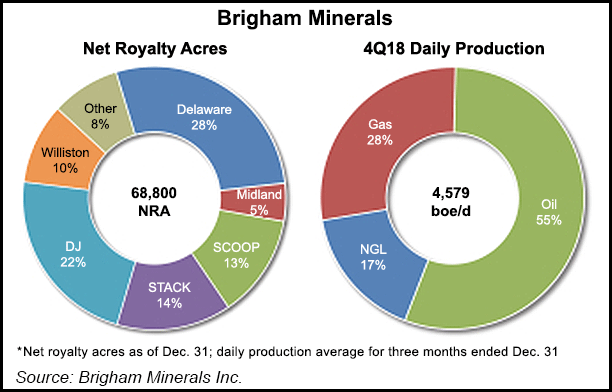 The company has an existing portfolio of about 40,000 net acres and an estimated 11,648 undeveloped horizontal drilling locations, with mineral and royalty stakes in the Anadarko, Denver-Julesburg, Permian and Williston basins.

Formed in 2012, Brigham was designed to acquire and actively manage mineral and royalty interests “in the core of what we view as the most active, highly economic, liquids-rich resource basins across the continental United States,” a filing with the Securities and Exchange Commission (SEC) stated.

Unlike exploration and production companies, mineral interests operators are typically granted ownership of the oil, natural gas and natural gas liquids (NGL) under tract of lands and the right to lease development rights to a third party. When rights are leased, usually for a three-year primary term, the companies usually receive upfront cash payments, aka lease bonuses, and they retain mineral royalties, which entitles them to percentages of production or revenue.

In addition to mineral interests, which represented 97% of Brigham Minerals’ net royalty acres at the end of 2018, the company also owns nonparticipating and overriding royalty interests.

The Austin, TX-based company intends to trade on the New York Stock Exchange under “MNRL,” according to the preliminary filing. No timeline was provided.

Through the end of 2018, management said it had completed 1,292 transactions with third-party mineral and royalty interest owners.

About 70% of volumes in 2018 were oil and NGLs, which represented 88% of mineral and royalty revenue for the period.

“We expect to see future organic growth in our production, revenue and free cash flow from 806 drilled but uncompleted horizontal wells across our interests and approximately 685 horizontal drilling permits” as of Dec. 31, “all of which are expected to occur without additional capital expenditure outlays.”

Ben M. “Bud” Brigham, founder and executive chairman, founded Brigham Exploration Co. in 1990 and sold it in 2011 to a predecessor company of Norway’s Equinor ASA for $4.5 billion. Subsequently, he founded Permian Basin-focused Brigham Resources and sold it for $2.44 billion in February 2017 to Diamondback Energy Inc. Two years ago he also founded Atlas Sand Co. LLC, which provides proppant for completion activities in the Permian.

Meanwhile, BJ Services, which provides fracturing and pressure pumping services, has withdrawn its IPO, which was filed about two years, according to Renaissance Capital, which tracks IPOs.

Baker Hughes, a GE company, has a minority investment in BJ, considered one of the largest completion specialists in the country. The company has not updated the preliminary prospectus since July 2017.