The U.S. Energy Information Administration (EIA) is proposing changes to its Monthly Crude Oil and Lease Condensate, and Natural Gas Production Report, including publishing separate estimates for Alabama, Federal Offshore Pacific, Michigan, Mississippi and Virginia. Data from those states/area would no longer be included in the “Other States” category, EIA said in a notice published on Oct. 2 in the Federal Register. EIA would publish data for a total of 21 states/areas and “Other States,” which would include 14 states. EIA is seeking public comment on the proposed changes through Nov. 1. Comments should be sent to DOE Desk Officer, Office of Information and Regulatory Affairs, Office of Management and Budget, New Executive Office Bldg., Room 10102, 735 17th St. NW, Washington, DC, 20503, or by e-mail to Chad_S_Whiteman@omb.eop.gov.

Activist groups once again are calling for more information about natural gas wells plugged and abandoned near Pavillion, WY, where drinking water previously was alleged to have been contaminated by drilling. Wyoming officials concluded in late 2016 that gas drilling activity did not contaminate any water wells. In a letter sent to the Bureau of Land Management (BLM), the Pavillion Area Concerned Citizens and Powder River Basin Resource Center requested information about the issue. BLM “has received the letter…and will respond appropriately in the near future,” said a spokesperson. “To date, the BLM has fulfilled its inspection and enforcement requirements” while working with field owner Encana Corp. “to plug wells in the Pavillion oil and gas field. This is a responsibility the BLM takes seriously and will continue to coordinate with the proper agencies and tribes to address concerns in the Pavillion area.”

California Gov. Jerry Brown recently signed a measure (SB 801) directing the Los Angeles Department of Water and Power (LADWP), the nation’s largest municipal utility, to de-emphasize gas-fired power generation and increase reliance on renewables. Under SB 801, LADWP is required by next June to fashion a plan for up to 100 MW of “cost-effective distributed energy storage solutions” for deployment later in 2018. The law also sets penalties to at least the cost of reducing climate impacts from the greenhouse gas volumes emitted in gas storage leaks.

NRG Energy Inc. filed a motion with the California Energy Commission (CEC) to suspend its $300 million project application to replace two of three natural gas-fired generation units at the Mandalay Generating Station in Oxnard, CA. The application came after the CEC siting review committee recommended rejecting the 262 MW project. NRG said it may consider withdrawing plans to replace its Ormand Beach (1,516 MW) and Mandalay Bay (560 MW) gas-fired, seawater-cooled baseload generation plants by the end of 2020 as mandated by the state water regulatory board.

Clean Energy Fuels Corp. andConsolidated Edison are building a compressed natural gas (CNG) station in the Hunts Point section of the Bronx to fuel multi-fleets for the New York City Department of Transportation’s Department of Sanitation (DSNY). DSNY operates CNG-fueled collection trucks and street sweepers. Baldor Specialty Foods also has committed to using the facility when it begins operations in 2018.

FERC has vacated in part its authorization for Bobcat Gas Storage to expand its natural gas storage facilities in St. Landry Parish, LA, at the company’s request. In 2009 the Federal Energy Regulatory Commission authorized Bobcat to build three additional storage caverns, increasing total capacity by 31.5 Bcf to 51.9 Bcf. The proposed three caverns would have a combined working capacity of 24 Bcf [CP09-19]. Earlier this year, Bobcat filed a motion to vacate the orders in part, saying it had no plans to construct and operate Cavern No. 3, and a 2.7-mile long 16-inch diameter pipeline and a 7.8-mile long 20-inch pipeline associated with the cavern. 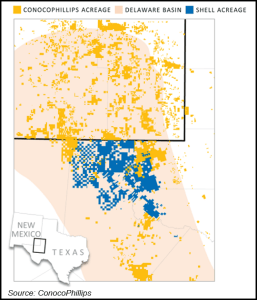 The decision to plunk down $9.5 billion to purchase Royal Dutch Shell plc’s Permian Basin assets is going to give ConocoPhillips a bountiful and low-cost supply that will be necessary as the world evolves toward a low-carbon future, CEO Ryan Lance said.  The mega deal announced late Monday is for Shell’s West Texas portfolio within…