With subfreezing temperatures on the way, natural gas forward prices strengthened during the trading period from Nov. 3 to 8, according to NGI’s Forward Look. 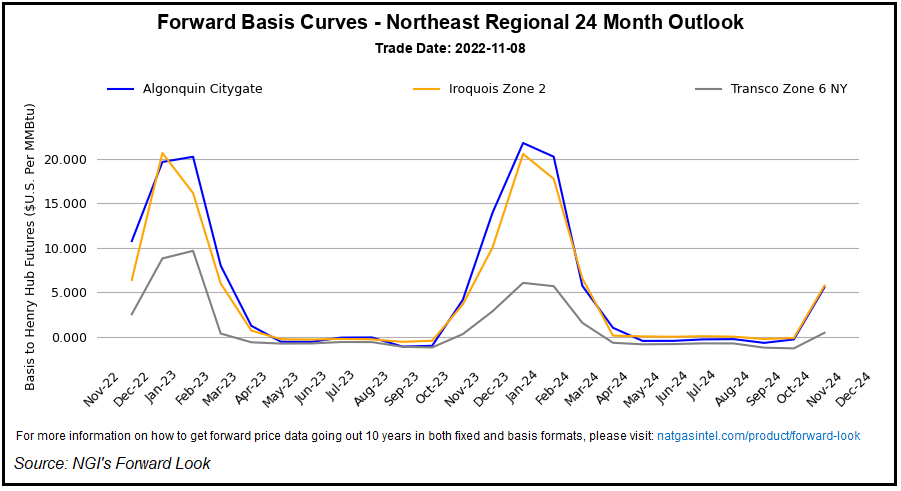 Price swings were relatively modest at the front of the forward curve when compared with recent weeks, likely because the drop in temperatures is expected to be short lived. The majority of U.S. locations posted fixed natural gas price increases of less than a quarter, while New England markets posted substantial decreases. Notably, though, December fixed prices in the region are more than $10.00 above benchmark Henry Hub.

At the Algonquin Citygate, December natural gas forward prices tumbled 84.0 cents from Nov. 3 to 8 to reach $16.881, Forward Look data showed. This represents a $10.743 premium over Henry Hub. That spread was even wider for the January contract, with Algonquin sitting at $26.142 and Henry Hub at $6.529.

Further out the curve, stout premiums were seen throughout the balance of winter (December-March). The four-month strip managed to slip $1.00 through the trading period but still averaged a hefty $20.747. Summer 2023 (April-October) prices held steady at $4.540.

Elsewhere in the Northeast, Iroquois Waddington posted similarly high prices across the winter strip, even as they fell week/week, Forward Look data showed. December stood Tuesday at $12.529 and January at $27.142. The balance of winter averaged $18.391, while the summer strip averaged only $4.640.

Though current weather models show mild temperatures remaining in place for a few more days across most of the Lower 48, the Northeast is one of a couple of regions that is in store for chilly weather. NatGasWeather said a glancing cool shot would drop high temperatures into the 50s for the next few days.

New England, in particular, faces uncertainty in the event of significant, prolonged cold this winter. Despite its proximity to prolific Appalachia Basin gas supplies, a lack of sufficient pipeline infrastructure has opened up the region to extreme volatility and sharply higher prices. This normally occurs in the winter, but prices have spiked sharply in the summers as well.

In addition to piped gas, New England has to rely on imported LNG to meet its wintertime needs. Against that backdrop, the region is at risk of having to price itself high enough to attract liquefied natural gas cargoes in the event of a colder-than-normal winter.

Oil also factors into the equation, but distillate fuel oil (DFO) stocks have dwindled to historic lows following last winter. Should the region experience yet another cold snap, further reliance on the fuel may require in-season replenishments to keep up with last winter’s total utilization of 637 GWh, according to BTU Analytics LLC.

“At current levels, DFO generation can be maintained for a few days,” said BTU analyst Eric Hinojosa. “Furthermore, without sufficient replenishments during the winter, or accelerated depletions due to lack of LNG imports, oil generation’s ability to balance the market is at risk.”

What Do The Weather Maps Say?

As for the rest of the country, NatGasWeather said a huge swing in temperatures is expected by the weekend as frosty air over Western Canada releases and spreads across the northern half of the United States. Overnight lows are expected to plunge more than 10 degrees below zero in some areas, while others hold near the freezing mark.

Subfreezing air also is expected to advance aggressively into the southern states, sending lows into the 20s and 30s over Texas and the South. This should be a boon to national demand through next week, with the latest weather data trending slightly colder.

Beyond next week, the weather data points to the bitter air retreating into Canada by Nov. 20 and remaining there for the next five days at least. NatGasWeather said this should result in a return to seasonal demand, although the overnight data was slower to erode cold and where a few additional heating degree days were added.

“However, much of the longer range data for the last week of November into early December isn’t as cold as needed to intimidate,” NatGasWeather said. However, there is some risk of colder trends in time because of the frigid air becoming anchored over much of Canada going forward, according to the forecaster.

Freeport And Other Burning Questions

The return of Freeport LNG also has dominated headlines this week as rumblings of a delayed restart circulate throughout the market. Last week, Freeport reiterated comments that it plans to restart operations at the export facility this month. However, federal regulators have indicated that the facility has yet to file the required paperwork to do so.

Freeport has been offline since early June following an explosion.

“If the facility were to surprise the market and restart tomorrow, prices could jump $1-2/MMBtu,” said EBW Analytics Group LLC’s Eli Rubin, natural gas analyst. “The distribution of potential risks, however, leans bearish: If Freeport does not restart by a rapidly approaching December, the odds plummet for a sufficiently cold winter to spark storage fears in the market.”

EBW noted that independent weather forecaster DTN is calling for a cold December. However, that alone is not enough to induce winter shortage risks, a key catalyst for higher prices. “Instead, it would require extended, durable cold to drive prices sustainably higher,” Rubin said.

That’s largely because mild weather this fall has led to a string of well above-average storage injections that have all but wiped out fears of a crunch this winter. As of Oct. 28, total working gas in storage stood at 3,501 Bcf, according to the Energy Information Administration (EIA). This is 101 Bcf below year-earlier levels and 135 Bcf below the five-year average, a vast improvement from the 300 Bcf-plus deficit seen this summer.

What’s more, estimates ahead of Thursday’s EIA inventory report point to yet another much larger-than-normal increase in stocks. Reuters polled 15 analysts, whose estimates ranged from injections of 75 Bcf to 101 Bcf, with a median forecast of 83 Bcf. A Bloomberg survey had a wider range of projections that included a low-end injection of 66 Bcf. It too produced a median build of 83 Bcf. NGI pegged the storage increase at 68 Bcf.

For comparison, the EIA recorded a 15 Bcf injection for the similar week last year, while the five-year average build is 20 Bcf.

Other external bullish catalysts also could boost prices, though.

Rubin pointed out that there is growing anticipation in the gas market of a railroad strike. This potentially could imperil coal deliveries and vastly increase the call on natural gas-fired generation to keep the lights on.

The threat of a railroad shutdown briefly sent prices spiking above $9.00 in September, and Rubin pointed out that the dispute was not resolved. Rather, it was postponed until after the midterm election.

Rubin noted that all 12 railroad unions separately need to approve the deal to avoid a strike. Seven have approved deals. Two have rejected union contracts, and must find a way forward over the next 10 days if a strike is to be averted.

“In our view, the overwhelming pressure to reach a negotiated settlement ahead of the holiday season is likely to contain any strike, should one even occur, to only a few days,” Rubin said. “Still, renewed price volatility may be likely until an agreement is secured across all 12 rail worker unions.”