For all the intraweek volatility in the natural gas forward markets, prices ultimately capped the Nov. 5-11 period moderately higher as chilly weather crept back into the long-range forecast, according to NGI’s Forward Look. Though the colder weather may not last, Appalachia markets rallied sharply as the expected drop in temperatures coincided with gas flow restrictions in the region because of pipeline maintenance and a drop in production. 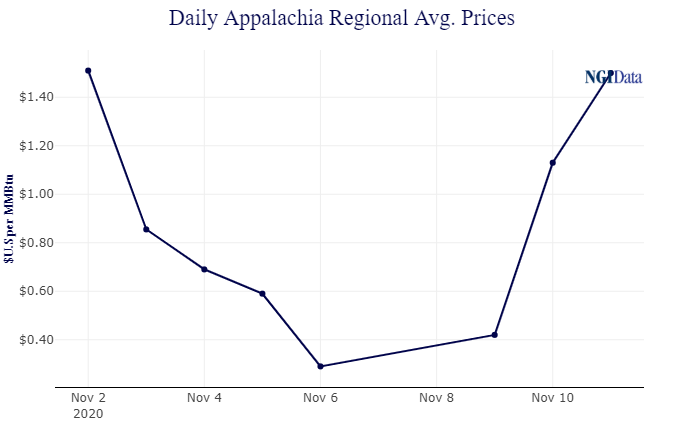 The Nymex December futures contract settled Wednesday at $3.031. January climbed to $3.151, while the balance of winter (December-March) hit $3.081.

Nevertheless, weather remains a formidable challenge for gas bulls. Very warm anomalies for the first three full storage weeks in November suggest an “astounding” 92 gas-heating degree days (GHDD) and 161 Bcf of below-normal demand, according to EBW Analytics Group. What’s worse is that the warming in the forecast has occurred just as producers restarted shut-in production in Appalachia, heightening the bearish impact on the spot market. On Friday (Nov. 6), prices in the region reached record lows, with NGI’s Appalachia Regional Avg. plunging to only 29.0 cents. (That’s the fixed price, not basis.)

“This suggests the core supply/demand balance is running 5.7 Bcf/d tighter than normal,” the firm said. “If weather turns from a bearish dampening effect to a bullish accelerant at any point over the next 30-45 days, a bullish stampede could quickly carry Nymex futures 30-50 cents higher.”

Bespoke Weather Services said the morning weather model runs move in the colder direction, with most of the changes coming next week. This is because of a brief spike in upper-level ridging around Alaska injecting more cold into the pattern for a few days.

The European model “made noise” Wednesday afternoon, hinting that the changes could be a sign of a more material shift in pattern. However, it backed away from that idea somewhat overnight, according to the forecaster.

“Our lean continues to be that this round of colder changes, while significant, is just a window of variability mixed into the warm base state,” Bespoke said. “We see another warm-up versus normal at the end of the month into early December. Confidence is a little lower for now, however.”

In another blow, NatGasWeather said the midday Global Forecast System weather model on Thursday lost 6 heating degree days (HDD) in demand for next week by not seeing quite as much chilly air across the Midwest and Northeast. There are still modest surges in national demand late this week and again next Tuesday and Wednesday, but the days before and after remain too warm.

The supply side has seen its fair share of volatility this week. Tuesday’s top-day estimates showed a 2 Bcf day/day decline in Lower 48 output, with about half of that coming out of the Northeast. Some of the production returned Wednesday, but Northeast supply was seen holding out until more convincing cold arrives in the region in the next few days.

How the changes in supply and demand impact storage is unclear. Market observers don’t seem to have a firm grasp on how much gas has been injected or withdrawn from storage inventories in recent weeks. Last Thursday, the Energy Information Administration (EIA)’s 36 Bcf pull came in well above expectations, the latest in a string of reports to do so.

This week, the EIA’s weekly storage inventory report is scheduled for release on Friday in observance of Veterans Day. Ahead of the report, analysts expectations ranged widely from a draw of 12 Bcf to an injection of 10 Bcf.

Mobius Risk Group said the wide range of expectations and steep decline from the prior week’s 36 Bcf withdrawal are part of the reason behind the price collapse that, as of the past two days, appears to have abated. The Nymex December futures contract gained 17 cents on Tuesday and Wednesday alone, while January climbed about 15 cents over the two-day period.

Mobius said it is important to note that while total degree days did not precipitously fall between the last week of October and the first week of November, the manner in which the degree days were amassed was starkly different.

“Where temperature gradients fall nationally can have a great deal to do with late fall early winter results versus expectations,” said the Houston-based firm. “A result anywhere inside of the aforementioned range would confirm a continuation of weather-adjusted tightness observed over the past couple of months.”

By Thanksgiving, traders may place more value on predictions for December weather, according to Mobius, and with a high probability of neutral to bullish year/year HDD accumulation, the aforementioned underlying weather adjusted tightness would be more critical.

If warmer-than-normal temps do persist through November, and bleed over into December, there is a “noteworthy risk” Mobius should be considered.

“Of course the most obvious one is the impact of reduced residential and commercial demand, but a secondary risk could arise if speculative traders holding long positions are forced to quickly exit trades or reduce exposure in a rapidly falling market,” the firm said. “This latter factor should not at all be mistaken for a change in the fundamental outlook should it arise.”

Given the uncertainty over how Friday’s storage data would take shape, and the warmer turn in the latest weather model run, December Nymex futures settled Thursday at $2.976, off 5.5 cents day/day. January fell 5.7 cents to $3.094.

While the majority of U.S. forward markets posted gains that were similar to the moderate rise in futures prices across the curve, Appalachia stood away from the pack.

With production falling early in the week, and uncertainty over when all the volumes would return to the market, sharp double-digit gains extended across the region. The increases were most pronounced at the front of the forward curve, but the rally extended throughout the winter. Smaller gains were seen beginning in the summer 2021.

On the weather front, NatGasWeather said cold air over the West and Northern Plains was forecast to eject across the Midwest and Great Lakes the next few days. Temperatures were expected to plunge into the 20s and 30s overnight for a bump in demand.

After a mild break Sunday and Monday, however, a new weather system/cold shot was to sweep across the Midwest and Northeast beginning Tuesday. “These two systems trended colder compared to the start of the week,” NatGasWeather said.

Storage in the EIA’s East region was at 947 Bcf as of Oct. 30, its highest inventory level year to date and 15 Bcf, or 2%, above levels at this time in 2019. But with production being tempered a bit, big jumps were seen across Appalachia.

Meanwhile, Texas Eastern Transmission (Tetco) said as part of its ongoing Pipeline Integrity Program, further investigations are required on its 26-inch diameter line between the Somerset and Summerfield compressors in Ohio. As a result, Tetco declared a force majeure, reducing capacity through the Lebanon compressor station from a normal operating capacity of 551 MMcf/d to 125 MMcf/d effective Nov. 10’s timely cycle.

“This is 420 MMcf/d below the previous two-week average of 545 MMcf/d” and may add bearish pressure to Tetco M2 prices “as one of its export lines is constrained,” Genscape Inc. analyst Josh Garcia said.

There is currently no estimate for a return to service.

But if there’s no storage available, and no demand, “then there’s no home for production,” the analyst said. Now that cold is set to return starting Friday, demand and prices are recovering, “and therefore marginal production is recovering as well.”

Interestingly, the big upswing in Appalachia prices did not spill over into downstream Northeast markets. The often volatile Algonquin Citygate saw December prices fall 9.0 cents from Nov. 5-11 to reach $4.627, Forward Look data showed. The balance of winter fell 13.0 cents to $5.260, but the summer 2021 strip did pick up 4.0 cents to hit $2.600.