Brent crude oil prices are set to average $65/bbl during the second quarter before declining to $61 for the second half of 2021, the Energy Information Administration (EIA) said in the May edition of its Short-Term Energy Outlook (STEO). 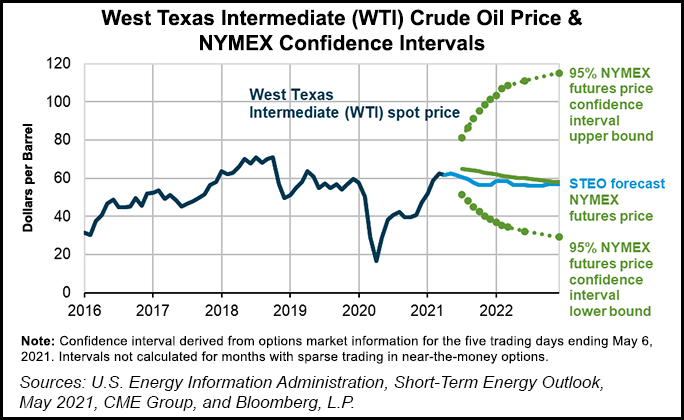 In the report, published Tuesday, EIA said Brent prices averaged $65 in April, unchanged from March. This comes as the market has “considered diverging trends in global Covid-19 cases,” researchers wrote.

After sliding to $61 for the second half of this year, Brent prices are set to remain at $61 in 2022, according to EIA’s latest forecast.

“Because the average price of West Texas Intermediate crude oil remains above $55/bbl in our forecast, we expect producers will drill and complete enough wells in the coming months to offset declines at existing wells,” EIA said.

Also contributing to rising production will be new projects in the Gulf of Mexico, researchers said. EIA expects U.S. crude production to average 11.3 million b/d in 4Q2021 before climbing to 11.8 million b/d in 2022.

Gasoline consumption domestically is set to average close to 9.0 million b/d this summer (April to September), 1.2 million b/d higher than a year ago but still nearly 0.6 million b/d shy of 2019 levels, according to EIA.

The agency cautioned that its projections were formulated prior to the cyberattack that shuttered the Colonial Pipeline, with any effects of that outage not accounted for in the May STEO.

On the strength of exports and domestic consumption, natural gas spot prices at Henry Hub are expected to average $2.78/MMBtu in the second quarter and $3.05 for 2021 overall, EIA said.

The updated projections represent a modest increase in EIA’s 2021 natural gas price forecast. Last month, EIA predicted an average Henry Hub price of $2.73 for the second quarter and $3.04 for the full year.

“In 2022, we expect the Henry Hub price will fall to an average $3.02 amid slowing growth in LNG exports and rising production,” researchers said.

The U.S. exported an all-time high 10.5 Bcf/d of LNG in March, with exports averaging 9.2 Bcf/d in April. That marks the highest volume of LNG exported for those months since Lower 48 exports began in 2016, EIA said.

EIA said it expects U.S. LNG exports to average 8.6 Bcf/d in May before ramping to above 9.0 Bcf/d for the summer to meet peak demand in Asia and Europe.

U.S. natural gas consumption is set to average 82.6 Bcf/d in 2021, a 0.7% year/year decrease. EIA said this is a factor of higher prices prompting gas-to-coal switching in the power sector. Residential/commercial demand is expected to increase 1.0 Bcf/d this year versus 2020 levels, with industrial consumption on track to rise 0.8 Bcf/d year/year.

“Rising consumption outside of the power sector results from expanding economic activity and colder temperatures in 2021 compared with 2020,” EIA said. “We expect U.S. natural gas consumption will average 82.5 Bcf/d in 2022.”

Lower 48 natural gas storage ended April at an estimated 2.0 Tcf, 3% below the prior five-year average, according to the agency. Stockpiles are on track to exit the 2021 injection season at over 3.6 Tcf, continuing to lag five-year norms by 3%, EIA said.

Domestic dry natural gas production is on pace to average 91.1 Bcf/d for 2021, down 0.3% year/year. Production dipped to 86.3 Bcf/d in February amid weather-related disruptions before rebounding to an estimated 91.3 Bcf/d in March, according to EIA.

“We expect relatively flat dry natural gas production in May ahead of production beginning to rise in mid-2021,” EIA said.

Production is forecast to climb to 92.0 Bcf/d in 4Q2021 before averaging 93.1 Bcf/d in 2022, with the higher output a result of stronger natural gas and crude oil prices versus 2020, researchers said.