BreitBurn Energy Partners LP is adding to its Permian Basin portfolio after agreeing to pay about $860 million for stakes in Whiting Petroleum Corp.’s Postle and North East Hardesty oilfields in Oklahoma. 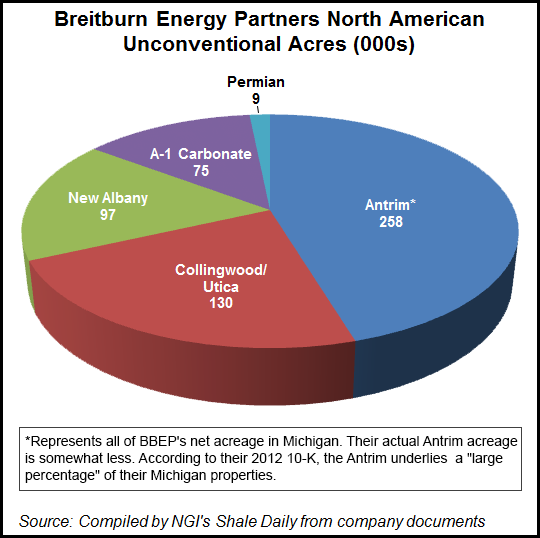 Postle and Hardesty, both enhanced oil recovery projects in Texas County, OK, were producing about 7,400 boe/d net at the end of April, 87% weighted to oil and 11% to natural gas liquids (NGL).

BreitBurn also is paying $30.2 million to some undisclosed sellers to gain a bigger stake in some of the acquired assets.

“These assets are an excellent fit for our portfolio, with significant recoverable oil in place and a long horizon of production visibility,” said BreitBurn CEO Hal Washburn. “We anticipate a decade or more of very low decline production from these assets, which balances some of our more development-focused acquisitions completed last year.”

The assets have an estimated reserve life of about 13 years based on estimated proved reserves of 35 million boe as of April 1. The differential for oil was estimated at around $8.00/bbl below West Texas Intermediate and lifting costs are about $18.00/boe.

By controlling the midstream assets, BreitBurn would be able to integrate CO2 compression, delivery and recycling management, as well as oil exports, via its pipeline system.

The acquisition “is complementary to our Permian Basin operations, and we expect that it will strengthen our technical and exploitation capabilities and broaden our intellectual capital with tertiary flood expertise that can potentially be applied to other BreitBurn properties.”

The purchase, expected to close by the end of July, should deliver $135-145 million of distributable cash flow in the second half of the year, BreitBurn noted. Whiting would continue to operate the assets post-closing through Oct. 31, which would allow BreitBurn the opportunity to transition and integrate its operations.

Whiting, whose big focus today is in the Bakken/Three Forks formation, estimated that the properties being sold comprised about 8.6% of its March production. Net proceeds are estimated at $850.6 million; the crude oil swaps would be conveyed at closing.

BreitBurn’s unconventional holdings include 258,000 acres in Michigan, including extensive acreage in the Antrim Shale, and 130,000 acres in the Collingwood/Utica.

Postle, one of the Oklahoma Panhandle’s small but major fields, was discovered in 1958 and first developed by Mobil Oil Corp. in the early 1960s, then unitized for waterflooding in 1967. Whiting purchased the field from Celero Energy LP in 2005 for $343 million as part of a large CO2 enhanced oil recovery project expansion.

Wells Fargo Securities’ David Tameron said the timing of the sale might surprise the Street, because recent discussions with Whiting management had put the divestiture a bit further off. BreitBurn is paying about $116.00 boe/d for current production and $25.00/boe for reserves, by Tameron’s estimates.