Suffering from a “serious health setback,” Kevin McIntyre has stepped down as FERC chairman but will remain a commissioner, and the White House late Wednesday announced that President Trump has designated Commissioner Neil Chatterjee to once again lead the Commission. 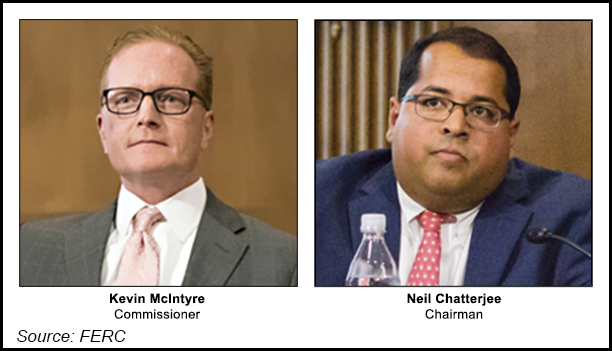 Earlier this year, McIntyre revealed that he had been diagnosed with a brain tumor in 2017 and had since undergone successful surgery. He also suffered a back injury in a gym accident in July. His recovery did not prevent him from fulfilling a full schedule, including hearings on Capitol Hill and speaking engagements, at least until September, when he was absent from the Federal Energy Regulatory Commission’s monthly public meeting. He also missed FERC’s October meeting.

“I have at all times endeavored to perform the extensive duties of Chairman — above and beyond those duties shared by all Commissioners — with full attention and vigor, despite facing some health challenges along the way, including compression fractures in multiple vertebrae this summer,” McIntyre said in a letter sent to the White House Oct. 22 and released by FERC late on Wednesday.

“However, I very recently experienced a more serious health setback, leaving me currently unable to perform the duties of chairman with the level of focus that the position demands and that FERC and the American people deserve. I therefore propose to step aside from the position of Chairman and its additional duties so that I can commit myself fully to my work as Commissioner, while undergoing the treatment necessary to address my health issues.”

Chatterjee, who served as acting chairman for four months prior to McIntyre’s Dec. 2017 swearing in at FERC, said Wednesday night that he was stepping into the chairmanship “with a heavy heart.”

“Although this is a difficult period for the Commission, I want to assure my fellow commissioners, staff within the building and stakeholders outside it, that it’s my full intention to build upon Kevin’s hard work. But above all, I look forward to the day when my friend is back at full capacity.”

Commissioners Cheryl LaFleur and Richard Glick voiced their support for both McIntyre and Chatterjee.

“This is a time for close cooperation among everyone at the Commission, and I will work as hard as I can to keep our work moving forward,” LaFleur said.

Sen. Lisa Murkowski (R-AK) also thanked McIntyre for his leadership at the agency and wished him a swift recovery.

“I’m confident that Chairman Chatterjee will once again effectively lead the agency, and I will work with my Senate colleagues to restore a full complement of commissioners as quickly as possible,” Murkowski said.

The moves leave unchanged the makeup of FERC at four commissioners, two Republicans â€“ McIntyre and Chatterjee — and two Democrats — LaFleur and Glick.

“We look forward to working with Neil Chatterjee as Chairman, a role where his experience will help steer the Commission forward smoothly and under sound leadership,” Wiggins said.

The incoming and outgoing chairmen have different backgrounds — with Chatterjee a former energy advisor to Senate Majority Leader Mitch McConnell (R-KY) and McIntyre an attorney who previously served as co-head of the Jones Day law firm’s global energy practice — and, presumably, different priorities.

“No doubt, their diverse backgrounds provide both with different approaches to FERC and energy policy,” said Katie Bays and Josh Price, analysts at Height Securities, in a note to clients Thursday. The biggest difference, they said, may be “their opinions on how and whether to support marginal coal and nuclear generators in competitive markets. These differences came to a head in late 2017, when the Department of Energy (DOE) sent FERC a notice of proposed rulemaking (NOPR) which outlined a plan to economically support merchant generators with 90 days of on-site fuel supply.

“Chatterjee’s initial response was to voice support for such a policy and highlight the grid resiliency benefits of coal and nuclear. However, FERC initially rejected the policy — opening a new docket to discuss grid resiliency in principle. Under Chatterjee’s leadership, that resiliency docket may be much more interesting.”

Earlier this month Trump nominated Republican Bernard McNamee, who is currently executive director of DOE’s Office of Policy and previously served as deputy general counsel for energy policy at DOE, to fill the remaining vacancy at FERC. His nomination was based at least in part on his support for DOE’s failed NOPR. He must still be confirmed by the Senate.