Earlier this month, when crude futures dropped more than $10/bbl seemingly overnight, it foreshadowed a sharp pullback in activity in the North American onshore; the updated Baker Hughes Co. (BKR) rig count Friday showed a retrenchment every bit as steep and sudden as the collapse in prices. 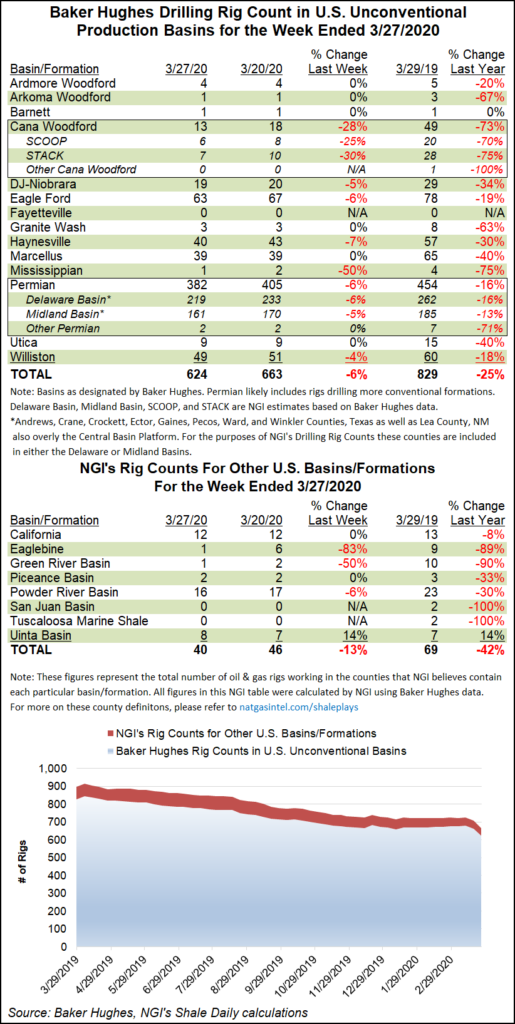 The United States sent 44 rigs packing during the week ended Friday, with the vast majority — 40 in total — oil-directed, according to BKR. Four natural gas-directed rigs also exited on the week, dropping the combined domestic tally to 728, down from 1,006 rigs active in the year-ago period.

Land drilling accounted for most of the declines, dropping by 41 rigs week/week. Two rigs exited from inland waters, along with one departing the Gulf of Mexico. Horizontal drilling fell by 43 rigs overall, with directional drilling down two. The number of vertical rigs saw a net increase of one.

The losses were equally steep for Canada, which also dropped 44 rigs from its total, 34 oil-directed and 10 gas-directed. That dropped the Canadian rig count to 54, down from 88 a year ago.

The combined North American rig count finished the week at 782, down more than 300 rigs from the 1,094 active at this time last year.

Among plays, the Permian Basin, by far the most active in the U.S. onshore, bore the brunt of the slowdown during the week. With 23 rigs exiting, the West Texas and southeastern New Mexico play finished with 382 rigs, down from 454 a year ago.

Also among plays, the Cana Woodford count dropped by five rigs, the Eagle Ford Shale dropped by four, the gassy Haynesville Shale dropped by three and the Williston Basin was down two. The Denver Julesburg-Niobrara and the Mississippian Lime dropped a rig a piece.

Looking at the state-by-state counts, Texas dropped 29 rigs from its total for the week, falling to 368 (491 a year ago). Four rigs exited in Oklahoma, while three rigs each departed from Louisiana and New Mexico. Colorado and North Dakota each dropped two rigs overall, while Alaska and Wyoming each dropped one. Utah saw a net increase of one rig for the week.

The sharp reduction in U.S. drilling activity during the week comports with the deluge of announcements from upstream operators slashing spending plans in response to the collapse in oil prices.

Earlier in the week, the Federal Reserve Bank of Dallas concluded that oil and natural gas activity in Texas, southern New Mexico and northern Louisiana fell off a cliff in the first three months of 2020.

On a more optimistic note, despite falling on hard times themselves, oil and gas industry players have stepped up to do their part to support relief efforts in the face of the coronavirus pandemic that has ensnared not just energy markets but the entire global economy.