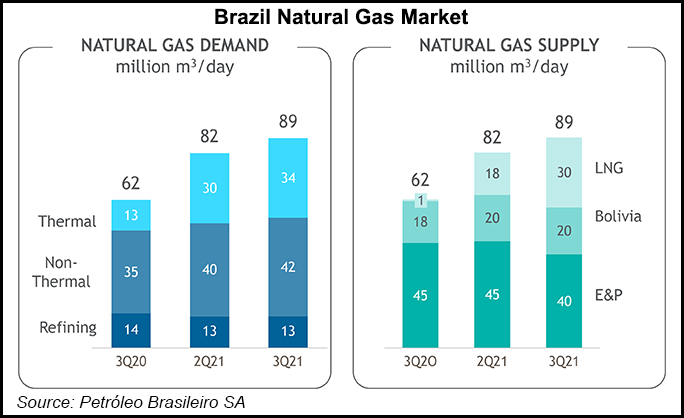 Petrobras relied on its production to meet 40 MMm3/d of demand, with liquefied natural gas (LNG) imports from the global market and pipeline imports making up the rest. Regasified LNG volumes averaged 30 MMm3/d, up almost two-thirds sequentially and 30-fold from a year earlier. Bolivia supplied 20 MMm3/d via pipeline.

The higher volume of LNG delivered to the market was made possible by an expansion of the regasification capacity at the Guanabara Bay import terminal to 30 MMm3/d from 20 MMm3/d, “offsetting the lower availability of domestic gas during the Mexilhão field scheduled shutdown in September,” the company said.

In addition to its role as an integrated oil and gas company, Petrobras also holds ownership stakes in a vast fleet of thermal and renewable power generation assets.

However, net income for the Petrobras gas and power unit fell to $3 million from $244 million. The decline reflected “the impact of the increase in LNG acquisition costs on the natural gas commercialization margin.” It came “in a period of both higher non-thermoelectric demand and high level of natural gas-fired power generation, as a consequence of worsening hydrological conditions,” management said.

For the remainder of the year, the company expects to see high natural gas demand “in our market because we see high demands in thermoelectric and industrial markets,” Petrobras’ Rodrigo Costa Lima e Silva, chief refining and natural gas officer, told analysts during a conference call to discuss the results.

On the environmental front, Petrobras is targeting “neutrality of greenhouse gas emissions from Scope 1 and 2 operations,” which are direct and indirect company emissions. It also plans to “influence the achievement of the same objective in nonoperated assets, within a period compatible with that established by” the 2015 United Nations global climate accord, aka the Paris Agreement.

At the end of October, Petrobras had signed asset sales transactions totaling $5.6 billion. The sales included  two refineries, a liquid fuels distributor, its 10% stake in the NTS natural gas pipeline network, and a 51% stake in natural gas distribution holding company Gaspetro. The divestments are part of a strategy to focus on ultra-deepwater E&P in the prolific pre-salt formation and refining assets in southeastern Brazil.

Net income for the quarter was $5.95 billion, versus a net loss of $257 billion in the year-ago period.