At his swearing-in ceremony, the new CEO of Brazil’s Petroleo Brasileiro SA (Petrobras), Roberto Castello Branco, said the state energy giant needs to divest assets in the natural gas sector and end its domination of the natural gas supply chain so as to increase the number of participants in the market. 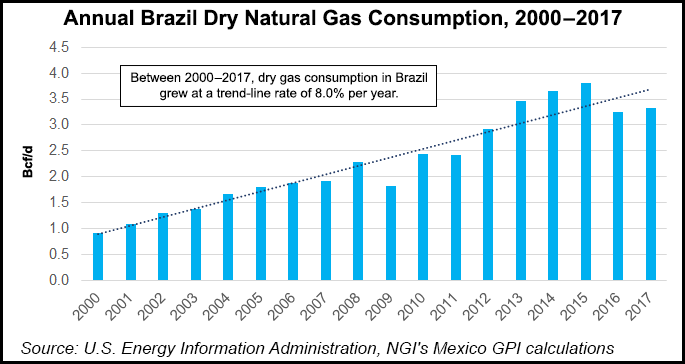 “We’re pro-market economists. We like competition,” he told reporters on Jan. 3.

Brazil’s new government, headed by right-winger Jair Bolsonaro, has made it clear it will continue to shed non-core assets at the state company.

As part of an ongoing divestment program, Petrobras plans to sell Transportadora Associada de Gas, or TAG, which operates a gas pipeline network in the north of Brazil. Petrobras has already sold off natural gas distributors as well as a 90% share in southeast pipeline operator Nova Transportadora do Sudeste, or NTS.

As part of ”Gas to Grow,’ in December outgoing Brazilian President Michel Temer signed a decree allowing for greater third-party access to gas pipelines and regasification terminals. The decree could also mean third-party access to the Bolivia-Brazil gas pipeline, or Gasbol. Brazil has a long-term natural gas import contract with Bolivia that expires later this year.

Natural gas production in Brazil continues to rise on the back of booming oil production in its offshore pre-salt basin, although not all of it reaches market and the country still needs to import gas via pipeline and liquified natural gas to meet domestic demand. In October, Brazilian production hit 117 million cubic meters/day (MMcm/d), or 4.13 Bcf/d, up 3.7% month/month and 2.1% year/year, according to hydrocarbons regulator AgÃªncia Nacional do PetrÃ³leo, GÃ¡s Natural e BiocombustÃ­veis (ANP). The country aims to double gas production by 2030.

In a recent report, the International Energy Agency (IEA) said that “with domestic supply and demand expected to grow in the coming decades, the prospects for the natural gas industry in Brazil are promising. However, the legal and regulatory frameworks will need to evolve to allow the country to reap the benefits of a competitive gas market.”

The agency recommends the “establishment of independent transmission system operators and the design and implementation of operational and technical rules based on regulatory policies.” In many ways, the process started in Brazil mimics the recently launched natural gas changes seen as part of the energy reform in Mexico.

Around 80% of Brazilian gas is extracted offshore, the IEA said, tying it to the rapid development of the pre-salt, one of the fastest growing oil patches globally. The ANP expects oil production in Brazil to double to 5.5 million b/d by 2027 on the back of offshore production. But pre-salt operators in Brazil have expressed concern that they can’t go ahead with associated gas programs because they don’t have access to pipelines and midstream infrastructure. Instead, natural gas is often reinjected or flared.

The Brazilian energy sector will require investment of about $480 billion by 2027, with the oil and gas industry making up $373 billion of this figure, the country’s new energy minister Bento Albuquerque said.