Brazil’s fuel of the future could be natural gas, but some challenges will have to be overcome if that is to be the case, according to consultancy Wood Mackenzie. While the potential for gas demand is “robust,” the supply side of the equation needs some work, and liquefied natural gas (LNG) imports will continue to be necessary in the years ahead. 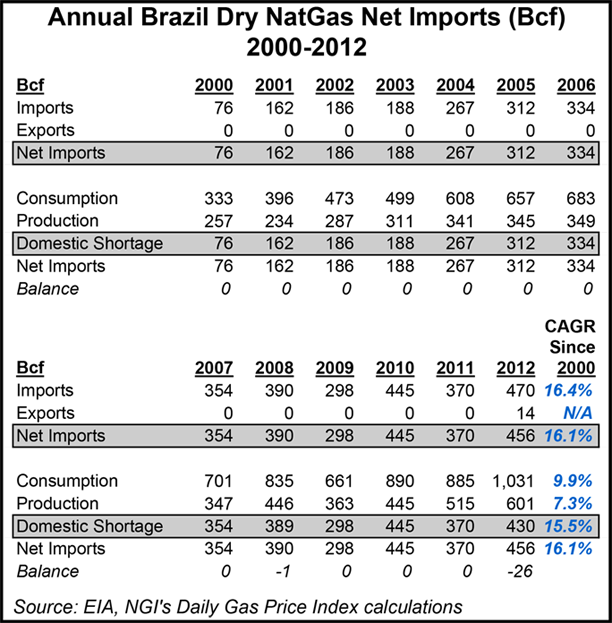 “Until recently, many had anticipated that associated gas supply from the Santos Basin pre-salt oil discoveries would reverse Brazil’s LNG position from importer to exporter,” the firm said in a new report. “However, oil development delays and rising gas demand have challenged that.”

So this year Brazil looks as if it will import nearly 4 million metric tons per annum (mmtpa) of LNG, which represents about 7% of all Atlantic Basin imports, Wood Mackenzie said.

Brazil’s reliance on hydropower, whose availability fluctuates according to rainfall, makes gas demand from backup gas-fired generation more volatile, the firm said. Because it can take 20 days or longer for spot cargoes of LNG to reach Brazil, sometimes a change in weather can improve hydro availability and make the LNG unnecessary before it arrives.

Brazil has also relied on imports of pipeline gas from Bolivia, about 24-32 million cubic meters per day. “However, reserve restrictions in combination with an expected uptick in Bolivian gas exports to Argentina from 2021 are likely to reduce future imports of Bolivian gas into Brazil from as early as 2016,” Wood Mackenzie said.

As for the Santos Basin, gas production from the play is secondary to oil, and much of the produced gas will be reinjected to enhance oil recovery, according to the firm. Optimal reinjection rates are expected to be around 50% depending upon the field.

Other plays will emerge, but the country’s hydrocarbon exploration “is still at an early stage” onshore and off.

Because of these factors affecting supply and the continued reliance on LNG imports, gas storage would be a valuable asset to complement LNG imports, Wood Mackenzie said. “Petrobras has explored gas storage potential for years to no avail,” the firm said, “so while players occasionally mention storage, a better understanding of the geology and various storage options in Brazil will be needed before the economics are proven.”

Brazil could still become an exporter of LNG, at least on a seasonal basis, Wood Mackenzie said. This would likely take the form of exports from a floating terminal accessing gas supplies from the pre-salt. “However, Brazil will likely continue year-round imports for some time, with overall volumes subject to the mix of production upside and domestic demand.”