Brazilian petrochemicals giant Braskem SA reported record imports of ethane from the United States to its Braskem Idesa polyethylene plant in Mexico for a second straight quarter in the fourth quarter of 2021, and it expects a new ethane import terminal at the site to start up by 2024. 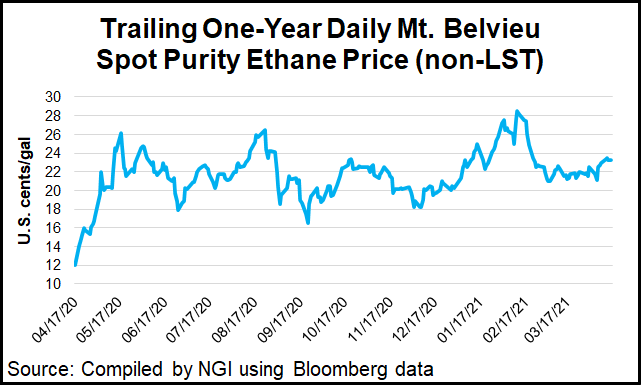 CFO Pedro Freitas described a dramatically improved operating environment in Mexico versus a year earlier during a conference call to discuss fourth-quarter and full-year 2021 results.

Braskem Idesa’s natural gas supply was briefly cut off in December 2020 amid pressure from state oil company Petróleos Mexicanos (Pemex) to renegotiate a take-or-pay ethane supply contract for the plant in Coatzacoalcos, Veracruz. Pemex had struggled to fulfill its 66,000 b/d supply commitment as its own natural gas production declined. The firms then amended the deal to reduce Pemex’s supply obligations to 30,000 b/d, as Braskem Idesa expanded ethane import capacity at the site through a project called Fast Track.

Braskem Idesa is a joint venture between Braskem and Mexican conglomerate Grupo Idesa.

Braskem reported a utilization rate of 81% at the Mexico plant in 4Q2021, up 13 percentage points from the previous quarter and 34 percentage points from 4Q2020. The sequential increase was “due to a quarterly record of ethane imports from the United States using the Fast Track solution,” along with higher ethane supply from Pemex, management said.

The year/year improvement “mainly reflects the impacts from the shutdown in December 2020 due to the interruption in natural gas supply.”

Through the Fast Track project, Braskem Idesa recorded average ethane imports of 20,900 b/d during 4Q, “which represents around 84% of Fast Track current capacity, besides the increase in ethane supply from Pemex, in line with the volumes established in the amendment to the ethane supply agreement.” Pemex, for its part, supplied 30,600 b/d of ethane during the quarter.

Braskem Idesa is in the process of expanding the Fast Track solution to reach a maximum import volume capacity of 35,000 b/d, with the project slated to finish in 3Q2022. By the end of 2022, Braskem Idesa could reach close to 100% of its feedstock needs between Pemex and Fast Track, provided that Pemex fulfills its obligations under the amended contract, Braskem said.

“The definitions regarding the project’s potential partner and its capital structure are under discussion,” management said. “The project is currently in the process of obtaining licenses, permits and engineering details, with construction expected to start in 2Q2022 and terminal operations to start up in 2024.”

Braskem Idesa also is in the process of selecting potential partners to develop the terminal, said Freitas. He said selection of a partner “is likely to take place within the next few months.” He added that “we’re seeing the Mexican government adopt a very positive stance in terms of supporting that investment.” He added that the project “may well be” the largest private sector investment underway in Mexico right now.

He added that the terminal aligns with the Mexican government’s Interoceanic Corridor initiative, which is designed to promote connectivity and industrial development across Mexico’s Tehuantepec Isthmus.

Polyethylene demand in the Mexican market rose 7% y/y during the fourth quarter, “explained by the normalization of demand and recovery of the Mexican economy,” Braskem said.