Braskem SA reported record-high ethane imports during the third quarter to its polyethylene complex in Coatzacoalcos, Mexico, and the figure is set to continue growing. 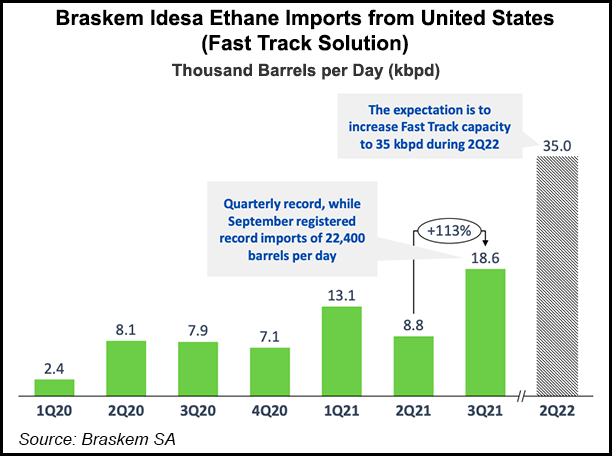 Ethane imports to the Braskem Idesa facility — among the largest petrochemicals plants in Latin America — reached a record 22,400 b/d in September, Braskem management said earlier this month upon presenting the firm’s third-quarter results.

The milestone was achieved after completion in August of an expansion to the Fast Track project, an initiative to shore up ethane imports to the plant amid dwindling supply from Mexican state oil company Petróleos Mexicanos (Pemex).

Braskem Idesa, a joint venture between São Paulo, Brazil-based Braskem and Mexico’s Grupo Idesa, owns the Coatzacoalcos plant, which has capacity to produce 1.05 million tons/year of high- and low-density polyethylene using ethane as the principal feedstock.

The plant was the subject of a high-profile dispute with the Mexican government last year as President Andrés Manuel López Obrador demanded renegotiation of the ethane supply contract with Pemex.

The parties announced an agreement in September to reduce Pemex’s supply commitment to 30,000 b/d from 66,000 b/d, and to jointly work toward development of a roughly $400 million ethane import terminal to meet all of the plant’s feedstock needs.

Braskem Idesa imported 18,600 b/d of ethane on average from the United States during the third quarter, equal to about 74% of Fast Track’s current 25,000 b/d capacity. Third-quarter imports were more than double the amount recorded in 3Q2020.

Braskem reported a 58% year/year increase in U.S. ethane prices during 3Q2021, driven by increased natural gas prices and “the increase in demand for ethane for ethylene production given the normalization of petrochemical operations in” North America.

Braskem Idesa is working on a further expansion of Fast Track to 35,000 b/d, with the completion expected in 2Q2022. This will allow roughly half the plant’s feedstock to be imported via Fast Track, with the other half coming from Pemex, said Braskem CFO Petro Freitas during an earnings call to discuss the quarterly results.

That’s only the beginning though, as Freitas said Braskem hopes to take a final investment decision over the coming weeks on the terminal, which is slated to enter service in 2024.

The terminal will reduce costs associated with ethane imports and it will also be safer, Freitas said, as imported ethane will be transported to the plant via pipeline as opposed to the current method of trucks.

Under the modified ethane contract, Pemex’s reduced supply commitment will remain in effect until the scheduled startup of the import terminal in 2024, subject to extensions in the case of delays in licensing or permits caused by Pemex or the Mexican government.

Pemex and the government have committed “to support and perform activities to build and operate” the terminal, Braskem said.

Cenagas in late 2020 temporarily cut off the service amid demands by Pemex to renegotiate the ethane contract.

During the third quarter, “petrochemical spreads remained at high levels and above the up cycle of the petrochemical industry compared to 3Q20,” said Braskem’s Rosana Avolio, head of investor relations. This was “mainly due to global supply chain constraints related to impacts from natural events, closing of ports to contain the Delta variant in Asia and [the] global container shortage and associated rise in freight prices,” Avolio said.

Braskem reported net income of $677 million for the quarter, versus a net loss of $258 million in the third quarter of 2020.