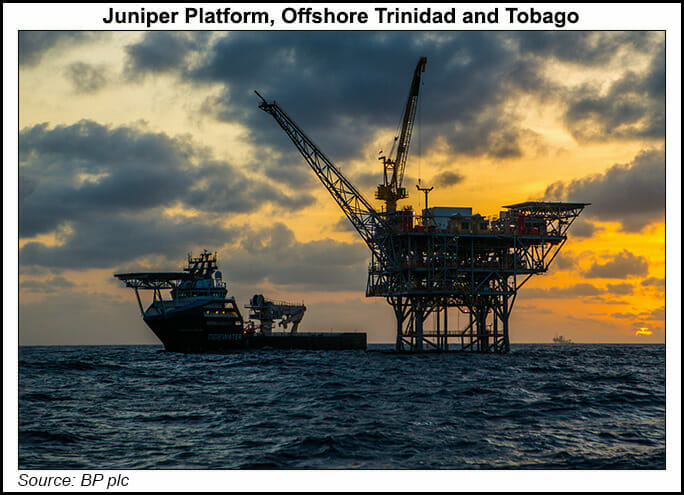 The three-well subsea development by BP Trinidad and Tobago LLC (bpTT) ramped up ahead of schedule and under budget. Matapal ties back to the bpTT’s existing Juniper platform, which is about 80 kilometers (50 miles) off the southeastern coast of Trinidad in water that is 163 meters (535 feet) deep.

“Natural gas will play an important role in the energy transition and to the economy of Trinidad and Tobago for decades to come,” bpTT President Claire Fitzpatrick said. “We are committed to a strong energy future in Trinidad and Tobago, and this project plays a critical role in delivering that.“

Matapal is transporting supply into the T&T gas market from resources discovered by the Savannah exploration well, which was drilled in 2017. When all of the Matapal wells are online, initial production is expected to be 250-350 MMcf/d.

Fabrication work on Matapal began in 2019, with the Juniper platform modified to install subsea equipment. Most of the fabrication work to adapt the platform “was completed locally,” bpTT noted. Matapal supply is being delivered to Juniper via two flexible flowlines.

With 15 offshore production platforms, bpTT is the dual nation’s largest hydrocarbon producer, accounting for about 55% of the gas production.

Matapal, sanctioned in 2018, follows the ramp up of bpTT’s Angelin in 2019. Angelin includes a platform and four wells about 60 kilometers (37 miles) offshore Trinidad’s southeastern coast in 65 meters (213 feet) of water.

At the time Cassia was sanctioned, Fitzpatrick said it would be “important in maintaining the stability of Trinidad’s gas production, supplying downstream customers” and for the nation’s liquefied natural gas (LNG) supply.

T&T’s Atlantic LNG began operating in 1999 and at one time was one of the largest exporters in the world. Atlantic has a four-train liquefaction facility at Point Fortin on the southwestern coast of Trinidad with capacity of 15 million metric tons/year.

T&T in the early 2000s served as the major source of LNG for what was at the time a thirsty U.S. market, and at the time supplied almost 80% of domestic imported gas. T&T’s good fortune was fueled by a partnership between BP, the former BG plc (now part of Royal Dutch Shell plc), Spain’s Repsol SA and the National Gas Co. of T&T to build the first of four large LNG plants.