As it streamlines the Lower 48 operations before the business is a standalone, BP plc has put up for sale some of its legacy properties in the San Juan Basin, including interests in about 6,600 natural gas wells and stakes in a treatment plant in northwestern New Mexico. 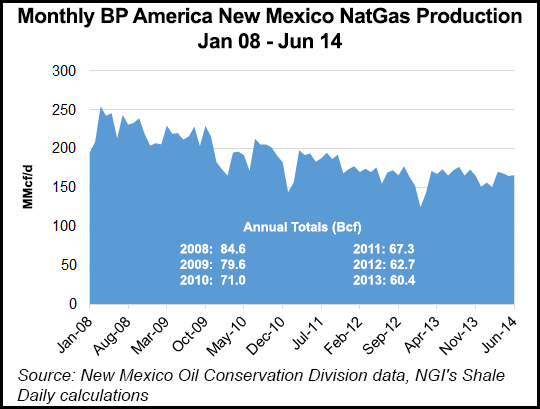 BP America Production Co. did not offer a financial estimate of what it could receive for the southern San Juan Basin package, to be sold through a competitive bidding process. David Lawler, now COO of SandRidge Energy Inc., is set to take the reins of BP’s U.S. onshore unit in September (see Shale Daily, Aug. 20).

“We are marketing for sale all currently producing horizons (geologic layers) of our 2,200 operated wells,” spokesman Brett Clanton said. Also to be sold are interests in 4,400 nonoperated wells, and the 50% share in the ConocoPhillips San Juan gas treatment plant.

The wells, mostly conventional, are located across 2,500 square miles and could generate as much as 28,000 million boe/d. BP also has around 100 coalbed methane wells in the Fruitland area of New Mexico.

“While BP will continue to maintain sizeable operations in the San Juan Basin, this part of the field is mature and better-suited for a company that specializes in late-life basin operations,” said Clanton. The decision, he said, is consistent with BP’s strategy to actively manage its asset portfolio, with a focus on “value over volume,” while selling properties “worth more to others.”

BP has been developing the San Juan leasehold across Colorado and New Mexico for close to 40 years. BP’s Colorado operations are based in Durango, and it is the top gas producer in the state, where it operates more than 1,500 wells, mostly unconventional.

In what seems like a lifetime ago for domestic natural gas prices, BP in early 2007 began a program to invest up to $2.4 billion through 2020 to recover an estimated 1.8 Tcf from coalbed methane gas in the southwestern Colorado part of the basin (see Daily GPI, Jan. 31, 2007). The infusion at that time was expected to increase BP’s net output of 425 MMcf/d net by more than 20%. That project isn’t expected to be impacted by the sale.

This past April, CEO Bob Dudley said the company, unlike some of its peers, had plenty of infrastructure to back up its positions in several onshore basins, including the gassy San Juan (see Daily GPI, April 29). However, deploying rigs to the dry gas areas was questionable. It had no dry gas rigs running in North America at that time.

“Part of the question has to do with scale of operations in the various areas,” as to where BP might deploy gas rigs, said Dudley. “Certainly, with scale like we have in San Juan, it produces high rates of production but it’s pretty dry gas. I think that obviously, the first thing we’re interested in is our liquids because that’s where most of the value is.”

He acknowledged then that BP would be analyzing its onshore basin activity to determine where it might derive the most value for the standalone Lower 48 business, including San Juan, the Wamsutter formation, the Anadarko Basin and the Woodford Shale.

“Future staffing levels will depend on the needs of the buyer,” Clanton said.

The portfolio paring has been an ongoing process and BP seeks to shed about $10 billion more in assets, including a bundle in America’s onshore. In July BP sold gassy property in the Texas Panhandle and the Texas Hugoton field to Pantera Energy Co. for close to $390 million (see Shale Daily, July 8). Included were 500 BP-operated, low-rate, sour gas wells producing about 5,000 boe/d.