BP plc is taking delivery of six state-of-the-art liquefied natural gas (LNG) tankers to support the Freeport export project on the Texas coast and its expanding global portfolio, as it responds to a “growing demand for lower-carbon energy sources around the world.” 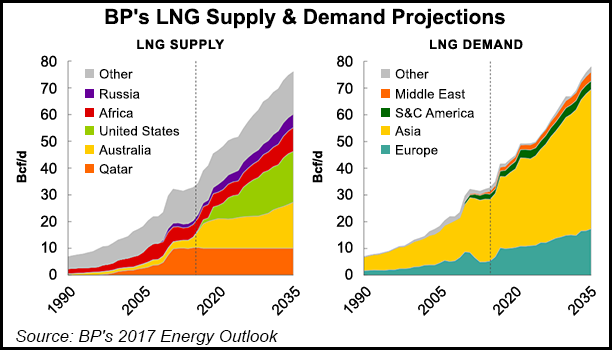 Finance partners KMarin and ICBC Leasing are investing more than $1 billion in the tankers, which would join existing tankers in BP Shipping’s fleet in 2018 and 2019, the London-based supermajor said.

The vessels in part would service a 20-year liquefaction contract with the Freeport LNG facility, as well as other international LNG projects in BP’s global portfolio.

“These vessels will significantly increase BP’s ability to safely transport LNG to anywhere in the world, directly supporting BP’s global natural gas strategy,” said BP Shipping CEO Susan Dio. “They also will be among the most fuel-efficient and technically advanced LNG tankers ever built.”

The new ships are designed to be about 25% more fuel efficient than their predecessors and would be fitted with reliquefaction plants. The plants would allow evaporated natural gas in the cargo tanks to be returned to the tanks as LNG, allowing the ships to deliver more gas to the market.

BP already has a long-term contract for 230 trillion Btu/year of LNG capacity at the Freeport LNG facility. The facility is under construction, and the first of four trains expected to be operational by the end of 2018.

Freeport’s first three liquefaction trains are set to launch sequentially through 3Q2019, each with more than 5.0 million metric tons/year (mmty) of capacity.

Thailand’s PTT Public Ltd. Co. at the end of 2016 also struck a 20-year agreement with BP for about 1 mmty, with the gas sourced from BP’s supply portfolio, including the Freeport project.

BP also participates in LNG projects in Australia, United Arab Emirates, Indonesia, Trinidad and Angola. The portfolio includes a mix of long-term, mid-term and short-term supply to enable the producer to meet the ever-changing needs of its global portfolio of customers.

“BP has built a diverse LNG portfolio spanning both established and emerging markets,” said BP’s Alan Haywood, CEO of global supply and trading business. “Freeport is the latest example of how BP continues to expand the reach of our LNG business and serve our customers with flexible solutions through leveraging our scale, connectivity and relationships — and another sign of our commitment to remaining at the forefront of this rapidly growing and important global business.”

The 2017 BP Energy Outlook is forecasting the global LNG trade will grow seven times faster than pipeline gas trade, and by 2035, BP expects LNG to account for around half of all globally traded gas.

BP Shipping carries the producer’s oil and gas cargoes to market and provides technical and maritime expertise to business activities around the globe. U.S. operations include onshore offices in Houston, Chicago, Anchorage and Ferndale, WA. The shipping arm launched a fleet rejuvenation program in 2016, with 32 vessels set for delivery over a three-year period.