BP plc’s request to halt some settlement payments related to the Macondo well blowout in 2010 has been rejected by the New Orleans court overseeing the multi-district litigation. 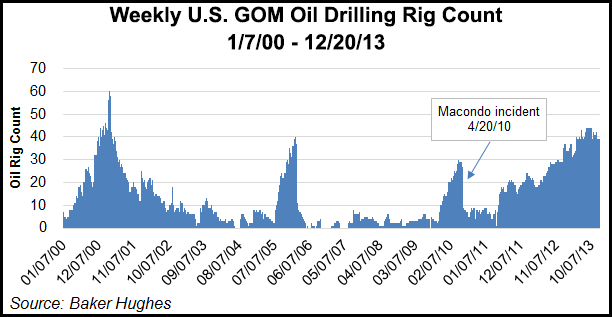 U.S. District Judge Carl Barbier on Tuesday ruled that proof of economic losses caused by the giant oil spill did not have to be detailed (In Re Oil Spill by the Oil Rig Deepwater Horizon in the Gulf of Mexico, No. 10-md-02179). The U.S. Court of Appeals for the Fifth Circuit had ordered Barbier earlier this month to review the settlement claims process because of possible faulty claims (see Daily GPI, Dec. 3; Oct. 4).

BP’s legal team over the past year has been contending that claimants may only recover losses if their damages were directly linked to the spill.

Because the court had “accepted BP’s previous position” on the damages issue, the producer should be barred from making new arguments that the losses be linked to the spill to qualify for compensation, said Barbier.

“BP’s current position is not only clearly inconsistent with its previous position, it directly contradicts what it has told this court regarding causation,” the court ruled. Imposing additional requirements would frustrate the parties’ attempts to reach a final resolution on the spill claims. “The delays that would result from having to engage in a claim-by-claim analysis” would be unduly burdensome.

However, Barbier ruled for BP that spill-related business losses be calculated by claims settlement officials with properly matched revenue and expenses, reversing a previous ruling that expenses and revenue didn’t need to be matched.

BP plans to appeal. “Awarding money to claimants with losses that were not caused by the spill is contrary to the language of the settlement” and violates established legal precedent, said a spokesman.

“Business owners across the Gulf should be pleased that Judge Barbier once again rejected BP’s efforts to rewrite history and the settlement,” said plaintiffs’ lawyers.

BP’s team isn’t going down without protest. On Monday the operator continued a public relations effort to turn the spotlight on officials of the independent Macondo settlement fund for the 2010 Gulf of Mexico explosion, claiming the recent resignations of top officials are further proof of “mounting problems” in the claims office.

The company has attacked the program for months, a process set up to compensate victims — individuals and businesses. The producer’s beef has centered on how the settlements have been handled, alleging that court-appointed administrator Patrick Juneau misinterpreted the language of the $7.8 billion settlement reached in 2012 (see Daily GPI, Dec. 28, 2012). BP in October estimated that settlement now is approaching costs of around $9.2 billion. Since July 2012, BP has settled about $3.8 billion in claims.

Ads in The New York Times, The Wall Street Journal and The Washington Post highlighted the recent departure of CEO David Odom and COO Kirk Fisher, claiming the departures followed revelations they had entertained subordinates at an unnamed “New Orleans strip club,” which the claims office had awarded more than $550,000 while the top bosses frequented the club.

Juneau confirmed the resignations, and said the men had wanted to “move on to other business opportunities.” The departures had “no effect on the claims review process.” No comment was made about BP’s allegations.

BP claimed in the ads that with the resignations of Odom and Fisher, five of the 10 senior claims program officials have “resigned or been terminated” since the claims office was created in mid-2012.

Former FBI Director Louis Freeh is leading an independent investigation of the claims process for BP. He said in a September preliminary report that “actual and apparent conflicts of interest involved the most senior officials” in the claims office, but he had found no evidence of wrongdoing by Juneau (see Daily GPI, Sept. 10). Freeh’s next report is due in early 2014.

The number of oil rigs in the GOM dropped precipitously following the Macondo blowout, but activity has rebuilt since then and stood at 39 on Dec. 20, well above pre-Macondo levels.