Protecting the role of natural gas in the global energy mix long-term is centered around cleaning up methane, a top BP plc executive said Tuesday. 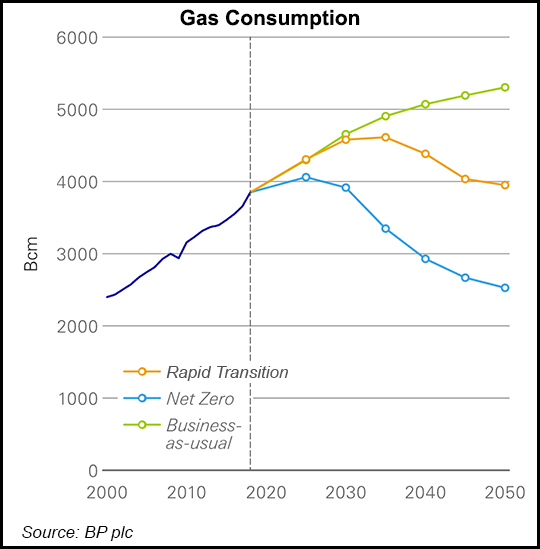 BP Energy Co. CEO Orlando A. Alvarez assured an audience at the 21st annual LDC Gas Forums Southeast conference that gas would play an integral role in the world’s energy mix over the long haul.

“It’s a big shift,” Alvarez said, as consumers crave fewer hydrocarbons and more renewables. For BP, it’s about the customers. With that as its goal, the pivot is “to provide solutions.”

Consumers want to keep their transportation mobility, which today is afforded through oil and gas. In addition, industrial customers need natural gas for manufacturing. Emerging economies are buying increasing volumes of LNG.

The solution is to “help them decarbonize…I assure you, hydrocarbons are still very important to BP and our shareholders. Natural gas is still a part of our strategy. I want to make sure I’m clear on that,” Alvarez told the audience.

“Here’s the crux of it…The most important point to take away is that in every scenario you see, gas exists.”

With the global shift to lower carbon, “this is the change we are preparing for…reimagining energy because the world is on an unsustainable path.” To meet the United Nations climate accord goals to reduce global warming, “things must be done.”

North America’s No. 1 natural gas marketer is charting a net-zero emissions path. BP in early 2020 launched its “new purpose” to become carbon free by 2050 or sooner. The strategy is a makeover as one of the top international oil companies to an integrated energy company.

Alvarez relied on BP’s most recent Energy Outlook to show the LDC audience how technology  underlines all things in helping to reduce methane emissions and ensure natural gas remains a viable alternative.

“Technology is improving,” and “methane is being cleaned up. We are starting to see the industry come together” to expand markets for not only LNG, but also biogas and responsibly produced gas.

Even with hydrocarbons use declining overall by 20%, gas would still comprise the majority of demand, Alvarez noted.

“It’s abundant, affordable and a reliable partner to renewables. There is strong demand for it.”

As important, industry has found that it can “make gas even cleaner and more flexible…

“The energy transition has the attention of the natural gas industry, and a lot is being done.”

BP’s “new ambition is to reduce routine flaring” in the oilfields, Alvarez said. In the Lower 48, capturing emissions would be centered in leaseholds that BP works in the Eagle Ford and Haynesville shales, as well as the Permian Basin.

Capturing methane emissions from oil and gas drilling “is key to protecting the role of gas on the way to net-zero emissions,” Alvarez said. “We have to clean up methane.”

The London-based supermajor, like its peers, already is under stringent European Union oversight to reduce emissions. U.S. operations face similar oversight, Alvarez noted. President Biden’s agenda is “all about reinforcing an all-government approach to climate change…” The “full-court press” goes beyond the White House to reach every tentacle of the government.

BP’s executive team understands the complexities of the energy transition in that no goal can be reached easily, Alvarez said. “It won’t happen overnight. We do have the size and scale, but we need to be as fast as we can make it.”

Gas also is proving to be a “good partner” for renewables as an intermittent fuel for seasonal storage. Decarbonization is finding new avenues for growth too. And gas will play a big role as some operators build their hydrogen portfolios.

“Every fuel has a role to play. It just has to be a competitive market,” Alvarez noted.

That noted, he said 38 states now have renewable portfolio standard targets, up from around 29 only a couple years ago. Some states are aiming to be carbon-free by 2035.

“Utilities are looking to diversify the supply mix,” and “gas is highly valuable.” Still, the onus is on industry, he said.

“Let’s make sure we keep working together as an industry to keep natural gas competitive and in the conversation.”