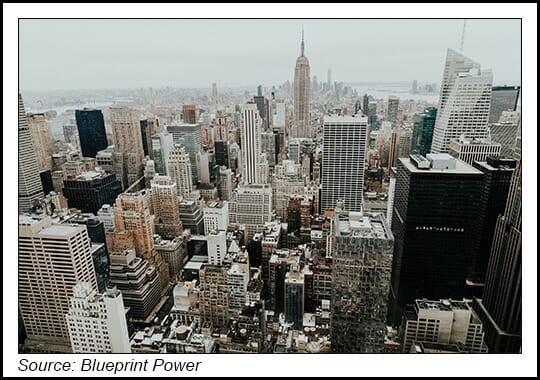 The New York City firm, founded in response to energy regulations after Hurricane Sandy in 2012 knocked out power to the region, uses bespoke algorithms to optimize the energy efficiency of buildings. Commercial building owners then may sell surplus energy stored in batteries or power generated on site using technology such as batteries and solar panels.

Blueprint now works with five of New York’s largest commercial real estate owners with more than 100 million square feet of property in the city. The buildings generate an estimated 13 MW of renewable power.

Blueprint is joining the BP Launchpad portfolio, established in 2018 as an in-house accelerator that provides multi-year funding for start ups. Under the Launchpad umbrella, plans are to expand Blueprint use in “several major U.S. urban power markets.”

How Big Could The Urban Power Market Grow?

By the end of 2022, BP and Blueprint are targeting an expansion in urban areas with a goal to reach 36 MW of renewable power.

“Decarbonizing dense urban areas is a key challenge as we work to play our part in realizing a net zero world,” BP’s Sam Skerry, senior vice president of Launchpad & Ventures. “Blueprint’s technology can help deliver this critical transformation. It can help secure access to renewable energy and, importantly, also create new business opportunities for many sectors. This is exactly the type of company BP wants to scale and scale fast through our bp Launchpad accelerator.”

Blueprint CEO Robyn Beavers, who founded the company, said working with BP would “enable us to maximize our impact on rapidly progressing global energy systems…Buildings hold huge untapped potential to improve energy resilience in an increasingly unpredictable world and to decarbonize our built environment.

“The time to grow and affect real change is now, and as a BP Launchpad company, we will have the partnerships and opportunities to help buildings make a positive contribution to the energy transition.”

The acquisition by BP comes after Blueprint launched a government-supported demonstration project in New York to show how its technology could generate electricity and expand electric vehicle (EV) charging capacity in the city. The project expects to have 150 EV chargers installed on-site at a residential building in Queens by 2025, where the company’s technology is in use.

BP has been investing in a variety of alternative energy projects as it works toward a goal to be net zero emissions across its operations by at least 2050.

Among other things, the integrated energy major is spending $269 million for three projects at its Cherry Point Refinery in Washington state to improve efficiencies, reduce emissions and increase renewable diesel production capability.

BP also is growing its U.S. renewable natural gas trade, with a recent deal in California and  a separate transaction with a Gevo Inc. Iowa facility under construction.