The United States likely will surpass Russia and Saudi Arabia this year to become the largest liquids producer in the world because of tight oil and biofuels growth, according to BP plc. North America also is expected to lead in shale gas output to 2030. 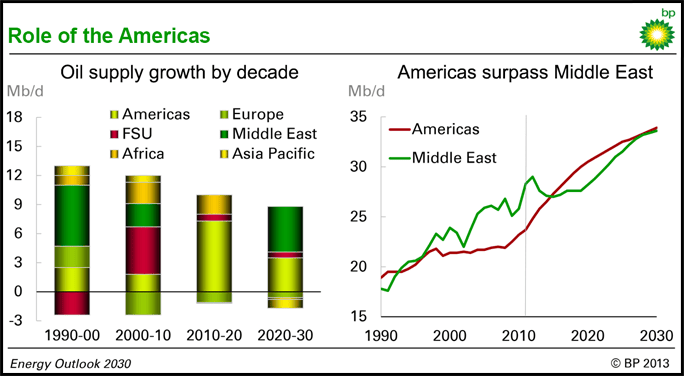 In its latest annual Energy Outlook 2030 issued on Wednesday BP predicted the “most likely” developments in global energy resources to 2030 from both a supply and demand perspective, said chief economist Christof Ruhl.

The U.S. oil gains are due in part to expected OPEC production cuts, he noted. Russia will likely pass Saudi Arabia for the second slot in 2013 and hold that position until 2023, when Saudi Arabia would regain its lead.

Meanwhile, shale gas is expected to grow by 7% a year and reach 54 Bcf/d by 2030, which would account for 37% of the growth of global natural gas supply. Most of the increases would be from North America.

“The current decade is forecast to experience the most rapid growth in global tight oil and shale gas production,” Ruhl said. Production would taper off from 2020 to 2030, but North America would continue to hold the top spot.

U.S. growth comes in part from “above-ground factors” that other countries lack.

In addition to its promising underground resources, the United States also has “a robust service sector with the world’s largest rig fleet of over 1,800 rigs in operation — a majority of which can drill horizontally — a competitive industry that spurs continued technological innovation, land access facilitated by private ownership, deep financial markets, and favorable fiscal and regulatory terms,” he said.

“As an example, output in the Bakken has increased from 1,000 b/d just five years ago to over 1 million b/d currently, roughly matching that of Colombia, as operators are drilling more oil wells than in all of Canada.”

The rapid uptick in U.S. oil production will lead to near self-sufficiency in energy by 2030, according to BP.

In the next four years the United States should become a net natural gas exporter, with exports reaching 8 Bcf/d by 2030. Net oil imports by 2030 are predicted to plunge by around 70%.

More striking, perhaps, is that by 2017, China is expected to replace the United States as the world’s largest oil importer. “Economic growth needs energy,” said Ruhl.

Producing unconventional gas and oil beyond North America will continue to pose challenges, “so we are unlikely to see shale growth at scale before 2030. For the European Union [EU], shale gas production of 2.4 Bcf/d in 2030 is not enough to offset the rapid decline of conventional gas production, leading to a 48% increase in net imports.

“China is expected to be most successful in developing shale gas outside North America…and is projected to grow to 6 Bcf/d by 2030, accounting for 20% of total Chinese gas production.” However, “China still requires rapid import growth of about 11%/year.”

Group CEO Bob Dudley said the latest outlook “underlines the power of competition and market forces in driving efficiency and innovation — important not only in unlocking new supplies such as unconventional oil and gas, but also in improving energy efficiency and consequently limiting the growth of carbon emissions.”

A second message, he said, “is the importance of technology and innovation, which underpin the key trends…from the development of shale resources to the efficiency of power generation and improved vehicle fuel economy.”

BP’s outlook also “highlights the way energy resources are opening up,” Dudley said. “The energy industry is highly competitive and investment will flow to the places that possess the right resources below ground and the right conditions above it. Highlighting the above-ground factors that have made the U.S. and Canada engines for energy innovation can be instructive for other nations seeking to develop their domestic energy resources.”