The second phase of BP plc’s massive Thunder Horse South Expansion has been sanctioned, boosting output at one of the largest fields in the deepwater Gulf of Mexico (GOM). 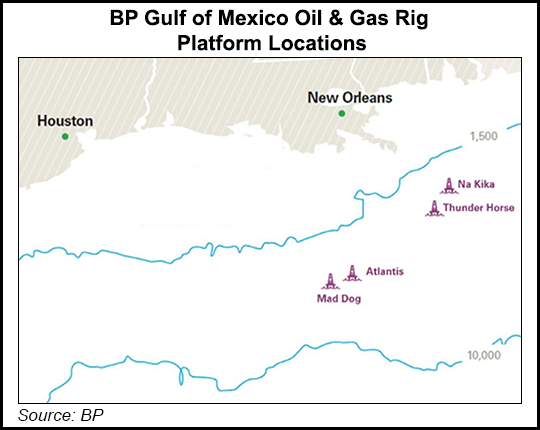 The project is expected to add an estimated 50,000 boe/d gross at its peak at the existing Thunder Horse platform, with first production expected in 2021.

“This latest expansion at Thunder Horse is another example of how the Gulf of Mexico is leading the way in advantaged oil growth for BP, unlocking significant value and safely growing a high-margin business,” said BP’s Starlee Sykes, regional president for the GOM and Canada. “It also highlights our continued growth and momentum in a region that will remain a key part of BP’s global portfolio for years to come.”

The upstream project includes two new subsea production units roughly two miles to the south of the existing platform with two production wells scheduled in the near term. Eventually, eight wells are to be drilled in the overall development.

Phase 2 follows several other major expansion projects. An earlier South Expansion project started up in early 2017 ahead of schedule and under budget, raising output by 50,000 boe/d. Last October, the Thunder Horse Northwest Expansion came online to boost production by another 30,000 boe/d. BP in 2016 also started up a water injection project at Thunder Horse to enhance oil production.

Developed with co-owner ExxonMobil Corp. (25%), the Thunder Horse platform initially came online in June 2008. It sits in more than 6,000 feet of water and has the capacity to handle 250,000 b/d of oil and 200 MMcf/d of natural gas. The Thunder Horse field, discovered in 1999, is one of BP’s largest discoveries in the GOM to date.

Earlier this year, BP said recent breakthroughs in advanced seismic imaging had identified an additional 1 billion bbl of oil in place at the Thunder Horse field, highlighting the potential for further development opportunities in the future.

In the deepwater GOM, BP also operates the Atlantis, Mad Dog and Na Kika production platforms and has stakes in the nonoperated hubs Mars, Olympus, Ursa and Great White. The London-based supermajor is one of the largest leaseholders in the GOM with acreage in more than 200 lease blocks.