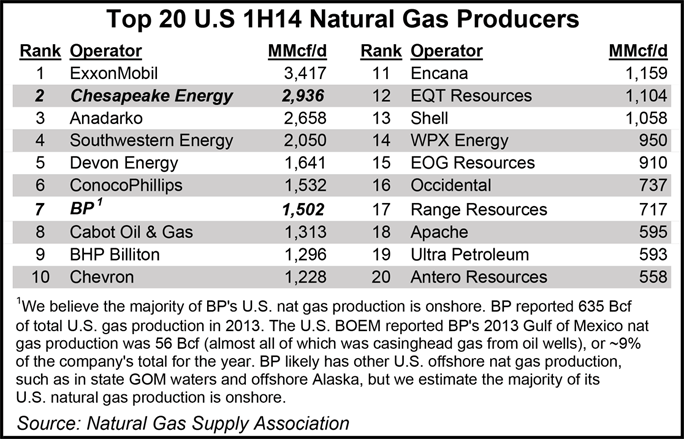 David Lawler, 46, is to begin Sept. 15 and would report to BP’s Upstream Segment CEO Lamar McKay. Lawler would take over the new unit, which is expected to have a new name, after BP formally establishes the onshore oil and natural gas business in the continental United States (see Daily GPI, March 4).

“With an impressive track record at integrated oil and gas companies as well as independents, Dave is uniquely qualified to lead our onshore business during this exciting transition,” McKay said. “His experience and skills match up perfectly with our goals for the business. I’m confident he will create a competitive and sustainable operation that will be a key component of BP’s portfolio for many years.”

The long-time Oklahoma City resident began working at Oklahoma City-based SandRidge in 2011. He previously was president and CEO for four years at PostRock Energy Corp., also based in Oklahoma. Lawler also spent close to a decade at Shell Exploration and Production Corp. He began his career as a production engineer at predecessor Conoco Inc. and also worked at the former Burlington Resources Corp.

“I’m looking forward to leveraging BP’s talent and resources while running the business as if it were an independent,” Lawler said. He graduated from the Colorado School of Mines and earned a masters degree from Tulane University.

The combined talents of the Lawler brothers over two of the biggest domestic onshore natural gas producers could prove a potent mix in the U.S. exploration sector. A rising executive with Anadarko Petroleum Corp. Doug Lawler took over Chesapeake’s operations in May 2013 (see Shale Daily, May 21, 2013). As only the second CEO to lead the company, he quickly has put his stamp on the independent, the second largest natural gas producer in the United States.

Like his brother, Doug Lawler also is petroleum engineer by trade and a Colorado School of Mines graduate who began his career with Kerr-McGee Corp., which Anadarko acquired in 2006. He holds a masters degree in business administration from Rice University.

Chesapeake and BP produced respective natural gas totals of 2.9 Bcf/d and 1.5 Bcf/d in the United States during the first half of 2014, which combined is 1.0 Bcf/d higher than the 3.4 Bcf/d produced by market leader ExxonMobil Corp., according to Pat Rau, director of Strategy and Research for Natural Gas Intelligence.

“While BP has a sizable presence in the Gulf of Mexico, we believe the majority of the company’s U.S. natural gas production is onshore, meaning the Lawler family will oversee the largest block of onshore gas production in the country,” Rau said.

Once separate, BP would continue to own the separate exploration and production unit, but Lawler and his management team would develop and implement the strategy to expand the oil and gas portfolio.

The new business also is to have separate governance, processes and systems to address the onshore operating environment. Separate financials for the business would be disclosed beginning in 2015.

In addition to its top position in the deepwater Gulf of Mexico (GOM), BP’s U.S. onshore portfolio stretches from the Gulf Coast onshore north through the Rocky Mountains. The portfolio includes an unconventional resource base of 7.6 billion boe across 5.5 million acres. BP also has an interest in close to 20,000 wells in the domestic onshore.

Chesapeake and BP have been onshore partners for years, beginning with some mega deals in 2008. That summer, BP America Inc. paid $1.75 billion to acquire all of Chesapeake’s interests in 90,000 net acres in the Arkoma Basin of the Woodford Shale (see Daily GPI, July 18, 2008). In another venture, Chesapeake and BP America formed a joint venture giving BP a 25% interest in Chesapeake’s Fayetteville Shale assets in Arkansas for $1.9 billion (see Daily GPI, Sept. 8, 2008).

With Lawler’s departure, SandRidge has promoted Craig A. Johnson to executive vice president of operations and initiated a search for a new COO. Johnson, 47, currently is senior vice president of development for Oklahoma. CEO James Bennett noted that Lawler had done a “remarkable job” in leading the operations team.