With one-third of its global energy reserves in the U.S. onshore, BP plc is preparing to do battle with shale-focused independents by separating its domestic operations, management said Tuesday. 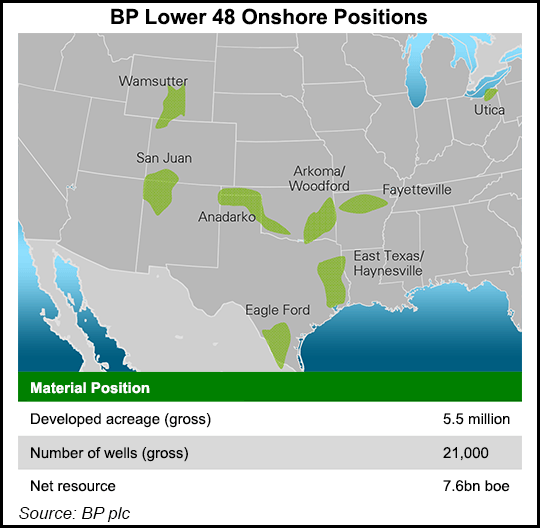 The separate business isn’t designed as a spin-off, but CEO Bob Dudley didn’t rule out sharing the venture with another explorer. He and other executives, including upstream chief Lamar McKay, spent most of the morning during an annual investor conference laying out plans for the separation.

With a big part of its business entrenched in the U.S. Gulf of Mexico and three international hubs, BP has too much to do to focus on what it has within the portfolio, McKay said.

“We have studied how competitive we are and how that compares to others. We concluded that we have significant potential to improve performance further.” A competitive environment “requires speed of innovation, faster decision making and shorter cycle times,” he said. Creating a separate unit would “focus on unlocking value from the existing portfolio.”

Although it’s been a bit neglected, the domestic onshore “is key to our upstream strategy because we believe the region will remain at the forefront of innovation and drive global learning in unconventional resources.”

BP for years has remained the top North American natural gas marketer (see Daily GPI, Dec. 12, 2013). The North American gas unit operates across a big chunk of U.S. territory, estimated at about 5.5 million acres gross of developed acreage that extends from the onshore Gulf Coast, north through the Rockies, and with a presence in several domestic gas basins. The portfolio has an unconventional resource base of 7.6 billion boe, with an interest in more than 21,000 wells and about 70,000 royalty owners. It also operates more than 2,000 miles of gathering lines in the United States.

In 2008, BP began building its onshore domestic acreage in two partnerships with Chesapeake Energy Corp., which handed it acreage in the Fayetteville and holdings in the Arkoma/Woodford (see Daily GPI, Sept. 3, 2008). Haynesville land was sold that year also by Chesapeake and the former Plains Exploration & Production Co. (see Daily GPI, July 2, 2008). The majors and big independents frequently use third parties to grab leaseholds, but today BP said it has about 5.5 million acres (gross) in the U.S. onshore.

BP was relatively tight-lipped on Tuesday regarding the acreage breakdown in the United States. Chief economist Christof Ruhl said in January the produced volumes of U.S. shale gas eventually would be larger than conventional gas resources ever were (see Shale Daily, Jan. 15). At that time Dudley said BP saw a future that “is different in several respects” because of the domestic unconventional revolution. The outlook to 2040 “underlines the power of competition and market forces in driving efficiency and innovation — important not only in unlocking new supplies such as unconventional oil and gas but also in improving energy efficiency and consequently limiting the growth of carbon emissions.”

For instance, he cited the Eagle Ford as one of the stronger domestic regions. There, BP has produced more than 500 MMcf/d within three years through a joint venture with Lewis Energy. In 2012 BP said it had accumulated close to 450,000 net acres in the play (see Shale Daily, Feb. 9, 2012).

A new management team is to be housed outside the Westlake campus in Houston.

“With the rapidly evolving environment, our business has become less competitive,” Dudley said. The new unit “will have separate governance, processes and systems designed to improve the competitiveness of its portfolio.”

Separate financial statements for the unit are to begin in 2015.

“Our overriding goal is to build a stronger, more competitive and sustainable business that we expect will be a key component of BP’s portfolio for years to come,” McKay said.