A $1.3 billion expansion has been sanctioned by BP plc for its deepwater Atlantis field in the Gulf of Mexico (GOM), with “significant additional oil resources” identified by the supermajor that could expand development opportunities around all of its offshore U.S. production hubs. 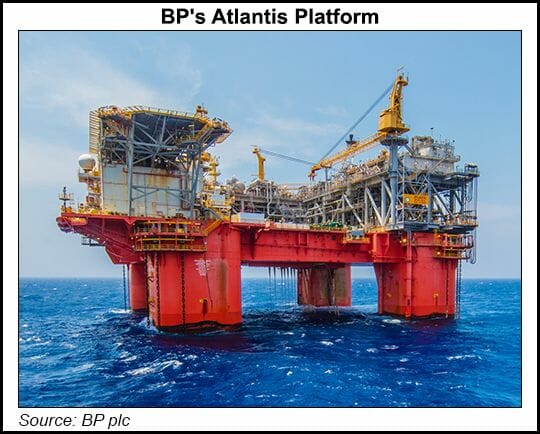 The Atlantis Phase 3 development is the latest example of BP’s strategy to expand its advantaged output through existing production facilities. Approving the expansion came after BP’s recent breakthroughs in advanced seismic imaging and reservoir characterization, which unearthed an additional 400 million bbl of oil in place (OIP) in the Atlantis field.

CEO Bob Dudley last fall had said BP needed to continue investing, “not to find and produce as much as we can, but to access the most advantaged new barrels that will be needed to make up for declines.”

BP, which operates and holds a 56% stake in Atlantis, partners with BHP, which is expected to soon make a final investment decision about participating in the expansion.

“BP’s Gulf of Mexico business is key to our strategy of growing production of advantaged high-margin oil,” upstream CEO Bernard Looney said. “We are building on our world-class position, upgrading the resources at our fields through technology, productivity and exploration success.

“And these fields are still young — only 12% of the hydrocarbons in place across our Gulf portfolio have been produced so far. We can see many opportunities for further development, offering the potential to continue to create significant value through the middle of the next decade and beyond.“

Atlantis Phase 3 is to include a new subsea production system from eight new wells that would be tied into the current platform, 150 miles south of New Orleans. Scheduled to come onstream in 2020, the project is expected to boost output at the platform by an estimated 38,000 boe/d gross at its peak. Phase 3 also would access the eastern area of the field, where the advanced imaging and reservoir characterization identified additional oil in place.

“Atlantis Phase 3 shows how our latest technologies and digital techniques create real value — identifying opportunities, driving efficiencies and enabling the delivery of major projects,” regional GOM/Canada President Starlee Sykes said. “Developments like this are building an exciting future for our business in the Gulf.”

Proprietary algorithms developed at BP’s Subsurface Technical Center in Houston were applied on a seismic data run at its Center for High Performance Computing, which opened in 2013 as one of the largest supercomputers in the world dedicated to commercial research. The Technical Center specializes in advanced seismic imaging and enhanced oil recovery.

The proprietary algorithms enhance a seismic imaging technique known as full waveform inversion, or FWI, allowing seismic data that would have previously taken a year to analyze to be processed in only a few weeks.

BP on Tuesday also announced two deepwater discoveries in Mississippi Canyon (MC) blocks at the Manuel and Nearly Headless Nick prospects. The Manuel discovery is in MC Block 520, east of the Na Kika platform, where the well encountered oil pay in Miocene sandstone reservoirs. BP, which partners 50-50 in the Manuel field with Royal Dutch Shell plc, expects the reservoir to be developed via subsea tieback to Na Kika.

BP has a 20.25% stake in the Nick discovery in MC Block 387, operated by LLOG Exploration Co. The well encountered oil pay also in Miocene sandstone and is expected to be tied back to the nearby LLOG-operated Delta House facility. Partners in the prospect also include Kosmos Energy Ltd. and Ridgewood Energy.

Growth from the deepwater would be supported by three Thunder Horse expansions: Northwest, South and a water injection project. BP also has a second platform, Argos, underway at Mad Dog, “which is on budget and on schedule to come online in late 2021,” management said.