BP plc’s largest production and drilling platform in the Gulf of Mexico (GOM), Thunder Horse, has ramped up an expansion project to boost deepwater output by up to 25,000 boe/d. 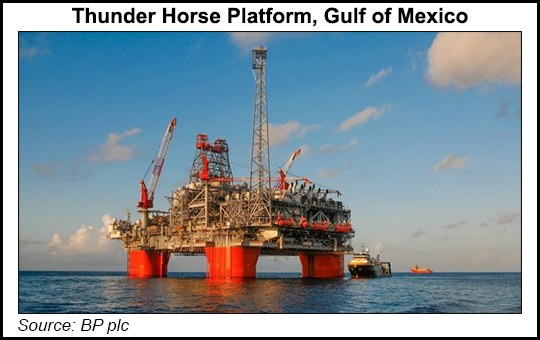 The Thunder Horse South Expansion Phase 2 project, with an initial two-well tie-back, added a subsea drill center roughly two miles from the main platform, which is about 150 miles south of New Orleans.

“This is another significant milestone for BP, completing the delivery of our planned major projects for 2021,” said Senior Vice President Ewan Drummond, who oversees Projects, Production and Operations. “This project is a great example of the type of fast-payback, high-return tie-back opportunities we continue to deliver as we focus and high-grade our portfolio.”

Eventually, eight wells are to be drilled as part of the expansion’s overall development in Mississippi Canyon Block 822. A major water injection project in the Thunder Horse field also was begun two years ago to recover another 65 million boe.

BP in June began production from the Manuel project, also in Mississippi Canyon, with two new wells tied into the Na Kika deepwater platform. BP also operates the Atlantis and Mad Dog platforms, with the Argos scheduled to come online in 2022.

While BP has set a goal to achieve net-zero emissions by at least 2050, it plans to fund the transition by using profits in the near term from its bountiful oil and gas program.