With natural gas and oil trading crushing it in the first quarter, BP plc proved that even as it transitions to net zero emissions, it’s still a major fossil fuel producer, with rising global demand likely to accelerate profits through the year. 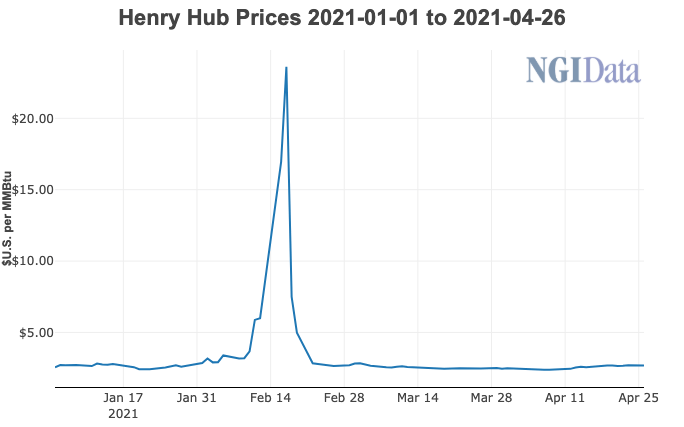 The London-based operator, which now prefers to be tagged as an “integrated energy major,” saw its profits more than triple on stronger Henry Hub natural gas and global oil prices. The  underlying replacement cost profit was $2.6 billion in 1Q2021, versus $100 million in 4Q2020, driven by “exceptional gas marketing and trading performance,” along with higher oil prices and refining margins.

“This quarter demonstrates what we mean by performing while transforming,” CEO Bernard Looney told analysts during a conference call Tuesday. “It has been a year of such uncertainty for the world and for the company. There have been many, many questions, of course, and that’s understandable but I think today’s results really answer many of those questions.”

The results were solid enough to lead BP to begin once again to buy back shares, with $500 million earmarked for 2Q2021, Looney said.

CFO Murray Auchincloss discussed how the higher commodity price environment proved to be a boon early this year. “The Henry Hub gas price averaged $3.50/Mcf, up from $2.50 in the fourth quarter,” Auchincloss told investors. The price gains resulted from Winter Storm Uri in February, “which resulted in very high gas demand combined with a substantial drop in production pushing prices to record levels.”

“We expect oil prices to remain firm as demand improves, driven by strong growth in the U.S. and China, the ongoing vaccine rollout programs and supported by continued supply intervention” by the Organization of the Petroleum Exporting Countries and their allies, aka OPEC-plus.

“We have to hold in mind that there’s still an awful lot of surplus oil that OPEC-plus is managing right now,” Auchincloss said. “There’s still a lot of uncertainty in the environment with the pandemic,” so BP plans to remain “prudent” as it makes decisions quarter to quarter.

BP, North America’s No. 1 natural gas marketer, is “not relying on exceptional trading going forward. But in a normal trading environment, this business is breaking even” at $45/bbl oil in the second half of the year, and by fetching $3.00 Henry Hub and at $13/bbl for refinery market margins.

“We don’t rely on exceptional trading to deliver the cash performance that we are delivering. We take that out of the equation when we factor in or breakeven for the second half of the year.”

BP expects global gas demand to recover to “above 2019 levels” during 2021, with liquefied natural gas demand increasing “as a result of higher Asian imports.”

BP’s trading business “makes about 2%” on top of the return on capital employed, he noted.

BP’s “cash engine” during 1Q2021 was resilient, Looney told analysts. Even though the major is capturing more low carbon opportunities, the profits today remain in hydrocarbons, he said.

“Two new major projects are now online, further underpinning our production target of 900,000 boe/d by the end of this year.”

The recent ramp of the Raven project in Egypt is set to deliver around 140,000 boe/d throughout this year. Also in start-up mode is the natural gas field in the R Cluster project in Block KG D6 offshore India, in which BP is partnering with Reliance Industries Ltd.

The Satellites Cluster is onstream and is to be followed by the MJ gas project in 2022.

“At peak the projects are expected to produce around 65,000 boe/d net, enough to meet around 15% of India’s gas demand,” Looney said.

“Once online, the project is expected to deliver around 65,000 boe/d to BP, supporting high margin growth through 2025,” Looney said. “In addition, we recently announced an oil discovery at the Puma West prospect near Mad Dog, further highlighting the strength of our business in the region.”

“During the first quarter, we increased our hopper of offshore wind and solar opportunities by 15 GW,” he noted. “Net to BP, our hopper now stands at 35 GW of opportunities that could be progressed into our renewable pipeline.”

BP’s “pipeline of identified projects” in renewables grew by 3 GW in 1Q2021 and now stands at 13.8 GW. The opportunities underpin a 2025 target of 20 GW net. BP earlier this year also announced plans to develop the UK’s largest blue hydrogen facility, targeting 1 GW of production by 2030.

BP is advancing an electric vehicle (EV) agenda too, as “electrification is core to our next-generation mobility strategy,” Looney said. The company is working with several original equipment manufacturers including BMW Group, Daimler AG and Volkswagen Group “to increase the scale, reach and utilization of our EV network…

“By 2030, we aim to have more than 70,000 BP-operated EV charging points. And expect to have growing margin share from convenience and electrification to around 50%…We already have an established presence in the UK, Germany and China. And we need to continue to rapidly scale up to meet growing customer demand.”

In addition, BP is leveraging its “established supply chain and project management experience” to advance opportunities in offshore wind, hydrogen, biofuels and carbon capture utilization and storage, “where our existing capabilities and integrated single operating model can create a competitive advantage,” Looney said.

For the macro outlook, the global oil market is forecast to “continue its rebalancing process.” Global stocks are expected to decline and reach historical levels, in terms of days of forward cover, at the end of 2021.

Second quarter reported upstream production is forecast to be lower than the first quarter mainly because of divestments and seasonal maintenance activities.

“We expect higher product demand across our customer businesses in the second quarter as restrictions begin to ease and vaccination rollouts continue,” management said in its macro outlook. “This should help provide some support to industry refining margins. However, realized refining margins are expected to show a smaller improvement due to the slower recovery in diesel and jet demand and a narrower North American heavy crude oil differential. In addition, we expect a higher level of turnaround activity in our refining portfolio.”