BP plc second quarter profit was off sharply from a year ago but it increased sequentially as the major producer continued to tout “drawing a line under” Macondo well blowout costs, as well as the success of cost-cutting efforts company-wide. 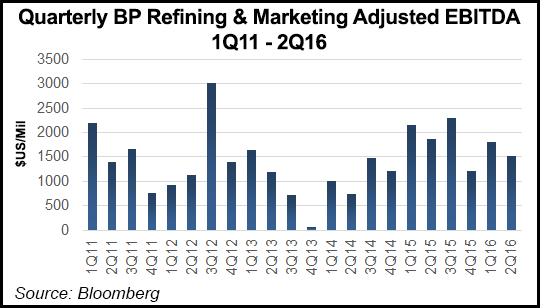 Cash costs over the past four quarters were about $5.6 billion lower than in 2014, and BP continues to expect costs for 2017 to be $7 billion lower than in 2014, the company said. Organic capital expenditure for the first half of 2016 was $7.9 billion; full year 2016 capital expenditure is now expected to be below $17 billion, which is down somewhat from the previous forecast.

Earlier this month, BP announced clarity on the costs related to liabilities for the Macondo well blowout in the Gulf of Mexico (see Daily GPI, July 15). CEO Bob Dudley on Tuesday continued to express relief at having the uncertainty of Macondo liabilities behind the company.

“We will always be mindful of what we have learned from that tragic accident,” Dudley said. “BP today is a stronger, more focused and more disciplined company. We continue to actively develop a strong, balanced portfolio and we are managing the business for value over volume. Our relentless group-wide focus on capital and cost discipline is helping BP to become much more efficient while maintaining the investment needed for future growth.”

BP has taken a net post-tax non-operating charge in the quarter of $2.8 billion. This includes a pretax non-operating charge of $5.2 billion associated with the Deepwater Horizon liabilities and other positive tax credits. Including fair value accounting effects and inventory gains, this resulted in a reported loss for the quarter of $1.4 billion.

Including the second quarter’s $5.2 billion pre-tax charge, the total cumulative pre-tax charge for the Macondo blowout and Deepwater Horizon rig explosion is $61.6 billion. This now includes BP’s estimation of all material liabilities; any liabilities not covered by this charge are not expected to be material to BP, the company said.

During a conference call Tuesday, Bernard Looney, chief executive for the upstream business, discussed Lower 48 operations. The Lower 48 began operating as a separate onshore business in 2015.

Looney said the Lower 48 “…is going very successfully for us,” in response to an analyst’s question.

Spending in the Lower 48 was cut earlier this year in response to low commodity prices. “Since then, we’ve actually allowed a little bit of capital to flow back into that business because the team there was able to generate rates of return sometimes well in excess of 20% for incremental investment,” Looney said. “We think this is meeting our hurdle rates; it’s a good investment, so we’ve actually… put capital back into the business for the second half of the year.”

Dudley said management is “excited” about the Lower 48. “We’ve got six million net acres. We’ve got 24,000 wells, 10,000 of them are operated, and we’ve got a resource base of about 7.5 billion bbl of oil equivalent there, 37 Tcf of gas and about 1.2 billion bbl of liquids,” Dudley said. “And we’ve got about 1,500 horizontal laterals identified that we can move on, about 40% of the resource yet to drill, which we can see that it’s economic at less than $3 [for gas] and less than $55 [for oil]. This business, as Bernard said, it’s got a lot of potential.”

Dudley was asked about BP’s interest in Mexico and in participating in that country’s upstream, only recently opened to outsiders with reforms in the energy sector.

“We have a very good relationship with Pemex and Mexico. We’ve worked there a long time. We’ve had people working there a long time,” Dudley said. “It’s a place we would like to work. We think that the skills we bring from the Gulf of Mexico and the deepwater can be helpful. The country has made an unbelievable change and revision in its constitution and reforms that go beyond the energy industry. And it would be a natural place for us to work. [I] can’t really comment yet on the terms because they’re not out there yet and [I] don’t know the details, but it’s a place that could be a natural fit with BP, but let’s see.”

For the time being, challenges lie ahead, though.

“As we look forward we expect the external environment to remain challenging, but we have a strong pipeline of new projects which will add 500,000 boe/d of new production capacity by the end of next year,” Dudley said.

“We are delivering significant improvements to the business that will stick at any oil price. We are now well down the path of transforming our business to compete, whatever the future holds. We now see a much stronger outlook for BP and are focused on growth, both for this decade and beyond.”

Compared with a year ago, second quarter results were hurt by lower oil and gas prices and significantly lower refining margins, but this was partly offset by the benefit of lower cash costs as well as lower exploration write offs. The Brent oil marker price averaged $46/bbl in the second quarter, up from $34/bbl in the first quarter but still significantly lower than $62/bbl a year earlier. While improved from the previous quarter, refining margins were the weakest for a second quarter since 2010, BP said.

In the first half of the year, BP received $1.9 billion from divestments, including the partial sale of its interest in Castrol India. At the end of the second quarter BP’s gearing level — or net debt to capital — was 24.7%, which is within the company’s target range of 20-30%.

“We continue to reset our capital and cost base and are moving steadily towards our aim of rebalancing organic sources and uses of cash by 2017 in a $50-55/bbl oil price range,” said CFO Brian Gilvary. “This underpins our confidence in sustaining our dividend going forward.”

The company’s upstream segment reported an underlying pretax replacement cost profit of $29 million compared to a loss of $747 million in the first quarter and a profit of $494 million in 2Q 2015. Compared with a year earlier, the result reflected the impact of lower prices for both oil and gas, partly offset by the benefits from lower costs.

The downstream segment reported an underlying pretax replacement cost profit of $1.5 billion compared with $1.8 billion in the previous quarter and $1.9 billion in 2Q 2015. Compared with a year earlier, the benefits of lower costs and a stronger fuels marketing performance were more than offset by the impact of “significantly weaker” refining margins. Underlying performance improvements in the downstream have enabled the delivery of pretax earnings $2.4 billion higher over the past four quarters than in a similar refining environment in 2014.

BP is the first of the major producers to report second quarter earnings.

(For a full listing of 2Q 2016 industry earnings calls, including links to NGI’s coverage of both the company and the call, please seeNGI 2Q16 Earnings Call PDF.)