BP plc has no plans to veer off an objective to reach net-zero emissions by 2050, but natural gas and oil continue to be the “engine” driving the company in the near term, CEO Bernard Looney said Tuesday. 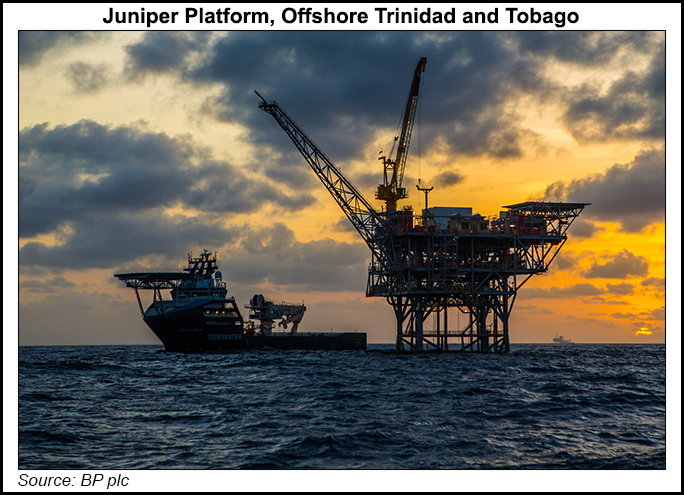 “We’ve always thought that the U.S. is a sort of an anchor point for global gas prices,” Looney said. “Gas supply in the United States is down materially…It used to be around 95 Bcf, and is down at 86 Bcf. It’s leveling off probably a little bit right now. But you are beginning to see exports on the rise.”

The U.S. gas rig count also is “very low,” which gives BP an edge with its Lower 48 holdings run by BPX Energy. Included in its deep portfolio is a substantial position in the gassy Haynesville Shale.

“One of the bright spots in the environment and one that we are pretty well positioned to take advantage of is gas prices heading to over $3 next year and that’s causing prices to rise in Europe and in Asia,” Looney said.

“We’ve got a fantastic position in the Haynesville Shale in the United States, probably one of the…premium gas resources in the United States,” which is in proximity to the Gulf Coast export market with “high pressure wells. You’ll see us increasing activity there to take advantage of the situation.”

BP has been the perennial leader in the quarterly ranking by NGI of top North American natural gas marketers, with 17.96 Bcf/d of volumes in 2Q2020.

U.S. gas supply “is expected to continue on a declining trend in 2021, largely due to a drop in associated gas production,” Auchincloss said. “Tightening gas balances have caused the prompt price to rise to $2.80, and the futures curve for Henry Hub now averages above $3.00 for 2021. This should provide some support to pricing in Europe and Asia until more gas comes to the market.”

Meanwhile, the Southern Gas Corridor, designed to move gas 2,175 miles from the Caspian Sea into Europe “is 100% mechanically complete,” Looney said. “It’s an extraordinary project that the company with its partners has completed over the last several years. That should begin production before the end of the year with gas from the Caspian into Europe. It’s nice to see that we’re entering a bit of a strengthening market.

“And obviously, we’ve got a strong position in Trinidad…and Tangguh in Asia.” The BP Trinidad & Tobago (BPTT) business is eyed for LNG export potential. In early 2019, BPTT ramped up gas production from the Angelin development, its 15th installation offshore, with production capacity of 600 MMcf/d. In 2017, it also started up two other Trinidad gas projects, Juniper and Trinidad Onshore Compression.

“Gas is a bright spot in the environment right now, and I think it’s one that we’re pretty well positioned to take advantage of,” Looney said.

The discoveries tie into plans for the Greater Tortue Ahmeyin FLNG development, which would be the first to establish the Tortue gas field as a world-class resource.

Tortue, said Looney, was impacted by the Covid-19 pandemic, “there’s no question about that. So that project has slipped to the right. It is the first phase in a multi-phase development there. The reality is that the resources are there, and there are giant resources that are high quality…

“I think we are positive on the medium to longer-term outlook for gas” from the region, said the CEO. “We’re believers in gas. The trigger for subsequent phases, quite frankly, is always going to be that very, very simple thing of can we meet the return thresholds that we’ve laid out? And we’ve been very clear on what they need to be for a new gas greenfield project.”

Auchincloss said “gas is a bright spot in the environment right now, and I think it’s one that we’re pretty well positioned to take advantage of. That should give you guys a lot of confidence that profitability from LNG is pretty much locked into 2025.”

Beyond 2025, BP has a “conservative target” to produce 30 million metric tons/year of LNG. “We have both merchant and equity opportunities,” Auchincloss said. “If the equity opportunities hit the hurdles, we’ll get it through equity offtake. If it doesn’t, then we’ll continue to pursue lots of merchant deals.

“We love the LNG business. It’s a great place to use our scale and to divert cargos across geographies to create profit, and it aligns well to our low carbon strategy moving forward.”

The executive team was asked about how the U.S. presidential election may impact the domestic business. BP is one of the largest developers in the Gulf of Mexico, and BPX Energy runs substantial holdings that beyond the Haynesville also include the Eagle Ford Shale and Permian Basin.

Looney said BP was agnostic about whether President Trump is reelected or Democrat Joseph R. Biden Jr. takes over in January. Biden has indicated he wants to ban future oil and gas drilling on federal land.

“We…avoid politics as you would imagine,” Looney said. “We are around the world; we work with different governments over different periods of time.” In Egypt, for example, where BP has been working for more than half a century, “we’ve been through all sorts of changes in that country over that period of time. And what we do is we stay out of politics, and we focus on what is good for the country and good for the people of that country in Egypt…

“The United States is no different to that. We’re not politicians. We work with whatever government is in power.” The U.S. election, he said, “is a week away.” BP is prepared to work “for the next 10, 20, 30 years…no doubt, in the United States with whoever is in power.”

If a ban on federal drilling were to be enacted, it would have no impact on BPX operations in New Mexico, he noted.

“We would be very little impacted by a change in that,” Looney said. “That would not impact BP materially at all were that change to be enacted.” BPX has no federal acreage.

The executives also were asked about the consolidation underway in North America with upstream mergers and acquisitions.

“We’re quite happy with the position we have,” Auchincloss said. “BPX continues to do a great job, costs continue to come down in the reservoirs and continue to look better. We had some great wells recently drilled in the Permian that were coming in three times expectations. So that’s super.

“I think most interestingly, there has been an awful lot of deflation in the sector, especially on the capital side as activity levels have dropped so much. I would expect from consolidation that you’ll have less activity in the future than we were thinking about when we invested in that.

“For our part, we have very material positions in the Haynesville and the Eagle Ford on the gas side, and of course, in the Permian and the Eagle Ford on the oil side. As the environment bounces back, we’ll invest more into that. It’s really unhedged, untouched acreage in many spots, and it’s probably the last untouched acreage across all those basins.

“And so it’s a tremendous opportunity for us to go into reservoirs that haven’t been touched before and start to develop them. We’re really pleased with our position and we’re just looking forward to exploiting it over time.”

“We have set out our stall on where we are taking BP,” Looney said, as the company slowly works toward net-zero carbon by 2050. “But now it is about getting on with the business of business. As we said in September, this is not about altruism or charity, this is about value creation. We will be judged by our actions, not by our words.”

The “engine room of BP” continues to be the hydrocarbons business, said the CEO. “We believe it is a high-quality business with great assets and resource options,” and BP expects to grow underlying production over the next 12-18 months.

“We are seeing continuous improvement in our drilling program with wells being delivered in record time and at lower cost, and with lower emissions. Additionally, early indications show a richer condensate mix than anticipated.”

Regarding the low-carbon future laid out in September, Looney said BP is building its established businesses and “looking for new and emerging opportunities.” For example, BP is partnering with Equinor SA to build a U.S. wind business, which includes developing offshore leases on the East Coast.

The solar business Lightsource bp has completed construction of three sites in Franklin County, PA, that are to deliver power to Pennsylvania State University under a 70 MW power purchase agreement. In China, BP signed a memorandum of understanding with JikoPower Technology to support the country’s ambition to reach 50% of power generation from alternative energy sources by 2030.

“This is a strategy of value not volume,” Looney said. “As we build and grow these businesses and transform our company, we will exercise rigor and discipline in our investment choices, pursuing only those opportunities that we believe can generate the returns we and our shareholders expect.”

The revamped organization has resulted in half of the senior executives losing their jobs, falling to 120. In total, BP’s headcount has been cut by around 2,800 to date this year, Looney noted.

“We continue to expect a total reduction of around 10,000 positions, the majority of which will happen by the end of this year,” he said. “And we are removing layers. In the new organization, around 50% of roles will be within five layers of the CEO,” versus 20% in the legacy business.

Auchincloss said following the “sharp contraction” in the first half of 2020, “there have been some early signs of global economic recovery as countries move to more regional or localized restrictions on movement and governments continue to offer monetary and fiscal policy stimulus.

“Reflecting this, Brent averaged $43/bbl in the third quarter, a 45% increase versus the second quarter. Gas prices were also stronger,” as Henry Hub averaged $2.00, “driven by strong demand in the power sector and a higher level of U.S. LNG exports.”

“Looking ahead, the gradual recovery in oil demand seen since the spring looks set to continue, led by strengthening demand in Asia,” Auchincloss said. Rising cases of Covid-19 across Europe and North American are creating some uncertainty, but inventories “are likely to draw through next year, although the pace at which inventories normalize will depend on the strength of economic recovery” and oil production compliance by the Organization of the Petroleum Exporting Countries and its allies.

Proceeds from divestments and other disposals in 3Q2020 were $600 million. BP has completed or agreed to transactions approaching half its 2025 target of $25 billion.