Hydrogen has the power to “reinvent” natural gas, and BP plc is looking to take the lead in the transition, a top executive said earlier this month. 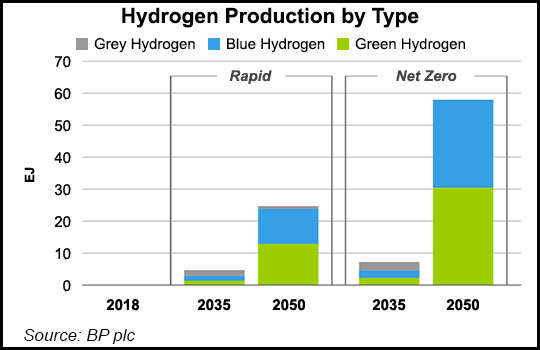 IEA has estimated hydrogen use could expand to around 210 million metric tons/day (mmty) by the end of this decade from 90 mmty in 2020.

“BP’s own analysis shows that hydrogen could have more than a 15% share in total global energy consumption by 2050,” Sanyal said. “So whatever way you look at it, hydrogen has a big role to play.”

Electrification also should increase over the next few decades.

“As this takes place, hydrogen can offer a reliable role by providing energy to activities which are difficult or costly to electrify,” Sanyal said. High-temperature processes can be costly in industry and long-distance transportation, including heavy-duty fleets.

“Put simply, hydrogen has a key role to play in the decarbonisation of hard to abate, energy-intensive heavy industries.”

“Importantly, the production of blue hydrogen helps overall global supplies of hydrogen to grow relatively quickly,” Sanyal said, “without relying too heavily on renewable energy, which needs time to gain a significant share of the overall energy mix.”

BP, he said, “Is ideally placed to help scale up hydrogen.”

CEO Bernard Looney has been publicly embracing BP’s expansion into hydrogen. Fossil fuels aren’t going away, but the carbon-free opportunities are “off the charts,” he said last fall. Hydrogen “is definitely a gas fuel of the future. There’s no question about that.”

However, Looney has said hydrogen is a long game. “It’s not something that’s going to happen overnight in terms of being a material part of BP’s portfolio…It’s 2030-plus.”

During CERAWeek in March, BP’s David Eyton, executive vice president of innovation and engineering, told the audience the energy major was going after a big chunk of the hydrogen market.

“I have no doubt that we need hydrogen as an energy vector and certainly my company is aiming to take about a 10% market share by 2030 in our core markets.”

Sanyal said BP’s hydrogen expansion would target markets in Australia, Germany, the Netherlands, the UK and the United States.

Last year BP also signed a letter of intent with Ørsted to develop green hydrogen powered by offshore wind at its Lingen refinery in Germany. Earlier this year the London-based producer announced plans to develop the UK’s largest blue hydrogen facility, H2 Teesside, which is targeting 1 GW of production by 2030.

BP has gained experience in engineering, building and operating some of the “world’s most ambitious commercial energy projects,” which “also means we are the right fit to scale-up hydrogen.”

There still is a “huge role for oil and gas companies to build hydrogen markets,” said the BP executive. “Many of the “clean hydrogen” uses, which would include a broad array of transportation fuels, “are already areas where we work with customers. And every customer we can work with to move to cleaner fuel is a step toward BP’s net-zero goals and the world’s net-zero goals.”