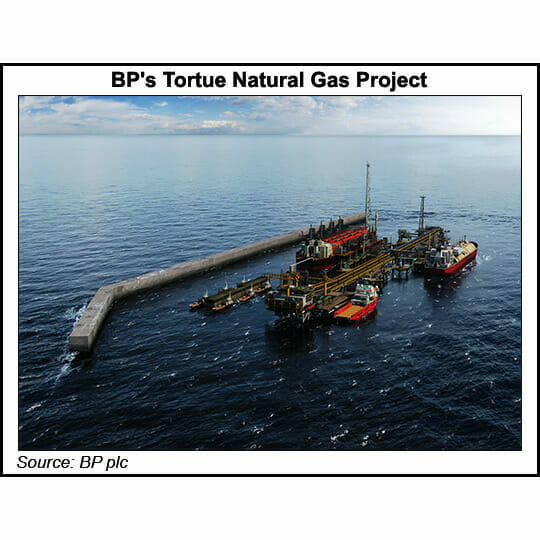 “We continue to make good progress quarterly and are still targeting first gas in 3Q2023 with the first [GTA] LNG cargo targeted for 2024.” Kosmos CEO Andy Inglis said during the second quarter earnings call earlier this month. He added that Phase 1 of the project was more than 80% complete at the end of June.

BP, which is leading the GTA, has turned its focus on African projects to better supply European markets after pulling out of Russian projects following Russia’s invasion of Ukraine. In addition to GTA, BP also has the Yakaar-Terenga and BirAllah liquefied natural gas projects in Senegal and Mauritania.

Senegal President Macky Sall and German Chancellor Olaf Scholz recently met to discuss supplying gas to Europe. Sall said Senegal is willing to talk with European countries to supply LNG, as Senegal’s LNG output is forecast to reach 2.5 mmty in 2024, and 10 mmty by 2030.

BP and Kosmos sanctioned the first phase in late 2018. The project holds an estimated 15 Tcf of offshore gas reserves that straddle the maritime border of the two West African countries.

LNG volumes from the first phase have already been sold and some gas from the Yakaar-Terenga field would be used as feedstock for Senegal’s gas-to-power plant, according to Rystad Energy.

Inglis said the floating production, storage and offloading vessel (FPSO) is under construction in China, and will arrive later than expected, likely in the fourth quarter. The FPSO is planned to export gas via a 22-mile pipeline to a complex near shore where Golar LNG’s Gimi floating LNG vessel would be installed. Golar said the 2.5 mmty vessel is expected to start up in late 2023.

Kosmos and BP decided on a September final investment decision for GTA’s Phase 2, after agreeing to a production sharing contract this month for the BirAllah and Orca gas discoveries. The partners have two years to submit a development plan for both discoveries.

GTA’s second phase has a planned capacity of 2.5 mmty. The Yakaar–Teranga and BirAllah LNG facilities could have capacity of up to 10 mmty.

“Gas from GTA LNG Phase 2, the remaining gas from Yakaar–Teranga and BirAllah are still uncontracted, and these volumes could benefit from what is expected to be a supply-constrained LNG market in the coming years,” Rystad said. “Like BP, other major companies might also look toward their African gas portfolios to address the likely gas supply deficit.”