With an expectation that the energy transition away from fossil fuels may be sooner than expected, BP plc on Monday said it plans to impair up to $17.5 billion on the value of its assets for the second quarter because of limited upside in natural gas and oil prices. 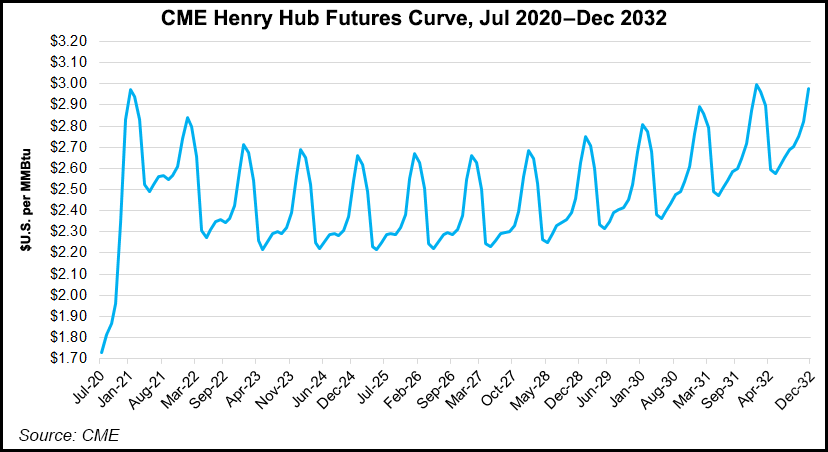 BP now assumes an average of $55/bbl Brent and $2.90/MMBtu Henry Hub gas from 2021-2050. The gas price reduction longer term is 31% lower than BP had forecast in its most recent annual report. The reduced long-term oil price is down by 27%.

The revised forecasts have come quickly since Covid-19 began to trample on energy demand.

In mid-February, only weeks before a global pandemic was declared, BP upended the autonomous upstream and downstream business distinctions to move toward becoming a net zero company “by 2050 or sooner,” by fundamentally transforming the entire organization.

As the coronavirus sapped demand, the London-based supermajor then warned that the gas and oil world was facing a world of hurt in the short term, and it trimmed capital spending. Management last week then announced the massive job losses, with 10,000 people expected to lose their jobs by year’s end.

“In February we set out to become a net zero company by 2050 or sooner,” CEO Bernard Looney said. “Since then we have been in action, developing our strategy to become a more diversified, resilient and lower carbon company.

“As part of that process, we have been reviewing our price assumptions over a longer horizon. That work has been informed by the Covid-19 pandemic, which increasingly looks as if it will have an enduring economic impact.”

BP has reset its internal price outlook “to reflect that impact and the likelihood of greater efforts to ”build back better’ toward a Paris-consistent world,” Looney said of the United Nations global climate accord that was reached in late 2015.

The lower long-term price assumptions are considered “to be broadly in line with a range of transition paths consistent with the Paris climate goals. However, they do not correspond to any specific Paris-consistent scenario.”

Regarding the one-time charges, management is reviewing whether to develop some exploration prospects, and “consequently is assessing the carrying values of the group’s intangible assets.” The impairment and intangible assets assessments are in progress, and BP has not yet precisely determined the impact.

However, BP currently estimates $8-11 billion in one-time charges against property, plant & equipment, as well as write-offs of exploration intangibles of $8-10 billion for 2Q2020 results, which in aggregate are $13-17.5 billion.

“All that will result in a significant charge in our upcoming results, but I am confident that these difficult decisions — rooted in our net zero ambition and reaffirmed by the pandemic — will better enable us to compete through the energy transition,” said the CEO.

Because Covid-19’s end is not in sight, “BP now sees the prospect of the pandemic having an enduring impact on the global economy, with the potential for weaker demand for energy for a sustained period.”

Management also has a “growing expectation that the aftermath of the pandemic will accelerate the pace of transition to a lower carbon economy and energy system, as countries seek to ”build back better’ so that their economies will be more resilient in the future.”

BP also has updated the outlook for carbon prices to a total emissions carbon dioxide (teCO2) estimate of $100/teCO2 in 2030.

“The impairment shouldn’t come as a big surprise,” said Wood Mackenzie’s Luke Parker, vice president, corporate analysis. “The risks were clearly flagged in BP’s 2019 annual report. While these are noncash charges, with no bearing on cash flows, the implications — near-term and long-term — are very real.”

If the writedown were to be $17.5 billion, it would “push BP’s gearing ratio to 45%,” including lease liabilities, Parker said. A $13 billion writedown would push gearing to 44% including the lease liabilities, “uncomfortably high. Greater urgency to pay down debt will put further pressure on the dividend. Of course, under BP’s latest price assumptions, cash generation will be less than previously anticipated.”

Over the longer term, the move is all about BP’s shift from fossil fuels, said the Wood Mackenzie analyst.

“While that will be a multi-decade affair, BP is already getting to grips with the idea that its upstream assets are worth less than it believed as recently as six months ago. Indeed, some of them are worth nothing. Big picture, we see this as another step in the re-rating of oil and gas, and the journey from ”Big Oil’ to ”Big Energy.’”