BP plc CEO Bernard Looney is juggling dozens of balls as the supermajor ramps up oil and natural gas projects worldwide, but the focus long term, he said Tuesday, is centered on ways to expand the opportunities toward a low carbon future. 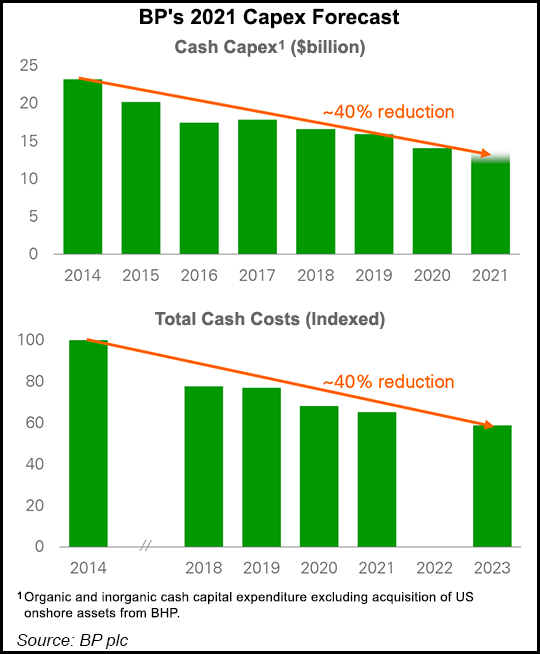 Speaking from London during a webcast to discuss quarterly results, Looney said last year’s debacle for the energy industry did not deter BP from a plan to reinvent itself.

“I think it’s fair to say that we are reporting on a tough quarter at the end of a tough year for everyone in a year in many ways unlike any we’ve ever had,” he said.

BP suffered from the sector-wide global contraction in oil and gas demand, and it reacted by sharply reducing capital expenditures (capex) and laying off thousands of people.

“But looking forward as we must do,” Looney told investors, “I am optimistic, particularly given the vaccines, but also because of the actions that we have taken across the company.”

Even with the challenges wrought by the pandemic, BP last year brought online four major oil and gas projects.

First gas flowed to European customers at the end of 2020 from BP’s Shah Deniz field in the Caspian Sea through the 3,500 kilometer (2,174 mile) Southern Gas Corridor pipeline. The complex project came in ahead of schedule and 25% under budget.

“Responding to the environment in the upstream, we delivered 20% lower capital spending than in 2019 with a continued focus on capital efficiency,” the CEO said. Still, “as always, we have more to do,” Looney said.

CFO Murray Auchincloss, who joined Looney on the call, said a positive was the “tightening” liquefied natural gas (LNG) markets at the end of 2020, which helped support a “strong recovery” in overseas prices.

“U.S. gas markets are likely to benefit from lower production and a recovery in the international LNG demand, driven by Asia,” Auchincloss said.

During 4Q2020 the company’s downstream performance “was significantly impacted by lower marketing performance, with volumes remaining under pressure due to Covid and the continuing pressure on refining margins and utilization…In addition, the result was impacted by a significantly weaker result in gas marketing and trading and higher exploration write-offs,” said the CFO.

With oil demand projected to recover this year and several third-party refinery closures announced, “we see a gradual improvement in the refining margin in 2021 once the stock overhang is absorbed by the market.”

In the BPX segment, which comprises the Lower 48 oil and gas operations, the unconventional development is centered today in Texas, with a bundle of assets in the Permian Basin, Eagle Ford and Haynesville shales. However, there is only one rig working today, within the Permian, versus a year ago when there were 13 rigs in operation.

The reinvention is to slowly transition from being an “international oil company” to “an integrated energy company,” Looney said. The No. 1 natural gas marketer in North America is boosting alternative energy investments by 2030 to $5 billion, a 10-fold increase.

“We recognize that we are a transitioning company, one of many across the economy and one of several in our sector,” Looney said. “We have the ambition to become a net-zero company, but our transition will not happen overnight.

“We are not yet green, but we are greening, and we are committed, not just because it is the right thing to do for the world, but because it is a tremendous business opportunity and we believe one that will deliver long-term shareholder value.”

Two offshore wind projects are being readied to provide New York with power. Three of the four projects “will have secured offtake,” Looney said.

Meanwhile, solar provider Lightsource BP, which became part of the portfolio in 2017, also continues to grow. The unit sanctioned 1.4 GW gross last year and added around 6 GW gross to its pipeline.

“Elsewhere, we are pursuing opportunities to partner with corporates, cities and industries looking to decarbonize,” said the CEO. “We have announced partnerships with Microsoft and Amazon,” as well as the cities of Houston and Aberdeen, Scotland. “Last week, we announced our first decarbonization strategic partnership in the aviation sector with Qantas. Together, we will seek to reduce carbon emissions and contribute to the development of a sustainable aviation fuel industry in Australia.”

The new “it” energy alternative, hydrogen, is going to be a viable resource “but it’s not something that’s going to happen overnight” to be material near term in the portfolio, Looney said. More likely hydrogen will become material beyond 2030.

Hydrogen, however, “is definitely a gas fuel of the future, there’s no question about that.”

The philosophy to green up the company is simple, Looney said. “We will only pursue opportunities that we believe can generate disciplined project returns of at least 8-10%.”