BP plc has found another way to make use of its natural gas via a $30 million investment in a California startup that produces protein for fish, livestock and pet feeds. 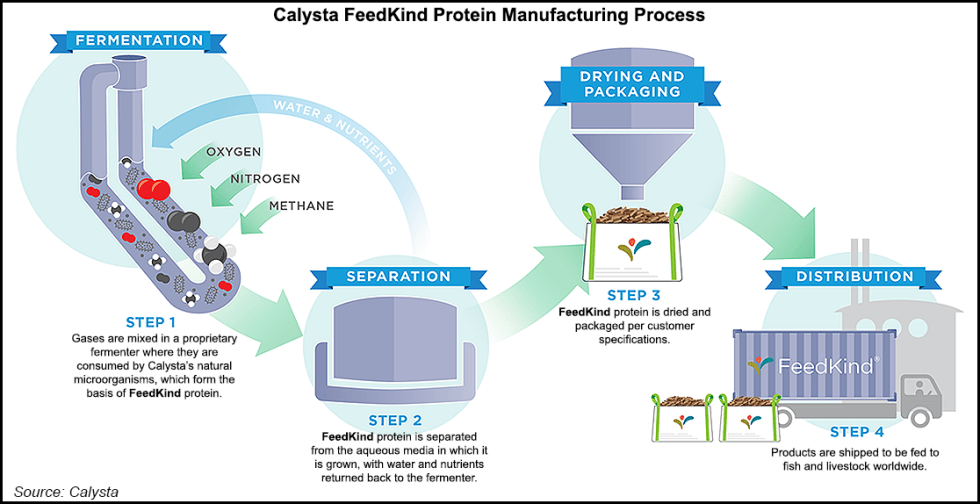 BP Ventures, set up a decade ago to invest in game-changing technology companies to accelerate innovation across the energy spectrum, said it would help fund Menlo Park’s Calysta Inc., an alternative protein producer.

The investment supports BP’s strategy to create markets in which gas may play a material role “in delivering a more sustainable future.” Calysta’s proprietary gas fermentation technology produces FeedKind protein, a sustainable feedstock designed for growing demand in the aquaculture and agriculture markets.

Based on an assumption that the current market size is 40 million metric tons/year (mmty), the global aquaculture market is projected by 2025 to increase by up to 25% to 55-65 mmty.

“Welcoming BP as a partner is a tremendous step forward for FeedKind protein and the best indicator yet that Calysta’s solution to food insecurity in a resource-constrained world can and will achieve global scale,” Calysta CEO Alan Shaw said.

In the FeedKind process, a naturally occurring bacteria is grown in a proprietary fermenter using methane as its carbon and energy source, which creates a single cell protein that is harvested and dried before it is turned into pellets. The natural fermentation process is similar to the production of yeast for bread.

BP’s investment would enable Calysta to expand production and support its ambition for a global rollout. The protein already is being produced from the company’s Market Introduction Facility (MIF) in Teesside, England to support market development with animal nutrition companies around the world.

To date, BP has invested more than $500 million in technology companies across more than 50 entities through BP Ventures.

“We are really excited to be working with the team at Calysta, bringing them into the BP Ventures family as we seek new commercial opportunities for our gas business,” BP Ventures managing director Meghan Sharp said. “Their technology complements our core business while providing opportunities for sustainable products for tomorrow.”