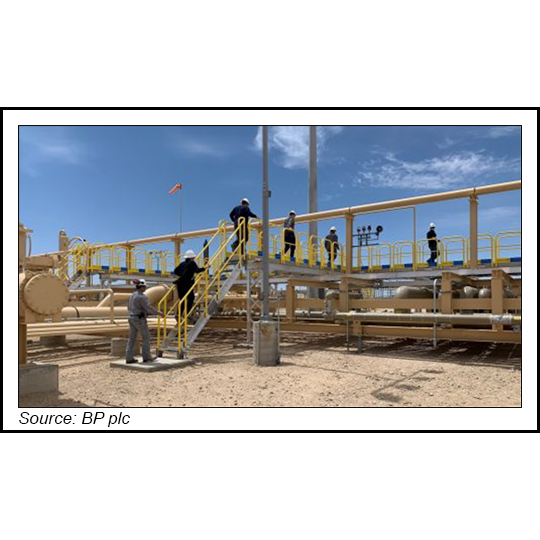 Looney and his executive team discussed the strong quarterly results and the outlook through the end of the year during a conference call.

With Russia shorting gas supply to Western Europe, global gas prices are forecast “to remain elevated and for there to be quite a bit of volatility,” the CEO said. Henry Hub prices are “largely uncertain,” as storage levels are “particularly low” across the United States.

CFO Murray Auchincloss told investors that “the outlook for global gas prices is heavily dependent on Russian pipeline flows. We expect prices to remain elevated and volatile during the third quarter due to a lack of supply to Europe.”

“Russia’s military action is…devastating people’s lives and disrupting energy supplies, and the cost of living is spiraling upwards, with energy costs a big contributor to that,” Looney said. “Since the start of the Ukraine conflict, power generation from coal in Europe has significantly increased. These are stock examples of what we call the energy trilemma,” ensuring energy is “cleaner, reliable and affordable.”

“Energy security is under threat,” Looney noted. “Energy affordability is an acute problem for many,” and there is “a pressing need for lower carbon energy…The obvious question for us and for our people is how can we help? That is why we are absolutely focused on delivering our strategy to become an integrated energy company,” by strengthening the gas and oil portfolio with a growing bundle of low-to-no-carbon investments.

Still, the Gulf of Mexico, where BP is one of the leading producers, continues to be a core business, Looney said. The company plans to soon add a fourth rig to its U.S. offshore business, where it hold stakes in several high-profile projects. Thunder Horse, BP’s largest U,S. offshore platform, ramped up an expansion project last fall to boost deepwater output by up to 25,000 boe/d.

BPX Energy, BP’s Lower 48 business, is centered in Texas, where exploration and development is focused in the Haynesville and Eagle Ford shales, and the Permian Basin. Total output climbed year/year to 324,000 boe/d from 273,000 boe/d.

BPX was running three Haynesville rigs at the end of June, one higher than a year ago. The Eagle Ford rig count remained flat year/year at four, as did the Permian rig count, which averaged two.

“We plan to increase investment in BPX Energy from around $1 billion in 2021 to around $1.7 billion in 2022,” Looney said. “Here, we’re leveraging a hopper of around 3,500 drilling locations capable of delivering returns of over 30% at just $55 West Texas Intermediate and $3 Henry Hub.”

Global growth also is in the mix.

“By the end of 2024, we expect to start up a further seven high margin major projects,” said the CEO. Another goal is to maximize reliability and efficiency, Looney said. Plant reliability  in the first half of 2022 increased to 95%-plus, while unit production costs fell by almost 11% year/year.

In exploration and renewables, BP plans to “selectively explore” to enhance the portfolio.

For the “transition growth engine,” Looney said BP is aiming to deliver around $2 billion in earnings by 2030 focusing on electric vehicle (EV) fleets and fast charging systems. BP now has a global network of 20,600 retail sites and integrated (i.e., with EV charging) convenience stores.

Looney said the EV customer base now numbers about 170,000 fleet customers. “We are accelerating our rollout plans. We now have around 16,000 charge points, up almost 50% since the same time last year,” he said.

BP’s global trading and shipping organization provided a large footprint. It allows “optimized and reliable electron sourcing over time,” Looney said. “One of the benefits of integration is expected to be the sourcing of electrons from our own renewable business.

During 2Q2022, BP repurchased $2.3 billion. BP intends to buy back another $3.5 billion shares by the end of September. The quarterly dividend also was bumped up by 10%. The dividend is to be funded within an unchanged 2021-2025 cash balance point of around $40/bbl Brent, $3/Mcf Henry Hub and $11/bbl refining marker margin.