“What we want as a gas marketer in Mexico is a competitive, transparent market as it is in the U.S.,” Alvarez said, adding that while it wouldn’t be an overnight transition, he was impressed with the speed of changes applied since the market-opening energy reform came into place in 2013-2014.

“I’ve been selling natural gas in Mexico for over 30 years, so I am familiar with the market,” he said. “I have been really impressed with the progress that has been made in this country.”

He said that the rapid development of cross-border infrastructure to take U.S. natural gas into the country, as well as new infrastructure within the country, are a positive sign for the market. “When the changes were made a few years ago, I was one of the skeptics. Is it really going to move as fast as they say? But it has been moving. And what I say now is, Keep those projects going.”

BP Energy is the natural gas marketing arm of BP plc, and operates in Mexico under the name BP Energía México. BP Energía México was one of three winners in the inaugural auction, conducted in February 2017 by Mexico’s Centro Nacional de Control del Gas Natural (Cenagas), for natural gas import capacity into Mexico in the wake of the country’s 2013-2014 market-opening energy reform.

Through the auction, BP secured 200,000 MMBtu/d of capacity on the Net Mexico pipeline, which spans 120 miles from the Agua Dulce hub in Texas to the Mexico border near Rio Grande City.

But the new government of Andrés Manuel López Obrador has cancelled upstream oil and gas auctions and has remained silent on any new capacity release auctions via Cenagas.

Alvarez stressed that policy change in the U.S. is shifting demand fundamentals there, with more renewable electricity projects replacing new gas-fired generation and numerous other “headwinds” challenging the gas market. “Renewables are a good thing, but we also need natural gas. As an industry, let’s make sure that we stay close to it and we’re being heard,” he said. “We need to make sure we are promoting what natural gas can do for the climate, prices, development – all the different attributes natural gas has. In Mexico and the U.S.”

He said that Mexico can take advantage of this opportunity, as the industrial sector has with historically low natural gas prices. “What’s happened over the last few years is those market signals have come into the U.S. market. Right now there are 47 industrial projects to be completed or complete, worth $80 billion in the United States. Industrial companies saw the opportunity, and have come in strong.”

Mexico industrial chamber Canacintra this week criticized López Obrador’s energy policies, and called on him to embrace the reform in order to ensure the reliable supply of affordable energy for the industrial sector.

Alvarez added that political changes in Mexico have not affected BP’s position in Mexico.

“Mexico is still very important to BP and we are progressing the strategy that we set five or six years ago,” he said, adding, “We have over 6 Bcf of U.S. gas a day coming into Mexico and now with the marine pipe running and the Wahalajara almost done you have potential for 10 Bcf.” 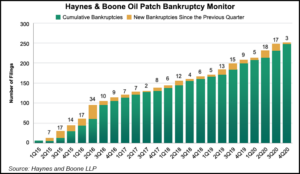 Houston-based Oasis Petroleum Inc., which works the Permian and Williston basins, has completed a financial restructuring and emerged from bankruptcy. The independent, which filed for Chapter 11 protection in late September, said it has reduced its prepetition debt by $1.8 billion. It is trading on Nasdaq under “OAS.” “Oasis is now uniquely positioned with a…