It’s only a matter of months before consolidation quickens across the oil and natural gas complex, two top energy veterans told a Denver audience Tuesday at the 27th Annual Rocky Mountain Energy Summit. 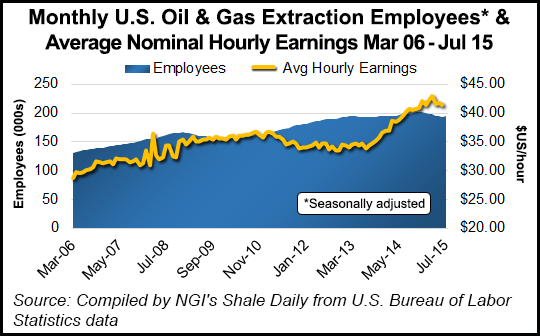 BP plc’s David Lawler, who helms the Lower 48 operations, shared a podium with DCP Midstream CEO Wouter van Kempen on the opening day of the annual energy meeting sponsored by the Colorado Oil & Gas Association. More than 1,200 people were registered for the three-day event as of Tuesday, with more than 100 exhibitors on hand.

There’s not a lot of good news for the industry these days, with oil prices still falling and natural gas prices stagnate. Job losses continue and projects have been canceled. All of those things are pointing to more mergers and acquisitions, the executives said. The two executives made their comments just one day before Schlumberger Ltd. and Cameron agreed to merge in a deal valued at $14.8 billion (see related story).

“It’s happening already,” van Kempen said Tuesday, acknowledging big tie-ups and not so big tie-ups across the onshore. “I think the bid ask spreads are pretty wide. The longer in this environment we are, those 52-week highs disappear from the board and become distant memories, and the bid ask spread comes in more.

Lawler thinks it’s going to get worse for companies with poor balance sheets.

“I don’t think the pain has hit as hard as we thought yet,” he said. “Now that puts companies in play.” However, private equity “has invested so much in the segment, and they don’t want to see these companies fade away quickly…so they’ve followed up” and provided many distressed firms with more capital.

He noted that BP had attempted to make a bolt-on acquisition recently in the onshore. It was outbid by two-to-one, all because of private funding.

“More money is coming in to protect the money already spent,” Lawler said.

Consolidation is slower today than many thought it would be because of the fresh funding.

“Funds are available,” said Lawler. “People aren’t ready to throw in the towel…We will see an increase, but I’m not sure when. It is much slower than I thought.”

The slowdown in consolidation is actually helping the overall market breathe, said van Kempen. “This big new difference may last a little longer. My personal opinion is by fall, we will see more people come to the table.”

DCP is preparing for downturn that will last “a long time,” he said. “That’s how we’re looking at it…Demand for ethane was supposed to be up by 50%,” and it’s nowhere today. Within two years or so, DCP is expecting some upturn. “But 2017, 2018 feels a long ways away. We are bracing for the long term.”

BP’s model for low prices is three to five years to match the spread, Lawler said. “That model is sustainable. Again the pressure is on the efficiency of operators.” He talked about a colleague who was “bragging” about his company’s ability to make the same number of wells using two rigs as it had with six a couple of years ago. Efficiencies are happening so fast, “we can’t count on the rig count as an indicator of how much gas, how much oil, we have coming on.”

Looking at the factors that drive demand, and therefore prices, “a lot of positive things” are happening for natural gas, said Lawler. He said there is more coal-switching for power plants, more exports to Mexico and liquefied natural gas exports could begin late this year.

Van Kempen said coal plants will continue to be retired, a positive for gas. “We’re not going to power the country on renewables. It’s not going to happen,” he said. Experts have called gas the “bridge” for renewables, but he said, “if we talk about it as a bridge fuel, it’s a pretty lengthy bridge.”

At the end of the day, Lawler said, “everything” supports more natural gas use. “But it will be a painful period to get it right.”