Following a review of how its climate-related policies align with their activities, BP plc is dropping its membership in three U.S.-based oil and gas groups and suggested other North American trade organizations may be on the tipping point. 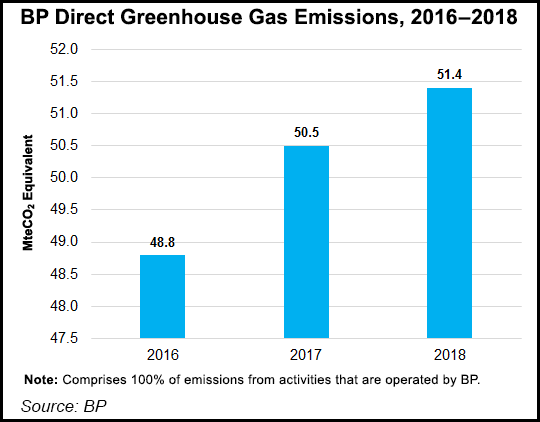 The move follows an announcement earlier this month in which BP said it would aim to become a net zero company by 2050 or earlier. Among the 10 goals outlined in its ambitions was to set expectations for relationships with trade associations around the world.

“Trade associations have long demonstrated how we can make progress through collaboration, particularly in areas such as safety, standards and training,” CEO Bernard Looney said. “This approach should also be brought to bear on the defining challenge that faces us all — supporting the rapid transition to a low carbon future. By working together, we can achieve so much more.”

The London-based major plans to “pursue opportunities to work with organizations who share our ambitious and progressive approach to the energy transition,” Looney said. “And when differences arise we will be transparent. But if our views cannot be reconciled, we will be prepared to part company.”

In the coming years, said Looney, he hoped “we can add climate to the long list of areas where, as an industry, we work together for a greater good.”

Over the past six months, BP reviewed how climate-related activities and policies of key trade groups aligned with the company. Thirty associations concentrated in North America, Europe and Australia were assessed regarding current and recent policy positions. The results determined whether the groups were aligned, partially aligned or not aligned with BP’s positions.

For the AFPM and WSPA, “BP found misalignments that could not be reconciled” because of “material differences regarding policy positions on carbon pricing…”

Material differences around the federal regulation of methane, as well as asset divestments in the states in which the organization is active, led BP to not renew its membership with the Alliance.

Executives with the three industry groups took issue with the reasoning behind BP’s withdrawal of support.

“Western Energy Alliance found itself highlighted in BP’s report on trade association participation, despite not ever having been contacted about its development,” said President Kathleen Sgamma. “Nor did BP bother to engage in Western Energy Alliance’s discussions regarding methane rules, which were open to all members.

“If BP had worked with us in advance of the report, it would have realized its assessment on reducing methane emissions is likely at least partially aligned,” she said. “In fact, Western Energy Alliance has highlighted multiple times the success industry has had in reducing not just methane emissions, but carbon dioxide emissions from the electricity sector as well. We promote continuous innovation, and industry’s decades-long record of success in reducing methane emissions.” The United States had reduced more greenhouse gas emissions “than any other developed country over the last decade because of increased natural gas electricity generation.

BP’s Lower 48 operations were rebranded as BPX Energy two years ago, and the unit is headquartered in the Rockies. However, some assets are being sold, which Sgamma noted.

“Perhaps the real reason BP didn’t bother to engage with us before issuing this report is that it had already made the decision several months ago to divest its assets in the Rockies. Since Western Energy Alliance advocates for environmentally responsible oil and natural gas development on federal and nonfederal lands in the Rocky Mountain West, BP didn’t need to participate in a region it no longer operates in. That is certainly a legitimate reason not to continue membership in the Alliance, but I suspect BP needed a few trades to put at the top of its pyramid in the glossy report.”

The Alliance members “do not suffer from a crisis of conscience that comes from listening to groups that want to keep all oil and natural gas in the ground,” she said, noting it is proud to stand up for the oil and natural gas industry and educate the public about the energy industry’s contributions.

“We are proud of our industry’s role in providing more meaningful reductions in greenhouse gas emissions than wind and solar energy combined, despite political favoritism for them by governments and intense campaigning against our industry by some of the same groups that now seem to be advising BP. We believe that free market solutions are more effective than grand government schemes.”

AFPM represents most of the U.S. refining and petrochemical industries.

“As an active member of our executive committee, BP knows full well that AFPM recognizes that climate change is real and that we are committed to engaging on and developing policies that enable our members to provide the fuels and petrochemicals that humanity needs to thrive in a sustainable way,” Thompson said. “They also know that AFPM has been actively promoting fuel policies designed specifically to reduce carbon emissions from the transportation fleet. For these reasons, we are left to assume that their decision to exit the organization was based on factors other than our actual positions on the issues.”

Regarding policies, the AFPM CEO said, “we — like any family — don’t always agree, but it is certain that more industry-wide progress is achieved through ongoing collaboration than without it,” he said. “We remain committed to delivering value for our members and their employees, the communities in which they operate, the environment, and the millions of people who rely on fuel and petrochemical products each day. We believe that BP’s decision to leave industry organizations like ours hurts their cause, not helps it.”

WSPA President Catherine Reheis-Boyd said the partnership would “look a little different,” but the group and its members “will continue to work with BP and all stakeholders to engage in a civil public discourse around creating a sustainable energy future. It’s hard work, and we don’t always agree, but it’s a mission worth serving.

“Our members know the way the world produces, distributes and consumes energy is evolving, and our industry will remain leaders in investing in and developing the diverse energy sources and technologies we need for the future. Working together as an industry, we will rise to the challenge of a changing climate.”

BP also identified five other groups “with which it is only partially aligned on climate.”

Listed among the North American associations only “partially aligned” with BP were the American Petroleum Institute, the Canadian Association of Petroleum Producers, National Association of Manufacturers and the U.S. Chamber of Commerce.

“BP has communicated these differences to these associations,” it said of the partially aligned groups. “BP has also communicated clear expectations with regards to climate positions and transparency to all associations within scope of the review.”

In an ongoing process, with another review planned in about two years, BP expects to “actively monitor its memberships, participation and alignment with trade associations to which it belongs and will provide periodic updates, internally to the board of directors and to stakeholders as appropriate.”