BP plc is reducing upstream staff globally from current levels of 24,000 to below 20,000 by the end of 2017, the oil major said Tuesday. U.S. operations would be affected. 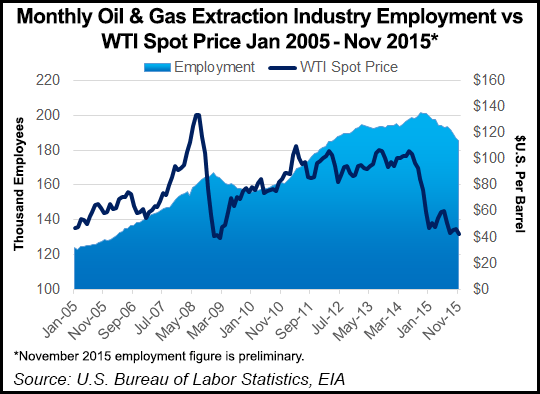 The London-based producer, the largest natural gas marketer in North America, employs close to 80,000 people worldwide in its integrated businesses.

About 600 of the new job losses are to be from the maturing North Sea operations, a spokesman told NGI. BP employs about 3,000 people in the offshore region. The overall staff cut, he said, “is part of a move being announced at a number of our offices” on Tuesday. He did not detail how many job losses may be from North American operations.

Even with the job losses, large investments are to continue, the spokesman said. For instance, the producer remains committed to the North Sea and plans to invest about $2 billion this year in the region, which would “sustain many hundreds of supply chain contractor jobs going forward.

“However, given the well-documented challenges of operating in this maturing region and in toughening market conditions, we need to take specific steps to ensure our business remains competitive and robust.”

BP management plans to speak “to our staff and agency contractor management and will work with those affected over the coming months.”

BP over the past three years has revamped its operations and sharply reduced its worldwide focus, which began following the Macondo well blowout in 2010 (see Daily GPI, July 29, 2015). BP had close to $10 billion of assets still set for disposal near the end of last year, which meant that more job losses would be coming. The upstream staff last year was about 8% smaller than in 2013, while corporate support staff had fallen 37% over two years.

The staff reductions have been across the board, most heavily among the largest operators.