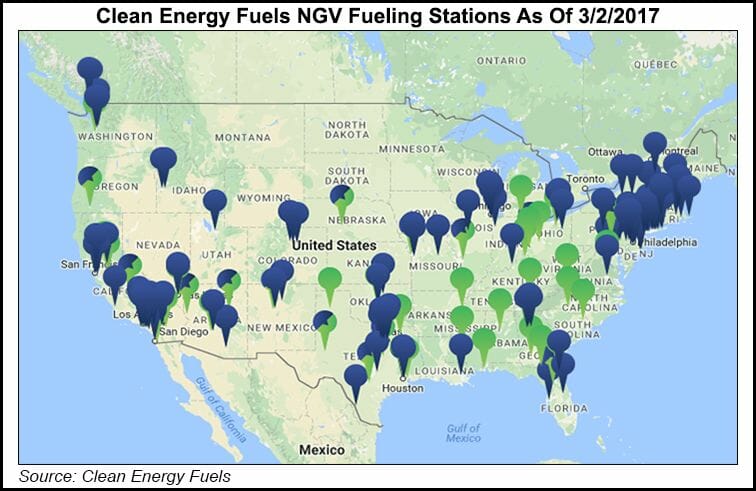 The transaction, set to close by the end of this month, would hand BP existing biomethane production facilities, share of two new facilities and third-party supply contracts for RNG.

Noting that demand for RNG is “growing quickly,” BP’s Alan Haywood, CEO for the supply/trading business, said the London-based producer was “committed to supporting developments toward a lower carbon future” and working with Clean Energy, based in Newport Beach, CA, is part of that commitment.

Marketed for the past three years as “Redeem,” biomethane/RNG has been a rapidly growing part of Clean Energy’s NGV fueling business, according to CEO Andrew Littlefair and Harrison Clay, president of Clean Energy Renewable Fuels.

RNG is produced entirely from organic waste and can be comingled with traditional gas in existing pipeline networks.

The agreement with BP would allow Clean Energy to expand its Redeem customer base at its network of North American NGV fueling stations, Littlefair said.

“Our focus will be on the downstream part of the business,” he said. “This allows us to concentrate on what we do best, and the deal allows access to downstream fueling infrastructure for BP; we’re looking at this as a partnership.”

Redeem RNG brand was launched three years ago in California. Clean Energy sold 60 million gasoline gallon equivalents (GGE) last year to customers across multiple states. Littlefair cited a clean air action plan by the joint ports of Long Beach and Los Angeles in Southern California that may require the thousands of trucks operating in the ports to switch to a renewable fuel.

Redeem’s annual sales figure could easily be tripled to 180 million GGE of RNG, according to Clay, who said he sees RNG as a “multi-billion-gallon” market eventually.

Having the association with BP “can only improve our ability to meet what we think is a growing demand for Redeem,” Littlefair said.

During acompanywide strategy session one day before the announcement on Tuesday, BP’s upstream chief Lamar McKay said the company’s nearly 12-year-old alternative energy unit is the largest of its oil and gas peers. BP’s U.S. wind unit alone has an estimated 1,432 MW of capacity.

He confirmed that BP is planning to invest around $200 million a year “to incubate and grow options” in the alternative arena. Regarding the RNG front, McKay said BP would pursue “potential opportunities…and plans on being part of this growing market.”

Separately late last month, the potential for a low-pressure fueling system for compressed natural gas (CNG)-powered vehicles was unveiled by a coalition that includes New Jersey-based Absorbed Natural Gas Products (ANGP) and Ohio-based A. Schulman Inc. The coalition is seeking to have original equipment manufactures (OEM) in the NGV space adopt a new fuel tank that can lower the pressure requirements for storing CNG from 3,500 psi to about 900 psi.

Two years ago, Fremont, CA-based Cenergy Solutions launched an adsorbed natural gas (ANG) endeavor to make the physical storage and performance of the NGV fuel delivery work better. The coalition is striving to develop NGV fueling systems that they claim will be “easier, safer and less stressful” for consumers to use.

By allowing the vehicles to use low-pressure tanks, the use of NGVs becomes “safer, probably easier to market to consumers, and more suitable to home use, since the tanks could be refilled overnight with relatively simple equipment running from a home’s existing natural gas lines,” said Schulman’s Doug Gries, director of market development and engineered composites.

Two years ago, Cenergy said its patent-pending technology might be capable of providing fueling tanks operating at 500 psi, rather than 3,600 psi, and a longer range for NGVs while cutting compressor costs in the fueling system by up to 20%. Last year the company was testing its ANG system on a F150 Ford pickup truck.

As part of its TMC pitch, Agility and Momentum Fuel Technologies, a unit of Rush Enterprises, are promoting “telematics compatibility” for their NGV fuel systems. Both said their systems are compatible with the latest advances in natural gas engines by Cummins Westport.

Meanwhile, in British Columbia, CNG fueling and transit bus advances were announced late last month with FortisBC providing up to $480,000 to BC Transit toward the purchase of more CNG buses. Fortis also has invested in Jordair Compressors for fueling the utility’s trucks and vans and for use by third party CNG fleet operators.

In addition, BC transit has spent $15.4 million on 24 new CNG buses in its Nanaimo regional district. The XN40 Xcelsior buses by New Flyer would make the regional bus fleet 100% CNG fueled.