BP plc’s ambitious reinvention, to move from fossil fuels toward carbon-free resources, was launched only days before the world began to shut down last year, but instead of shelving the plans, the company doubled down on the energy transition, CEO Bernard Looney said Monday on the opening day of CERAWeek by IHS Markit. 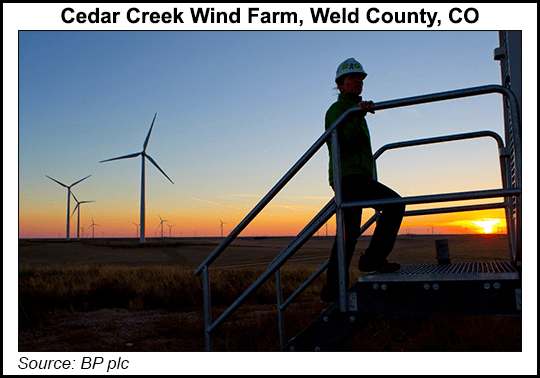 The weeklong conference, featuring a Who’s Who of the global energy industry, is being held virtually, helmed by IHS Markit Vice Chairman Daniel Yergin. Yergin, as he has done every year at CERAWeek, is serving as moderator on some panels, including one Monday morning featuring Looney and Amazon Web Services (AWS) CEO Andrew Jassy.

BP’s transition to move beyond petroleum by 2050 or sooner was launched about a year ago, shortly after Looney took the helm and shortly before the global pandemic lockdowns began. The roadmap to net-zero carbon was unveiled last September.

The pullback in energy demand was devastating, but BP was undeterred, Looney told Yergin. It’s what customers want, he said.

“Instead of putting reinvention on hold, we sort of doubled down,” the BP chief said. With the organization leaner, “we are better positioned today than we otherwise would have been. As the vaccines roll out..the pandemic recedes, and the economy rebounds, we will be poised for takeoff, so to speak.”

The reality, he noted, is that BP has been an oil and gas company for 112 years.

“This is a moment where we do have to reinvent the company, but we would like that to be a continual change process because the world continues to move so, so quickly. The reasons are clear. The world has a finite carbon budget. It’s burning out.”

All things being equal, BP also sees the energy transition as an “enormous business opportunity.” True, the “replumbing” is complex and is going to require billions in investment. However, “we think we can add something.”

To eschew carbon, though, is going to require consumers to do something radical, Looney said.

“It may sound like a surprising thing,” but one of the “most urgent things to address global warming is to back carbon-emitting companies that are committed to getting greener,” i.e., “greening companies.”

AWS has become a key supporter of BP’s carbon-free initiatives. The decision by AWS to partner with BP on renewables projects, underway for the past few years, may not have been easy. Some might have been deterred by BP’s “huge amount of emissions. Amazon didn’t say that…” The executives saw the partnership as a two-way street.

BP could provide the renewables, and AWS could provide the efficiencies. North America’s No. 1 natural gas marketer overall plans to boost alternative energy investments in 2030 to $5 billion, a 10-fold increase.

“We are going to grow shareholder value,” and “there is no greater example than what we are looking at doing with Amazon,” Looney said.

BP and Amazon in 2019 partnered on a series of innovative deals to supply AWS with renewable energy to drive the cloud platform. In late 2020, the partnership was extended, with BP agreeing to provide additional renewable energy to power AWS operations.

AWS in turn has helped transform energy companies, which are “looking for ways to free up resources” and expand their renewables offerings, Jassy said. Moving operations to the cloud “allows them to have much more of that capability” and ability to reinvent.

By the end of the year, BP expects to have up to 70% of its data in the cloud, Looney said. In addition to improving efficiencies, “We’re very much aligned on this being the way to go.”

Amazon last year was the “leading consumer of renewable energy in the world for a company,” and it continues to break records, Jassy said during the conversation with Yergin. The company is now on pace to be 100% renewable in all of its facilities by 2025, five years ahead of the original target.

It’s not easy or cheap to do, Jassy said. “It’s going to take a lot of investment…We’d rather be part of the solution,” and energy companies are proving to be excellent partners.

“It’s going to take all of us together to get there,” Jassy said.

He explained how Amazon manages to remain a vibrant company.

“If you want to be a company for a long period of time…you have to be able to reinvent yourself, sometimes many times over,” he said. “You have to have the right reinvention culture.”

However, a leader has to “get the real data of what’s happening in the competitive landscape. When they see there are issues, they have to have the courage to pick the company up and change course…

“Part of it is the willingness to fight established norms,” and yes, “not try to fight gravity…If it’s good for the customers, it’s going to happen.”

Leaders can attempt to “howl at the wind and wish it away as many companies do, or they realize it’s better for customers and embrace it.” Jassy said it was better for a company to “cannibalize” than to avoid fighting what has to be done to survive.

A company has to “have the people willing to lean forward” and learn, Jassy said. Amazon doesn’t invent processes “that are cool,” but rather “what matters to customers.” Decisions also cannot be made at the drop of a hat.

At Amazon, change is “very intentional,” he said. “When we think about Amazon in general and AWS, we still think as a big startup. We have a lot more people and processes and structure, but we really think of ourselves as insurgents. We look at really important customer problems,” then it hires “builders who are really passionate about inventing and solving customer issues. We keep listening to customers.”

Looney said “clearly, customers’ actions have to change if we want to help the world get to net zero. But it’s not enough to lay it at the door of the customer. We have to change offerings to make it easier for customers” to choose.

BP, like Amazon, is working to understand its customers’ problems, Looney said. There are “pain points,” which are the “core to success, and it sounds obvious. But when you listen to Andy and his team, they’ve engrained it in their DNA. They live and breathe it…That’s one of the things we’re taking from the partnership: how to build it into our company and be more focused on meeting customer needs versus the past, where we are focused on production of resources.”