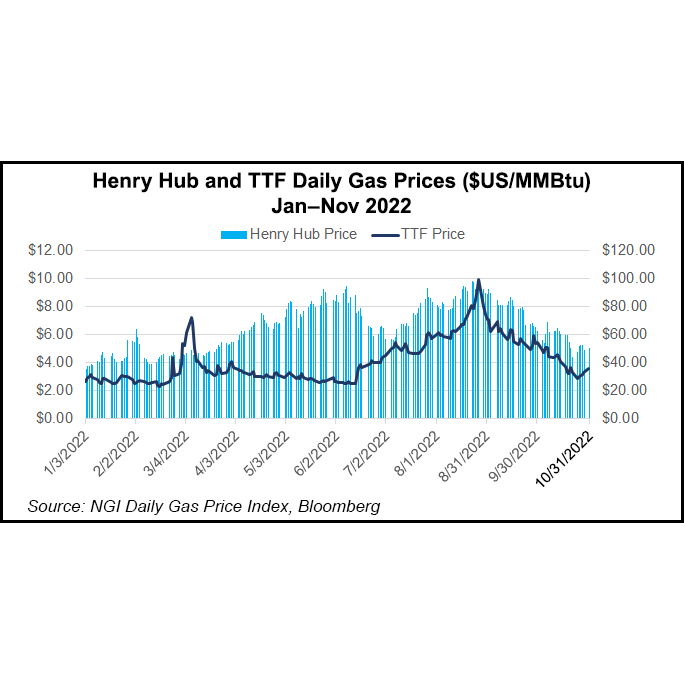 Breaking down the supermajor’s quarterly results on a conference call, CFO Murray Auchincloss said that reduced Russian pipeline imports to Europe “led to sharp increases in both spot and futures prices” on the continent, with the quarterly average Title Transfer Facility contract rising by 92% sequentially.

“Looking ahead to the fourth quarter, we expect gas prices to remain elevated and volatile with the outlook heavily dependent on Russian pipeline flows and the severity of the Northern Hemisphere winter,” Auchincloss said.

The Brent oil price, meanwhile, averaged $101/bbl during 3Q, down from $114 during the second quarter. “This reflected increased uncertainty around the economic outlook and the continued Covid-related lockdowns in China,” Auchincloss said. “Despite this uncertainty, we expect oil prices to remain elevated in the fourth quarter given the backdrop of low inventory levels, OPEC-plus supply cuts, limited supply growth and uncertainty around Russian exports.”

BPX Energy had an average of seven operated rigs running during the period, including three each in the Haynesville and Eagle Ford shales, and one in the Permian Basin.

BP is maintaining full-year capital expenditure (capex) guidance of around $15.5 billion for 2022 if the company’s acquisition of biogas producer Archaea Energy Inc. is completed before year-end.

Over the medium-term, BP is maintaining a forecast annual capex range of $14-16 billion.

BP expects the Archaea transaction to reduce the firm’s carbon intensity, “deepen our participation in the rapidly growing biogas sector,” and “add distinctive value as we integrate biogas supply from Archaea Energy with our experienced trading business and global customer relationships,” according to Auchincloss.

Other clean energy ventures include a planned collaboration with Hertz Global Holdings Inc. to install a North American network of electrical vehicle charging solutions for the rental car company.

In Australia, BP also closed the acquisition of a 40.5% stake in “one of the world’s largest planned renewables and green hydrogen energy hubs.”

Recent milestones for BP’s upstream business include the completion of Azule Energy, a joint venture in Angola with Eni SpA; a final investment decision on the Cypre gas project offshore Trinidad and Tobago; and an agreement to divest BP’s Algeria assets to Eni.

“This quarter’s results reflect us continuing to perform while transforming,” said CEO Bernard Looney. “We remain focused on helping to solve the energy trilemma – secure, affordable and lower carbon energy.”

He added, “We are providing the oil and gas the world needs today – while at the same time – investing to accelerate the energy transition. Our agreement on Archaea Energy is the most recent step in our strategic transformation of BP.”

BP reported oil and gas production for the quarter of 1.317 million boe/d, largely flat with 3Q2021.